Snowfall In Sahara Desert- Signs Of Climate Change Or A Pleasant Surprise? 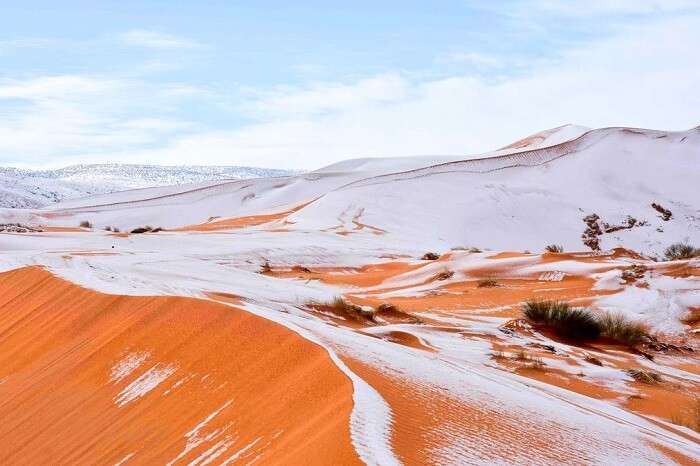 Every season brings its surprises and this time, it happened at the hottest place on Earth. For only the third time in 40 years, people witnessed snowfall in the Sahara Desert. A freakish winter phenomenon that turned the arid desert mounds of Algeria into a delightful mixture of white and brown. Is this yet another worrying indicator of climate change or a rare modern-day miracle?

Yes! You heard it right. The world looked in awe and amazement as Ain Sefra- a tiny town in Algeria experienced 40 cm snowfall a few days ago. With Europe facing a harsh and cold winter, the cold southern winds blew into Africa bringing some moisture, drop in temperature, and snowfall.

Where did people witness Snowfall in Sahara desert?

In Northwest Algeria, a small town by the name of Ain Sefra witnessed a modern-day miracle when, for the first time since 1979, the Sahara Desert experienced snowfall. 15 inches of snowfall on the brown and arid sand dunes was one of the most pleasing sites for locals and tourists visiting the country.

Although the town is in the Atlas Mountain range that spreads over from Morocco into Algeria, the area is still pretty arid for any other day of the year.

How did it happen?

Cold winds from Southern Spain helped create such conditions that led to snowfall in Sahara desert for the first time since 1979. Upon hearing the news, tourists in the vicinity rushed towards the choco-white dunes for a chance at clicking some once-in-lifetime pictures on their phones and camera.

Despite the town experiencing record lows of under zero degrees throughout the winter season, this snowstorm was an unexpected miracle that the citizens of this town will remember for ages.

While in the recent past, many influential international forces have been in denial of climate change- could this snowstorm be considered as yet another fragment of the inevitable evidence of climate change? Could this incident be a part of the recent global chain of events that led to horrible natural calamities like Hurricane Irma, California Wildfires, or the fatal flooding in Sierra Leone?

While we leave the simmering discussion for you guys, we’re gonna conclude this extraordinary event with a positive undertone that urges you explore, and witness more such wonders of mothers nature. Share your incredible experiences and concerns about climate change with us in the comments section below.