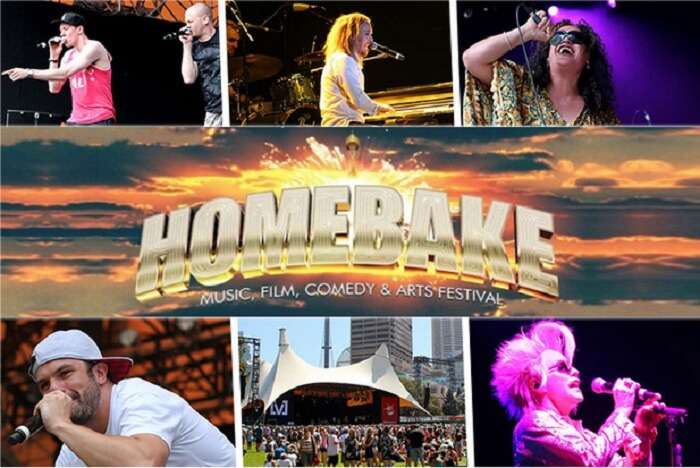 Australian music festivals ensure a great musical extravaganza around the year. And no, we are not talking about the Sydney Opera House or other music academies’ shows.

Rather, we are talking about camping festivals in secluded forests and on picturesque mountain tops, raves in the middle of the bush, and the city gems – all complete with brilliant lineups.

So, without further ado, we present a list of 11 best music festivals in Australia that you must attend.

Strawberry Fields hosts one of the finest Melbourne music festivals. However new, the music bonanza has slowly gained recognition as one of the best niche festival experiences in Australia.

Image Source
Homebake doesn’t boast of any awe-inspiring lineup unlike some of the other Australian music festivals in our list. The atmosphere and unbelievable rush for tickets make this one of the best. And interestingly, it is not just music, Homebake also includes films, stand up comedies, and fine arts.

4. Festival Of The Sun

Image Source
The outdoor Australian music festival has been in the circuit since 2001 and has quietly carved a niche for itself. With a small audience of about 3,000 attendees and a single stage, FOTSUN has the exact carefree vibe that you seek from music festivals.

Suggested Read: 21 Best Resorts In Australia For The Perfect Vacation Down Under

Image Source
The New Year’s extravaganza—Beyond The Valley Music Festival in Australia—provides an excellent experience of camping in tents and watching performances by artists such as Aston Shuffle, Ball Park Music, Danny Brown, Peking Duk, and the Preatures.

Image Source
From a modest start in 1993 as the Rock Above The Falls Festival held in Lorne to the Best Lineup Award in 2008, the Falls Festival has come a long way. Falls has seen performers including Santigold, The Kooks, The Yeah Yeah Yeahs, and Grizzly Bear in recent years. Tickets (especially for Lorne) are hard to get your hands on but it is totally worth it.

Image Source
Since the 1992 launch of the festival with the dream lineup of Nirvana, the Violent Femmes and You Am I, the Big Day Out has been considered a premiere music bash. Over the years, the festival has been headlined by top performers including Iggy Pop, The Ramones, Marilyn Manson, Red Hot Chilli Peppers, and Neil Young. Though the 2015 event got cancelled, it is back for its 2016 edition with the famous Red Hot Chilli Peppers and the Killers among the long list of performers.

Image Source
St Jerome’s Laneway Festival was started in 2004 to celebrate the claustrophobic urban lanes of Melbourne. It might lack the vast musical range or genuine A-listed performers of the other top music festivals in Australia, but its excellent summer atmosphere and rich cultural experience has led to its exponential growth since its inception.

Image Source
Melbourne music festivals provide the best dose of jazz, blues, and funk. With legendary venues, such as the Bennett’s Lane and the Hamer Hall, the city has played host to world class musicians. But, it was the appearance of the legendary pianist and composer Herbie Hancock in 2007 at the Melbourne International Jazz Festival that made the festival so famous.

11. Splendour in the Grass

Image Source
One of the finest music festivals in Australia, Splendour in the Glass has been held annually since 2001 at Byron Bay. However, it was held at Woodford in Queensland in 2010 and 2011. The backdrop of Byron Bay gifts the festival with an aura of open-air yoga sessions too. We recommend making hotel reservations early on for a comfortable stay during the 3-day bonanza.

With some amazing lineups in the aforementioned Australian music festivals, you can be sure to have a gala time down under. So, grab your tickets before they are all sold out.

Disclaimer: Some of the other amazing yesteryear’s Australian music festivals, such as the V Festival and Park-life Festival, have been discontinued. Though speculations of their return are in the air, but we’ll have to wait till it is official.

Gold Coast In December: A Pocket Guide For A Thrilling Holiday In The Aussie Land