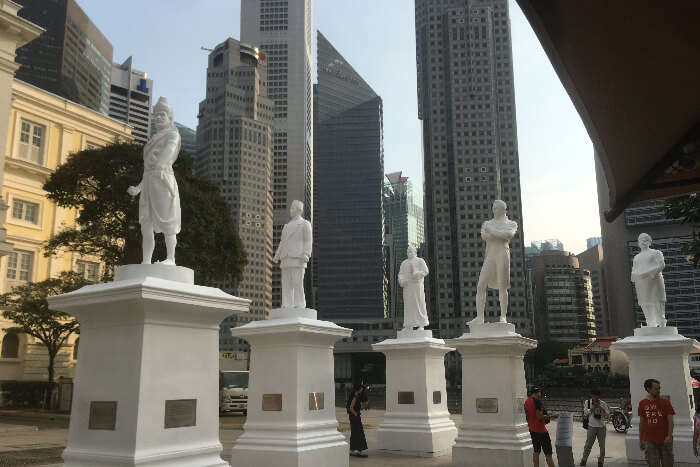 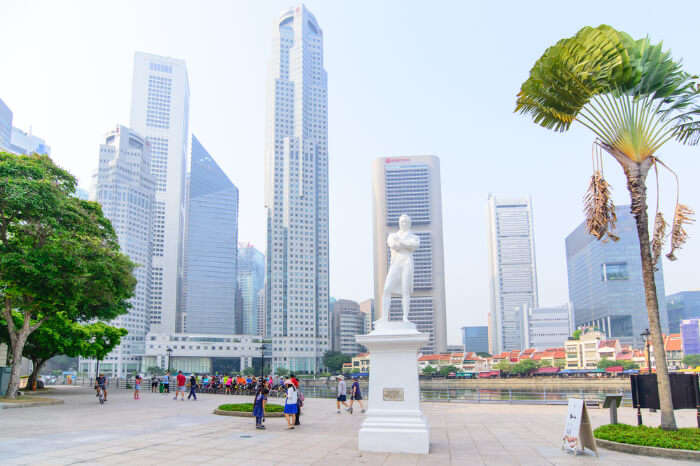 Raffles’ Landing Site is located on the northern bank of the Singapore River. On 28 January 1819, Sir Stamford Raffles set his foot at this site and spent 10 days here. While he stayed here, Sir Stamford Raffles concluded the first treaty with this region’s local rulers. A striking feature of this place is the stature of Sir Stamford Raffles’ which has been placed at this site. The original statue of this former Governor General of the Dutch East Indies was made in 1887 and is currently stands opposite to the iconic Victoria Concert Halls. The statue that you see now at the site is made of poly-marble using the plaster casts of the original statue. This new statue was unveiled in 1972, and holds an inscription stating “On this historic site, Sir Thomas Stamford Raffles first landed in Singapore on 28th January 1819, and with genius and perception changed the destiny of Singapore from an obscure fishing village to a great seaport and modern metropolis.”

On the 200th-anniversary celebration of Founding of modern Singapore, in 2019, various creative modifications alterations were made to Sir Stamford Raffles’ statue and the area around it. One of the most astonishing and attractive alterations on the state was camouflaging it with the buildings structures in the background at the Raffles Place. This was done to create a ‘disappearing’ illusion of the statue of Sir Stamford Raffles. Installing some statues of the contemporaries of Raffles including Munshi Abdullah, Tan Tock Seng, and Naraina Pillai along with the statue of Sang Nila Utama, the founder of the Kingdom of Singapura was another alteration in this respect. The site has been a popular tourist spot and is visited by travelers from around the world. This place also holds a lot of significance in the history of Singapore.

Singapore is a beautiful island nation and is blessed with many scenic beaches. Here are some of the best and the most pristine beaches near Raffles’ Landing Site in Singapore which you should surely explore to turn your holiday in this Garden city into a beach vacation: 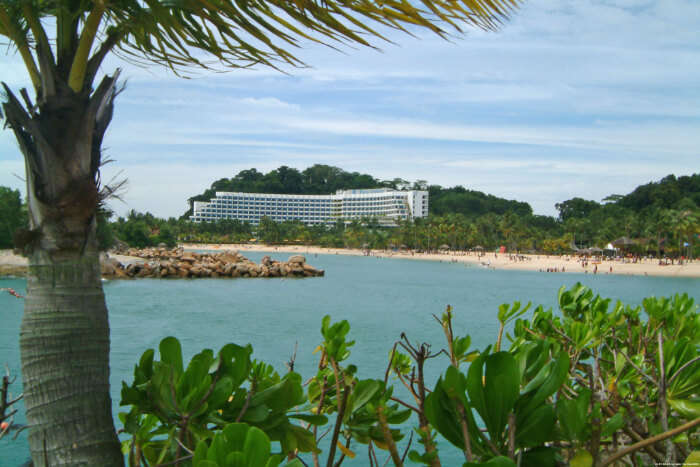 This amazing Beach hosts some of the biggest and happening celebrations for the new year in the island city-state. There are some delicious restaurants here which offer bountiful of food and the bars will let you get your groove on. So get into your swimsuit, take a dip in the warm waters or you can simply unfold your Beach umbrella and sunbathe. Then sip some delectable drinks at the bars or indulge in an impromptu shopping spree. When night finally arrives, then feel the spirit of this venue with amazing parties. 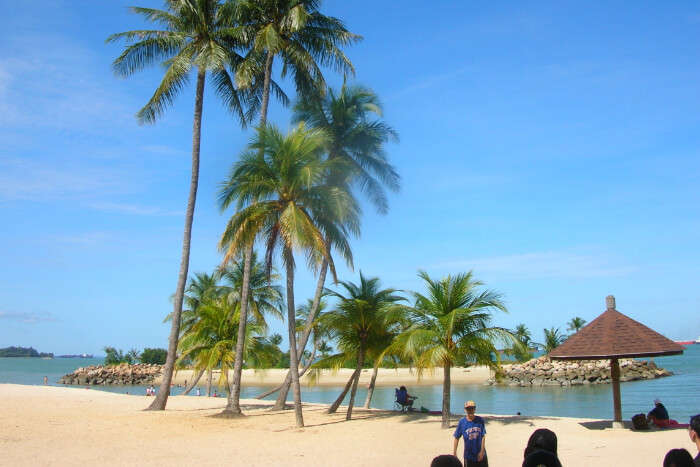 Located at the Sentosa Island, it is famous for its backpacking population and also the nature admirers who come here for some greenery. Bring a beach towel, sit on the golden sands and enjoy the weather as you sunbathe. This is a great place to visit for those who want some peace and tranquility. Make sure you stay till dusk to see the waters and sky change its colors with the time of nature. The sands are clean and here there is an atmosphere of bliss. No need to worry if you get hungry while here. There are a lot of themed bistros, restaurants and bars which will help you quench your thirst and hunger. The beach bars don’t open till 11 am, so take a note of that. 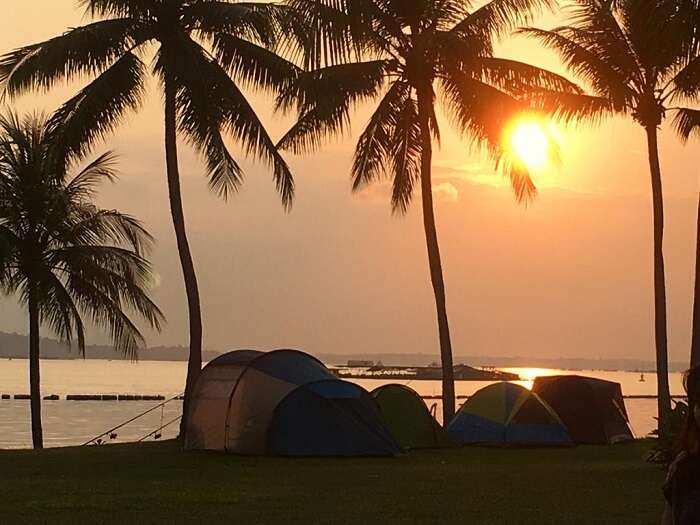 Among the largest beaches in Singapore, Pasir Ris Beach is a wonderland for kids and adults alike. The 6.6 km long beach is lined up with lush mangrove forests where you can have your share of adventure. Enjoy having a picnic by the beach under the sun and surrounded by the cool ocean breeze. The views of the ocean from this beach are also breathtaking.

Famous for:Picnics and natur walks, park
Facilities available: There is a cycling track, park, and a playground area which also features play-station

Read More: 15 Best Beaches In Singapore In 2022 That Makes It A Beach-Heaven

Are you excited about visiting these beaches near Raffles’ Landing Site? This is your chance to enjoy some of the best days in Singapore. So, plan a trip to Singapore as soon as possible.

10 Ireland Beaches To Enjoy The Atlantic Ocean Views In 2022 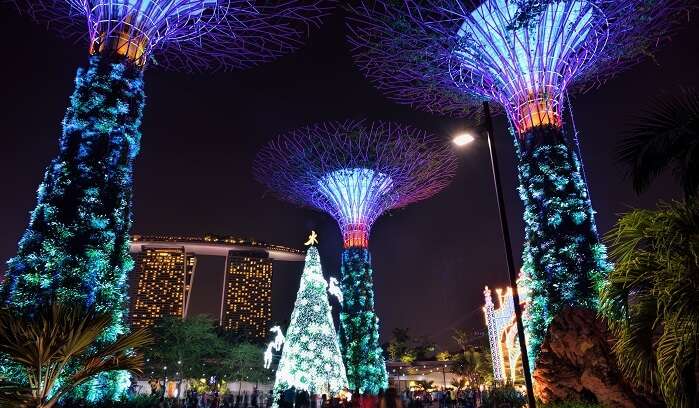 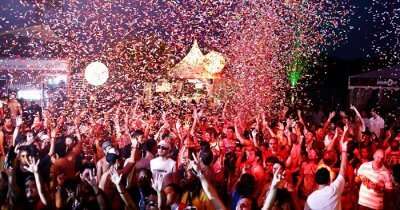 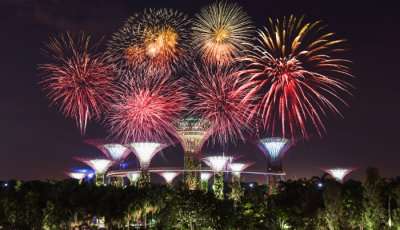