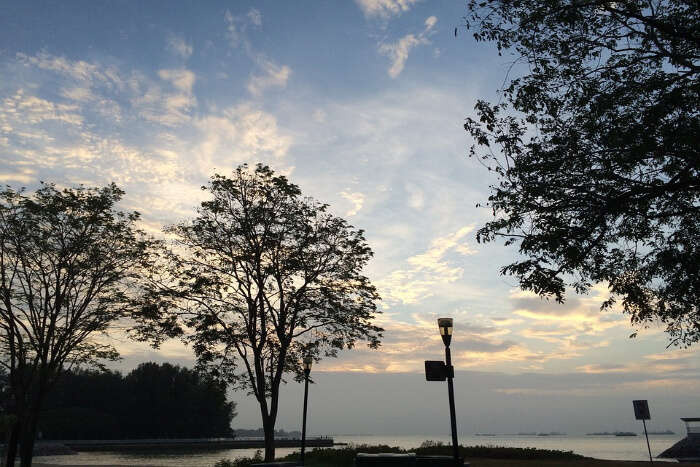 Here are the popular bridges near East Coast Park Singapore that you can visit with your partner. They look romantic and stunning especially at night with the beautiful lights.

Spanning the Geylang River, the Tanjong Rhu Bridge was built in 1998. This bridge enabled residents of Tanjong Rhu to easily pass to the Singapore Sports Hub. This bridge was inaugurated on 4 August 1998 by the Ministry of National Development’s then Parliamentary Secretary, Koo Tsai Kee. The unique design of the bridge was given by the Public Works Department, a company that was later privatized and renamed CPG Corporation Pte Ltd) with the help of engineering consultant Murray North (SEA) Ltd. The construction of Tanjong Rhu Bridge was completed in July 1998. It costed S$5.1-million to build this 130 m long and 4 m wide bridge. It is suspended on 100 hangar cables that are 1-inch-thick are connected to 2 main cables of 4.5-inches-thickness. These main cables are further anchored to an “A” shaped frame that is 19-meter-high and are located at both tips of the bridge. The Tanjong Rhu Bridge makes it convenient for the residents of the Tanjong Rhu district and the rest of the public to cross the Geylang River and reach the Singapore Sports Hub.

The vehicular bridge called Anderson Bridge is built across the Singapore River. It is situated in Singapore’s Central Area, within the close proximity of mouth of the Singapore River that comes within the Downtown Core Planning Area. The construction of Anderson Bridge was finished in the year 1910. It gets its names from Sir John Anderson, who had officially inaugurated the bridge. He was the Straits Settlements’ Governor and the Federated Malay States’ High Commissioner for the period of 1904 to 1911. Anderson Bridge bridge was opened to the public on 12 March 1910. This popular bridge is also a part of the Marina Bay Street Circuit of the Singapore Grand Prix. This Marina Bay Street Circuit was started on 28 September 2008. The construction of this bridge was carried forward under a joint venture by the colonial government, and the Municipality of the country, after the reclamation of the south bank of Singapore River. The work was carried out between 1908 to 1910. This bridge flaunts a combination of detailed plasterwork and metalwork. Another highlight of the bridge is its steel arches that get support from a network of steel ribs. At each end of the Anderson Bridge, there are also two fluted piers.

Anderson Bridge has an interesting architectural design which attracts tourists who come to Singapore. It also offers amazing scenic views of the city and the serene Singapore River. The bridge was built under the supervision of Robert Peirce, a Municipal Engineer. This bridge was a substitute to the Cavenagh Bridge which was facing an issue of overloading. It was the connection the major spots in Singapore including the official administrative area in the Civic District located on the northern bank and the Raffles Place located on the southern bank of the Singapore River.

Plan a trip to Singapore and explore the above-listed bridges near East Coast Park Singapore.