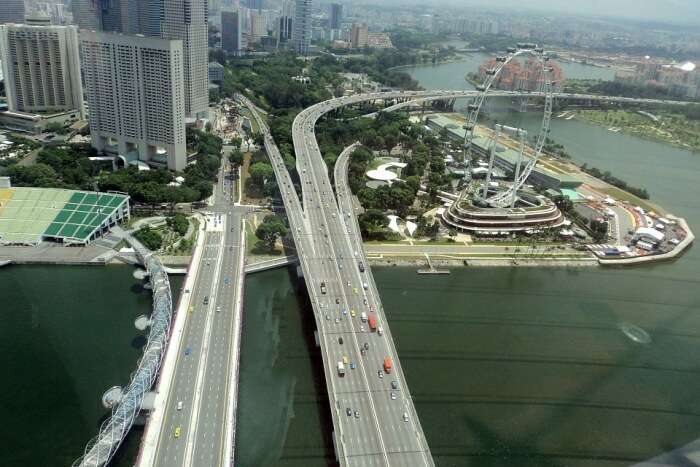 Singapore is renowned in the world by the name Garden City – this is in view of the lush greenery as well as constant efforts being made in order to make the whole country green since the time of independence. However, it’s not only the gardens that define the essence of the country. The country is a blend of natural as well as architectural marvels. Beaches and gardens are a must visit for nature lovers while the skyscrapers and bridges will fascinate those who have a thing for architecture. Bridges in this country form an important part of the Singaporean architecture. You’ll find various bridges near Merlion Park as well. These bridges not only connect the two areas of the island city state, they give us an insight to the history and development that happened over the years.

The Southeast Asian country has been one of the most-visited places in the world and rightly so. The skyscrapers, beaches, and some heritage monuments make this place one of the major attractions in the world. The culture in this country has been inspired from various other cultures and therefore becomes another major reason to attract people from different regions of the globe.

The Merlion Park in Singapore is one of the most-explored tourist attractions. Situated in One Fullerton, it is essentially a major landmark of the island city state. Moreover, the sculpture is widely used as a symbol of Singapore. It features the head of a lion on a fish’s body – a creature that is mythical.

The statue is 8.6 metres tall and spouts water from that height – a mesmerising sight to behold! The design of this statue has been given by the Singapore Tourism Board. This is one of the attractions tourists would always prefer to cover on their visit to the country of Singapore.

There are various prominent bridge located at a close distance to this site. Some of them have been mentioned in the list that follows!

This is one of the pedestrian bridges in Singapore, constructed over the Singapore River. Lying at Clarke Quay in the Singapore River Planning Area, the bridge was inaugurated in the year 1886. It replaced a knocked down footbridge that was known by the name ABC Bridge. The original name of this bridge was Ordnance Bridge and the new one is nothing but its abbreviated form.

This bridge is 261 metre long and it is spanning across the Singapore River and the Esplanade Theatres lies in the bay of its northern end while the Merlion Park lies in the southern end. Located in the Downtown Core, Esplanade Bridge is one of the arch bridges in the country of Singapore that began to be used in the year 1997. Along with Anderson Bridge, this bridge has been a part of F1 Marina Bay Street Circuit since the year 2008.

Singapore is known for its skyscrapers, monuments, and awe-striking tourist attractions like Merlion Park. However, the country’s essence lies in more sites as well and bridges are one of them. Your vacay in Singapore will be a one-of-a-kind experience if you’ll combine your visit to these bridges with the Merlion Park visit. Consider the above-listed bridges near Merlion Park to make the whole sightseeing experience comprehensively amazing!

Singapore Zoo: For A Fun Day In The Wild

Great Singapore Sale: All About The Retail Therapy Event In The Lion City!