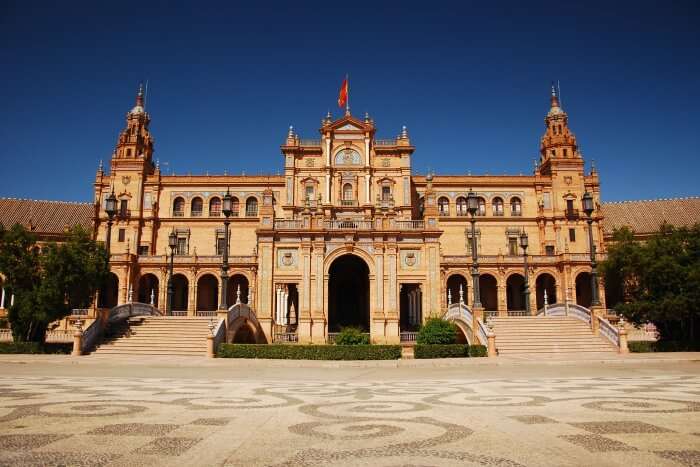 Castles are always enchanting and speak of the very many battles that it has witnessed and the kings and queens that once resided in them. Some elegant and some grand, castles have been a medium through which we have known about the royal families and their lives. Castles in Seville are no different. This province in Spain has some of the most beautiful and oldest palaces, not just in the country, but in the world perhaps.

Castles near Seville, Spain are monuments of grandeur and some in ruins, that have stood through the good and bad times of the royals who resided in those castles.

This castle In Seville, Spain, located in the heart of this province, is one of the oldest functional palaces in the world. The palace, which has stood through different eras and time, is a perfect blend of Christian and Mudéjar architecture. The grandeur of the Renaissance period and marks of the Borbon royals can also be found in the castle. The tiled alters and the painted altarpiece, reminds you of the renaissance period, and so does the various rooms of Carlos V. From the Borbon rule, you can see the crystal lamps from La Granja and the furniture, among others. It is no surprise then that it is a UNESCO-listed palace complex. Among other things, the Palacio de Don Pedro is the crowd-puller and so are the courtyards. Overall, the Alcazar Castle in Seville, Spain, it is a magnificent piece of history and architecture.

Must Read: 8 Top Things To Do In Seville – The City Of Pride In Spain

This is one of the best castles in Seville in terms of beauty. The palace, named after St. Telmo, the patron saint of sailors, was actually built as a university seminary. It soon became the residence of the Dukes of Montpensier, after which the palace got its north wing, east wing, and a ballroom. The most visible part of this palace is its very many portals, amongst which, the portal by Leonardo de Figueroa and the very many popular eminent people from Seville by Antonio Susillo are the most popular. The chapel of the Palace is the next best part of this magnificent architectural delight. It is an amazing blend of Andalusian and Spanish art, and the interiors of the chapel will just leave you in awe. The Palace once had even a private jetty, which had complete access to the Guadalquivir river. The garden of the palace is now known as María Luisa park, after the Queen Consort of the country.

This palace, located on the hills of La Sabika in Granada, is named so because of its walls that are red in color, which means Red Castle in Arabic. When we visit the palace, we know why that spot was chosen to build it. It has the view of the whole city and that view is spectacular. It is surrounded by ramparts of weird shapes. It was when the first king of Nasrid dynasty, Mohammed ben Al-Hamar, arrived that it was established as a royal residence. The Watch Tower was built during his reign, but it was during the reign of Yusuf I and Mohammed V, that the palace was improved upon. It was they who built the Patio of the Lions, the Justice Gate, and even the Hall of the Boat. The architecture of this palace is unique in its way with columns in the shape of cylinders with rings on the top and decorative elements like the moca/.rabe, the signs of which can be seen in various parts of the Palace complex. The walls of the Alhambra are adorned with calligraphy, cursive and Kufic writings, and even poems. It is one of the most beautiful castles near Seville, Spain.

The castle is located in the town of Huelva, just an hour and a half drive from the capital of Andalucía. This Roman castle has had various successors - Tartessians, Romans, Visigoths, Muslims, and Castilians – the castle has stood through various eras and various dynasties. Presently, it has several themed rooms such as the Countess Chamber and the Armoury. There are also two underground levels, which houses more than 30 instruments and torture machines. From the castle, you get a great view of the city and the Tinto river, which is just a splendid view.

Suggested Read: Museums In Seville: 9 Places You Must Visit To Witness Spanish History And Art

The castle is located in a very interesting part of town, the highest point of the rock on which the town sits. It is an arduous task to climb up to the castle and it might tire you out, but believe us when we say that the herculean climb is going to be totally worth it. What makes the climb worthwhile, are the stunning views that it offers. From up there, you can see the whole town, the reservoir, nearby towns such as Algodonales and Olvera, and also other fortresses around the castle. As far as the castle itself goes, only some walls have been preserved, as well as The Keep. The incredible structure of this castle will blow your mind, to say the least.

Suggested Read: 10 Places Where You Can Experience The Best Of Seville Nightlife

This castle too is located on the highest point of the town, which is located on a rock. It acts as a border between Cádiz and Seville provinces. It was part of the defense system of the Nazarí Kingdom of Granada. It has an irregular shape since it is on a rock and it has taken the shape of that rock. The castle, which was built in the 12th century has an access door which is protected by a barbican and topped with a shield. The fortress has a single access door, protected by a barbican and topped with a shield. The wall that surrounds the town is an extension of the walls of this castle. The Keep and the Two Towers are the most conspicuous things of this castle. Keep is in the shape of a rectangle and has some loopholes. The towers, in the shape of a circle, is topped with tile spiers.

Suggested Read: 9 Best Things To Do In Seville in December To Enjoy A Great Winter In The City!

This castle, located on an island at the mouth of the Caño de Sancti-Petri, is connected to one of the most famous observatory temples, the Templo of Melqart-Hercules. According to the historians, this was the temple in which Hercules was buried, who is also considered the mythical founder of Cádiz. The island was used for fishing activities and therefore, a watchtower tower was built. Due to the constant assaults and looting of Berber, English, and Anglo-Dutch, a defensive tower was also built. Then, rooms that served as accommodation for the troops was built. These days, the castle serves as a cultural resource, where you could learn the history of the place and be witness to some stunning views or even enjoy some water sports.

Further Read: Top 10 Street Food In Seville You Must Devour On Your Holiday

Here were some castles in and near Seville, Spain, which are definitely worth a visit. Castles in Seville and the surrounding areas is what makes Andalucía and also Spain, so magical in every way. Some of these castles are still working till date and the ruins of some other castles remind of the glorious past and the brevity of this colorful country. So, when are you heading to Spain?