Char Dham Yatra: A Journey That Will Take You On A Quest For Moksha 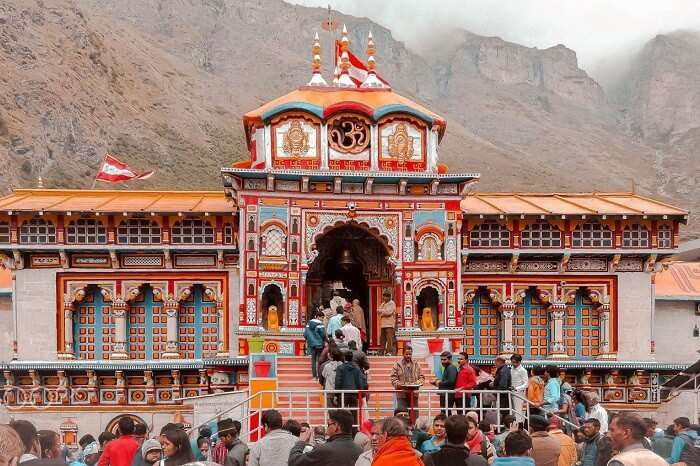 India is a land of Devis (Goddesses) and Devatas (Gods). The number is an astounding 330 million and no less! And so, not surprisingly, the country is replete with holy shrines and temples. Adorned with the remnants of the rich Hindu mythology, India has clusters of pilgrimages spread across its vast boundaries. Amongst these, the Char Dham Yatra holds a significant spot.

What Is The Char Dham Yatra? 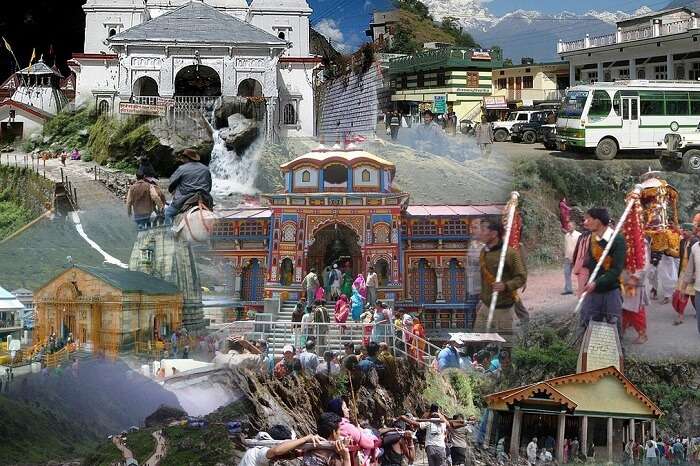 Literally translating to the pilgrimage to the four abodes, the Char Dham Yatra refers to the four holiest pilgrimage sites in India, viz. Badrinath (Uttarakhand in North), Rameswaram (Tamil Nadu in South), Puri (Odisha in East), and Dwarka (Gujarat in West). However, they are often confused with the 4 sacred destinations of Uttarakhand – the Devbhoomi. These Char Dhams – Badrinath, Kedarnath, Yamunotri, and Gangotri – are, in fact, a part of the small circuit of four seats or the Chhota Char Dham Yatra. 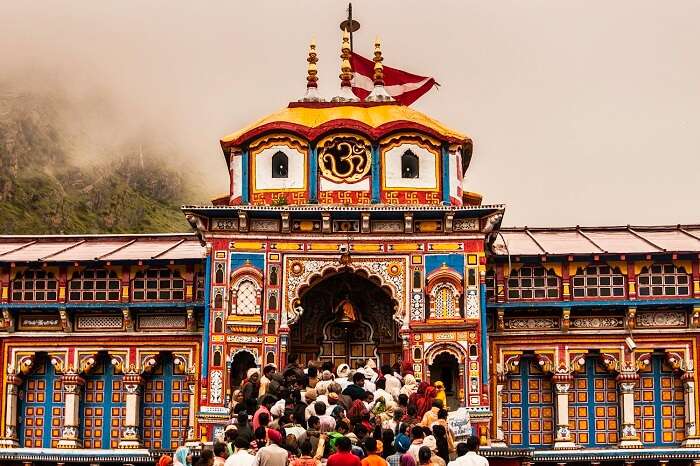 In the Garhwal hills of the present day North Indian state of Uttarakhand, the town of Badrinath lies on the banks of the Alaknanda River, between the Nar & Narayana mountain ranges. The main deity here is the Lord Vishnu, worshipped in his aspect of Badrinarayan. 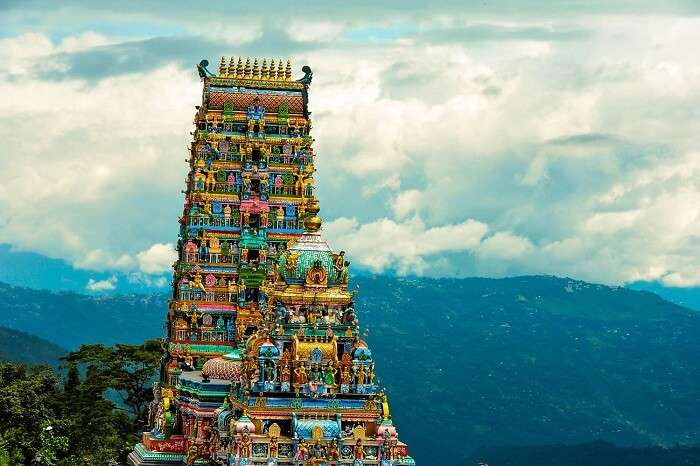 Situated in the Gulf of Mannar in the present day Tamil Nadu in South India, Rameshwaram is said to be the place from where Lord Rama built the Rama Setu Bridge to Sri Lanka. However, the Ramanathaswamy temple in Rameshwaram is dedicated to Lord Shiva, worshipped in the form of a linga of Sri Ramanatha Swamy. The linga is said to be one of the 12 Jyotirlingas (Radiant signs of Lord Shiva). 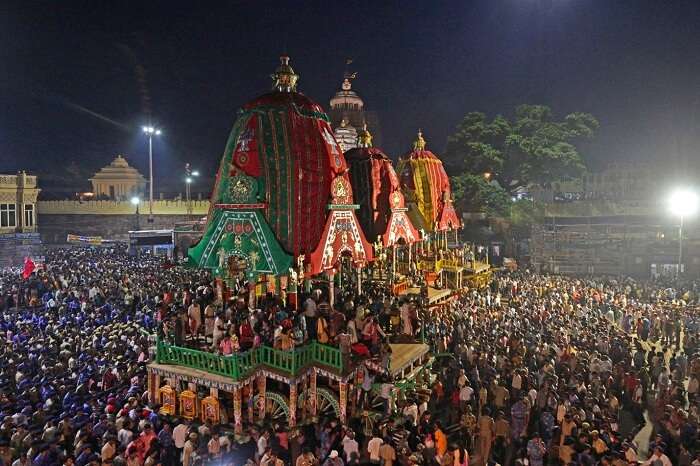 Located in the present day Odisha, Puri is one of the oldest cities in East India. The main deity in this Vaishnavite pilgrim center is Lord Krishna, worshipped as Lord Jagannatha. This is the only Indian shrine where goddess Subhadra – sister of Lord Krishna – is worshipped along with her brothers, Lord Jagannatha & Lord Balabhadra. 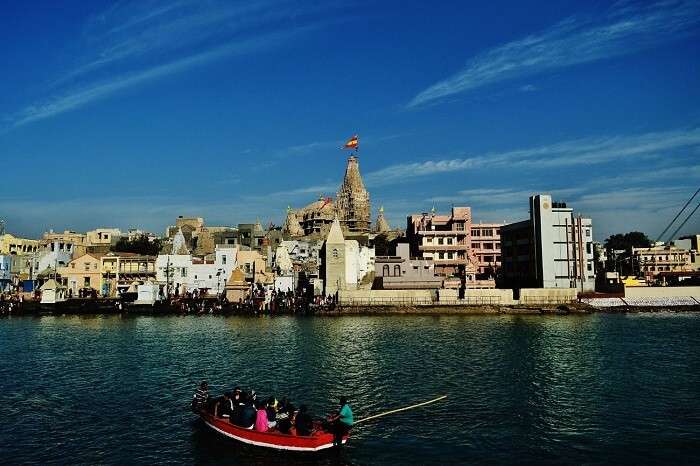 As per the Hindu Puranas, Hari (Vishnu) and Har (Shiva) are said to be eternal friends. It is said that wherever Lord Vishnu resides, Lord Shiva doesn’t reside very far from it. And so, these Char Dhams have their brother towns. The Vaishnav sites of Badrinath, Rangnath Swamy, Dwarka, & Jagannath Puri have the Shiva sites of Kedarnath, Rameshwaram, Somnath, & Lingaraja Gupteshwar located nearby.

The concept of the Chhota Char Dham Yatra became popular after the Indo-China war of 1962 as India began investing in road and infrastructure development projects. The improvement of roads in the area made it easier to access the holy shrines and other places of Uttarakhand, erstwhile Uttar Pradesh. The Chhota Char Dham slowly began to replace the original Char Dham.

Unlike the original Char Dham that took over a month to cover, the Chhota Char Dham could be covered within a fortnight. The cost difference between the two was massive. Now, more people could easily go on this pilgrimage. Pilgrims could travel in buses and jeeps to nearest points of the 4 shrines, within 10 – 15 km from the nearest motorable point. 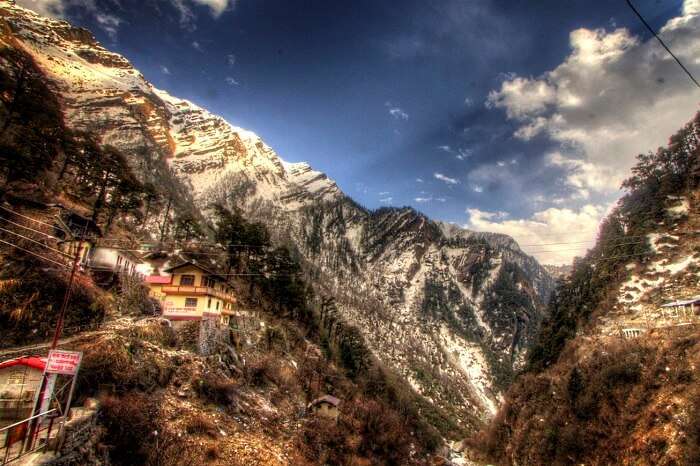 Yamunotri, the seat of Goddess Yamuna, is the source of the Yamuna River. The actual source and glacier is located at an altitude of 4421 meters above the sea level, about 1 km further up. But it is not easily accessible. For the same reason, the shrine has been located at the Yamunotri Temple at the foot of the hill. Pilgrims offer prayers at the temple itself.

Legend: According to a popular legend, sage Asit Muni – who had his hermitage here – bathed daily in both Ganga and Yamuna. When, due to his old age, he could no longer go to Gangotri, a stream of River Ganga appeared opposite Yamunotri for him to bathe. 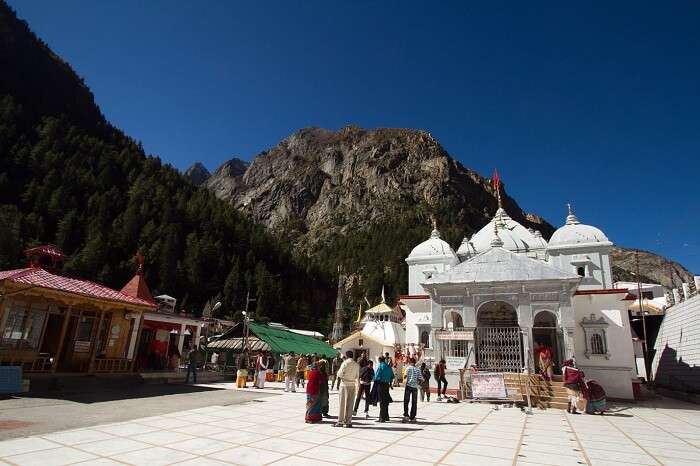 Gangotri – the seat of Goddess Ganga – is frequented by millions of pilgrims each year. The Gangotri Dham is set 19 km from Gaumukh – the place where Ganga River originates. From Gaumukh in the Gangotri Glacier, the river flows as Bhagirathi up to Devprayag. Here, it merges with Alakananda and forms Ganga as we know it.

Legend: According to the Hindu mythology, Goddess Ganga took the form of the river to cleanse the ashes and liberate the souls of King Bhagiratha’s predecessors when Bhagiratha meditated to please the goddess. To minimize the impact of her fall, Lord Shiva placed her in his matted locks. At the point of impact, the goddess came to be known as Bhagirathi.

Another legend talks of Ganga as beautiful woman born out of Lord Brahma’s kamandalu (water vessel). It is said that Lord Brahma washed Lord Vishnu’s feet after the latter killed the demon Bali in his reincarnated form of Vaman. Lord Brahma, thereafter, collected this water in his kamandalu. And Goddess Ganga was born out of it. 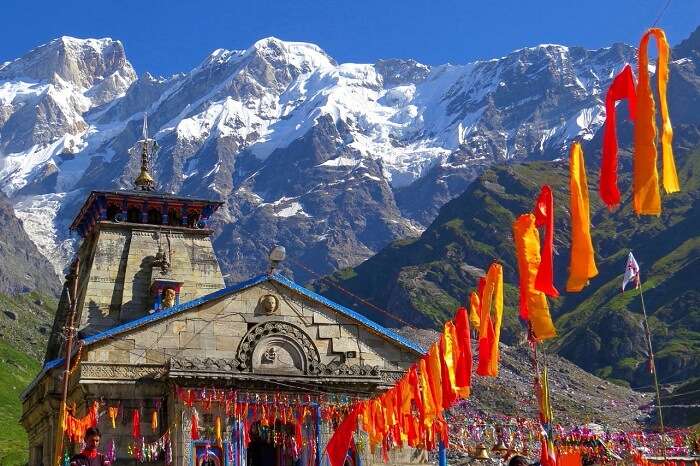 Located near the head of the River Mandakini in the Himalayas, Kedarnath is flanked by breathtaking snow-clad mountains. The city is named after King Kedar who ruled in the Satya Yuga. The saintly king is believed to be the ruler of the 7 continents. His daughter – Vrinda – is believed to be a partial incarnation of the Goddess Laxmi.

Legend: According to a popular legend, Nar & Narayana (two incarnations of Lord Vishnu) prayed in front of a Shivalingam in Badrikashraya of Bharat Khand. Pleased by their devotion, Lord Shiva granted them a boon. The duo requested Shiva to take up a permanent seat as a Jyotirlinga at Kedarnath so as to free the devotees of Lord Shiva from all their miseries. 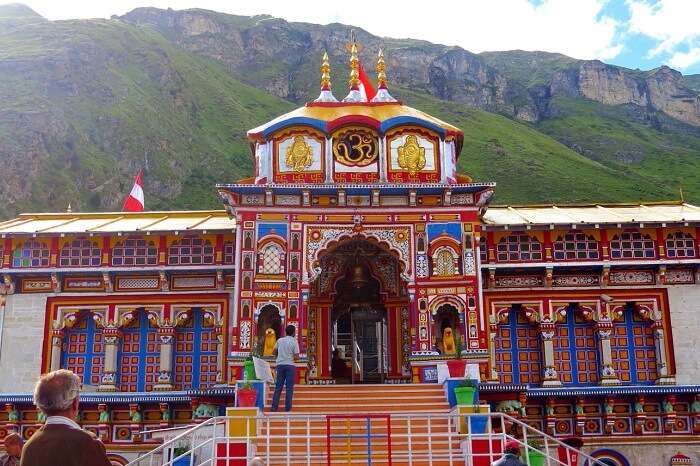 The main deity here is the Lord Vishnu, worshipped in his aspect of Badrinarayan. This Dham is the only one that is a part of both the original Char Dham and the Chhota Char Dham circuits.

Legend: According to the Hindu epic Mahabharata, Badrinath is the place where Nar & Narayana – the dual forms of Lord Vishnu – meditated. The holy town has also been mentioned as a destination that the Pandavas crossed en route heaven. Another popular legend tells that Sage Vyasa authored Mahabharata at a cave in Mana, a destination approximately 4 km from Badrinath.

Why Should You Go For Char Dham Yatra? 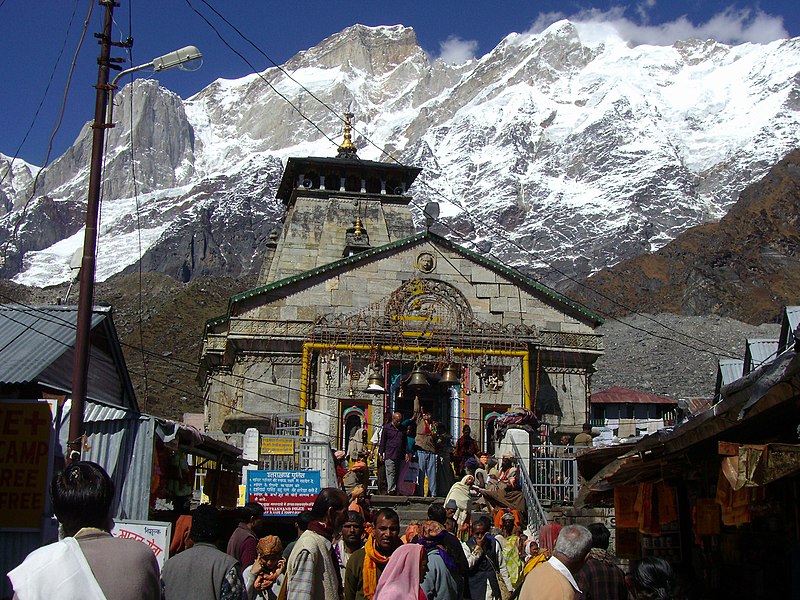 Nestled amongst the peaks of Himalayas in Uttarakhand, Char Dhams are the four holy places of Hindu Pilgrimage. The four sites that together make the Hindu pilgrimage are; Yamunotri, Gangotri, Kedarnath, and Badrinath. Each and every of these 4 locations are sacred in Hindu religion. It is believed that whosoever visits these holy shrines once in their lifetime, achieves salvation or Moksha.

When Should You Go For The Char Dham Yatra? 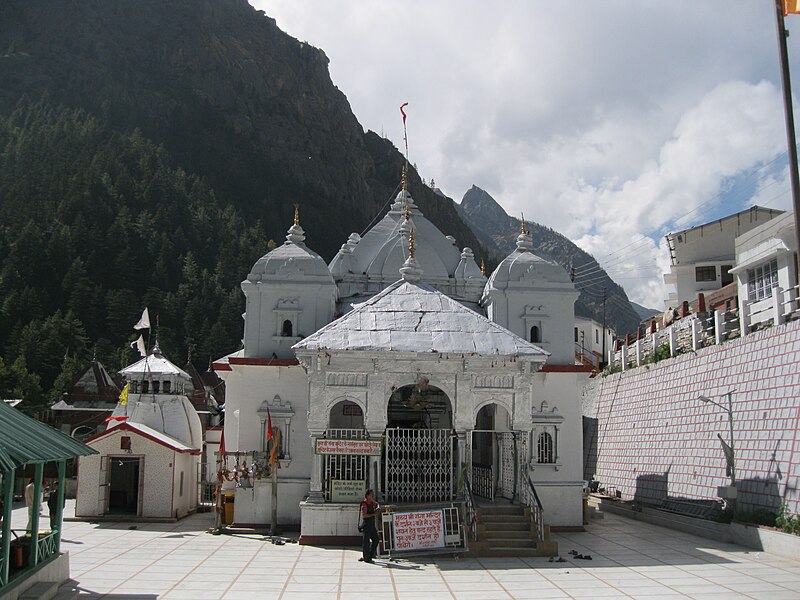 The Char Dham Yatra opens on the day of Akha-Trij or Akha Teej (in May) and closes for winter on Bhai-Bij (2 days after Diwali). However to beat the heavy rush of early May & June and to avoid any route blocking due to heavy rainfall in late July & August, it is best to take the Char Dham Yatra in early July and September.

How Difficult Is The Char Dham Yatra?

Varying climate, poor road conditions, and frequent landslides make this pilgrimage both strenuous and difficult. The temperatures may fall to as low as 1° C at night in Kedarnath and go as high as 40° C after a few hours. So, you will have to carry thick woolens for the extreme cold temperatures as well as light fabrics for the hotter places.

Note: At some of the highest points, the poor oxygen concentration may cause breathing problems.

But regardless of all the difficulties and hardships of the arduous pilgrimage, millions of pilgrims flock in and take up the Char Dham Yatra annually. So, if you have faith in the gods & goddesses and wish to offer prayers to them in their known abodes, it is time to head for a Char Dham Yatra.