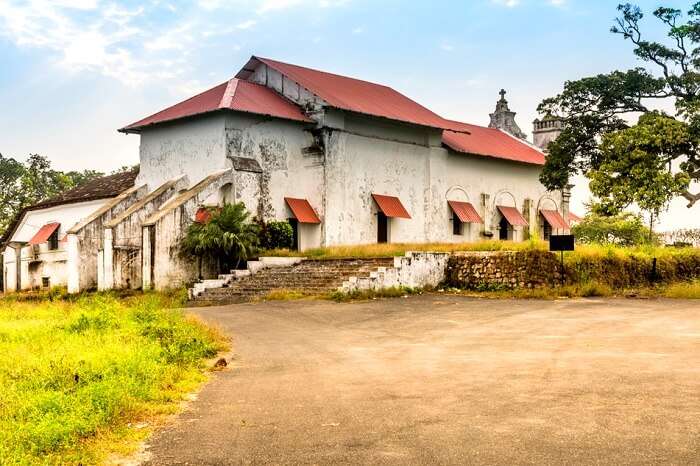 Vasco Da Gama is one of the important cities of Goa and is a major base for Indian Navy as well. This fabulous city is also known as Vasco, which derives its name from the Portuguese pioneer “Vasco Da Gama”. He was a highly successful Portuguese sailor and was the first person to sail from Europe to India. With an epic history of navigation, he was successful in establishing Portugal as a major colonial empire. His first voyage to India was considered as commencement of global multiculturalism, this is one of the important facts about Vasco Da Gama.

Positioned on the peninsular tip of River Zuari, Vasco Da Gama is one of the busiest ports and important trading centers where exports of ores take place. This natural harbor is influenced by the Portuguese architecture accompanied with narrow lanes that run in a parallel manner connecting the entire city.

Dotted with beaches and ancient old buildings, this is a small city which is most explored among the tourists. Discover the explorer in you by having a look at the Mormugao fort to pious St Andrew’s Church.

9 Interesting Facts About The Places In Vasco Da Gama

These are few Vasco Da Gama facts which will help you go deep and understand the heritage of this city.

The Indian Navy’s Goa Naval Area (base) is positioned in Vasco and it operates the Dabolim Airport which in turn makes Vasco Da Gama as a tourism dependent state of Goa. The “Document of surrender” was signed by the Portuguese, in the presence of Vasco’s municipal council. However, Vasco-da-Gama is primarily a shipping center, and plays a vital role in the economy of Goa. This is one of the important facts about vasco da gama.

Must Read: 5 Best Things To Do In Vasco Da Gama For A Soul-Stirring Holiday

Being a port city, Vasco houses one of the prominent ports i.e. Mormugao which is located 4km away from the city centre of Vasco. This port exports vessels of iron ore and minerals to international countries like Japan and Korea. It is it is one of the oldest ports in India and employs around 2,600 employees.

Suggested Read: 9 Best Places To Visit In Vasco Da Gama Which Will Let You Discover The Portuguese Culture!

The eldest son of Chhatrapati Shivaji Maharaj (founder of Maratha Empire) was Sambhaji Bhosale. An effort was made to change the name of Vasco as Sambhaji Nagar which was mentioned in a few records of Government. However, this is considered as a political move altogether. There are no official records which portray that the city was renamed. This is one of the interesting facts about vasco da gama.

Another interesting fact about Vasco Da Gama is related to the sacred Shri Durgamata Shiv Mandir. Elegant with its white shrine and rose colored shikhar, this temple has an epic story behind it. Goddess Durga happened to appear in the dream of a man hailing from Orissa who was searching for his brother in Vasco. So, this temple was constructed in his remembrance.

Nestled in close proximity to Bogmalo Beach, one can enjoy an amazing afternoon in this Naval Aviation museum which provides a deep insight about the Goa’s naval history from Portuguese times. Representing Goa’s liberation and boasting some fantastic vintage aircraft, this museum has many rooms with each room holding its own significance. One room consists of torpedoes and bombs while the other is a safety equipment room which comprises of complete flying gear of a pilot.

Moreover, this is a must see for kids and as there is no restriction for touching the exhibits of the museum. Also, many unique collections of photographs on the liberation of Bangladesh are displayed in the museum. This is one of the important facts about Vasco Da Gama.

You will get to experience a splendid view of the Arabian Sea encompassed with the islands in between the sea. The unique thing about the Garden is that it is free of plastic waste and will get to enjoy the tranquillity along with beautiful surroundings. Come and have a look at the blue water of the Arabian Sea.

Goa is famous for its churches and beaches. One of the awe-inspiring churches of Goa is St. Andrew Church having great architecture, grandeur, decorative staircases and its magnificence. The church is as old as 1570 AD and was then reconstructed in 1594 AD. Tourists love to visit the church owing to its decorative interiors and exteriors.

Bogmalo beach is one of the private beaches in Goa with pristine shores in the city of Vasco Da Gama.

If you are willing to spend a day at leisure then this is your perfect choice. Get to witness the calmness, serenity and enjoy fun filled activities by visiting Bogmalo Beach.

If you have come Goa, you can’t miss on the beaches. Baina Beach in the city of Vasco da Gama and is famous for water sports and Kayaking. Come and experience the white sandy beach along with beautiful waters by planning a visit to Baina beach.

Besides beaches, Vasco Da Gama also boasts holy temples like Shri Ramnath Temple with a legendary story of five deities named Lakshmi Narayan, Lord Ganesh, Shanteri and Betal, Kamakshi, Lord Rama and Kalbhairav. On the other hand, Vasco Da Gama houses plenty of churches which are finely crafted with Portuguese architecture and are most visited places by the tourists. Apart from this, the horror part of Vasco Da Gama is definitely not to be missed. With its horror vibe, the Three Kings Church located near Cansaulim beach has a dreadful story behind it.

How To Reach To Vasco Da Gama

By Air: Vasco Da Gama can be reached by air through Dabolim Airport.

By Sea: You can reach Vasco Da Gama as it is connected by the sea via Mormugao Port.

If you are planning a trip to Goa, then do keep Vasco Da Gama on your bucket-list. The place is one of the oldest towns in Goa and was once used as a port during the reign of Portuguese. Explore the ancient, cultural heritage and facts about Vasco Da Gama. There are several beaches here for relaxing and sunbathing or enjoying a few adventure activities like Jet skiing, banana boat ride etc. A visit to this tropical island is definitely worth your time and money!

Vasco da Gama discovered Goa in 1498. This is why a city is named after him.

What is Vasco da Gama famous for?

Vasco da Gama is famous for its abundant natural beauty. It is also an important port city in India.

How far is Vasco da Gama from Goa?

How far is Vasco da Gama from Madgaon?

The distance between Vasco da Gama and Madgaon is 34 km.

How far is Vasco da Gama from Baga Beach?

Vasco da Gama is 42 km away from Baga Beach.

Is Uber available in Goa?

No, Uber is not available in Goa. However, the government of Goa has launched a cab booking app called Goa Miles.

Experience Flyboarding In Goa For An Adventurous Getaway On Your Next Vacation!

22 Hill Stations Near Goa That Offer Some Of The Most Impeccable Views Of The Landscapes In 2022!