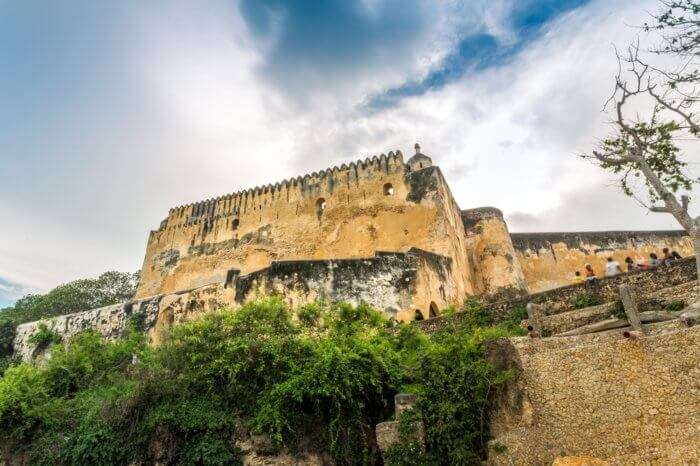 Fort Jesus in Kenya, is a fortress built by the Portuguese during the late 16th century in Old Town of Mombasa. The present-day museum was used as a defensive block and protected the Portuguese of the Eastern Coast of Kenya. The fort served as a barrack for the Portuguese soldiers and later when the British protectorate was proclaimed, it was converted into a prison. This fort now a significant historical landmark in Kenya managed by the National Museums Association of Kenya. The museum is also registered as a UNESCO World Heritage Site.
Fort Jesus Museum is symbolic of the history of the town of Mombasa and one of the most visited tourist attraction site in Kenya. It is one of the best-preserved evidence of outstanding military fortification during the 16th century. The fort is spread across an area of 2.36 hectares and includes a moat and the surrounding areas.

If you are wondering Fort Jesus was built in which century? It was built during the latter part of the 16th century, (1539 – 1596) by Portuguese soldiers. The town of Mombasa used to be the trade center and gateway to India at that time, thus the fort was built to protect the town from any outside influences. The fort in the present day is one of the most visited places in Kenya.

The fort stands on the coastline of Mombasa and speaks of the historical times when the Portuguese used to rule the trading routes of the Indian Ocean. The location of the fortress was such that, it enabled the soldiers to see any ships that approached the harbor. The fort also tells the story of a quite gruesome past, when the slaves under the Portuguese rules were tortured and perished from hunger as well as diseases. During those times, the slaves were shipped to the Persian Gulf and Arabia through the port of Mombasa.

The 16th century was the time when cultural, commercial and political forces were budding and the Portuguese deigned it important to build a fort in the region. Fort Jesus was following Italian architecture styles and you can see significant Renaissance styled architecture in the fort.

Once the Portuguese started establishing themselves in the Fort, it became a subject of battles. The fort was captured and recaptured many times, changing hands between many rulers including the Omani Arabs from 1698 to 1895, which then went under British control and was then transformed into a prison. The slaves of the country were held in the torture rooms and cells in the Fort’s prison. The castle also had cannons built to protect it from invaders. Once again when the Portuguese recaptured the fort, it was refurbished many times.

In 1858 the area became a national park and later in 2011, the fort was registered as a UNESCO World Heritage Site and is marked as one of the prolific structures belonging to the 16th century.

Must Read: The Ultimate Honeymoon In Kenya Guide You Need

Fort Jesus symbolizes the prolific architectural expertise of the Portuguese and this colonial-era fortress is a stunning example of the Renaissance military architecture. The fortress when viewed from the top, resembles the shape of a human, with the head portion pointing towards the Ocean. The fort is an interesting fusion of colonial and indigenous architecture styles. The Renaissance military architecture is showcased beautifully with the fort built of local techniques using local coral and limestones.

The fort was designed by an Italian architect Giovanni Battista Cairati. During the 300 years of its formation, the fort has changed hands multiple times and you can see the Arabian and British influences on the fort architecture as well.

The original walls of the fortress were designed such that it could withstand cannon ball attacks and were 5o feet high. Later when the Omanis conquered the fort the height of the wall was lengthened by another 9 feet, which not only kept the invaders out but also the people inside the fort.

In the present, the fort is a blend of African, European and Middle-Eastern construction styles. The fort ramparts offer a beautiful panoramic view of the town port and the rooms of the fort are now home to a museum that speaks of the history of the fort and the town of Mombasa.

Fort Jesus is now open as a museum and the people can visit the museum to explore the little island and get to see some of the historical structures in Mombasa, including Oman House, which used to be the residence of the Sultan, governor of the East African coast. Inside Fort Jesus, you can see an exhibit of artifacts discovered from the excavations of Fort Jesus, Manda, Gede ruins and Ungwana. Other important places you must explore are,

Suggested Read: 10 Best Things To Do In Kenya For An Exciting Holiday & Exploring The Country Better!

Fort Jesus was named as a UNESCO World Heritage Site for multiple reasons. The fort was built during a period when cultural, political and commercial globalization was budding. The imposing structure of the monument with traces of multiple modifications, showcasing interchange of many cultural values. The fort has also served as a major control point of trade through the Indian Ocean Basin.

The fort is a great example of a unique type of fortification as a result of military innovations between the 15th and 16th century. The layout and form of this structure are ideal reflections of the Renaissance architecture with geometric harmony. The fort though underwent multiple refurbishments has been able to maintain its original layout.

Suggested Read: 10 Best Things To Do In Kenya For An Exciting Holiday & Exploring The Country Better!

Since the museum is one of the most visited places in Kenya and is very popular among the tourists, it is open from 8 am in the morning until 6 pm in the evening. You have to pay a certain fee to visit the museum. Fort Jesus Entry Fee is 1200 KES for non- resident adults, 600 KES for a non-resident child, 400 for East African adults, 200 for East African Children, 200 for Kenya citizen adults and 100 for Kenya citizen children.

Suggested Read: Shopping In Kenya: A Little Guide On What All To Buy From The Best Markets & Malls

How To Reach Fort Jesus Museum?

The best way to reach the Fort Jesus Museum in Africa is by bus route. There are many bus routes that will lead you to the fort. There are three significant bust stations, from where you can board a bus that will take you directly to the Fort Jesus. Board a bus from Market Bus Stop or Kanisani Bus Stop to reach the museum. You can also reach the fort by train. Board a train from Nairobi train station to Mombasa and from there you can easily reach the museum using any public transport.

Further Read: Wildlife In Kenya: Spot The Glorious Fauna In The Exotic Land That Has Got It All!

10 Exotic Kenyan Cuisines That Will Let You Blend With The Country’s Culture!

20 Places To Visit In Kenya That Reflect The Country’s Essence Beyond Wildlife!

Kilimanjaro Trek: A Guide To Conquer The “Roof Of Africa”