8 Greek Temples That Are An Epitome Of Architectural Brilliance

The Greek civilization has always been renowned for its history, heritage and culture that places great importance on the Greek gods. The Greek temples date back to as early as the 6th century BC and their design and architecture convey countless tales from the past. Many of the famous Greek temples have been recognized as world heritage sites today.

Top 8 Greek Temples That Are A Must-Visit

Let us take you through some of the ancient Greek temple facts that make them irresistible when it comes to touring Europe. 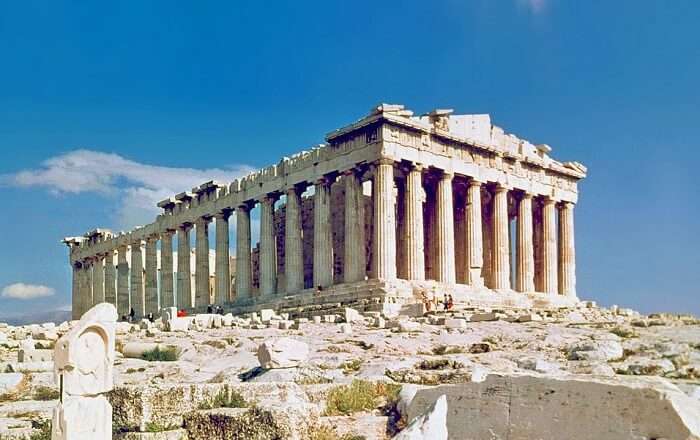 A temple dedicated to the city’s patron goddess – Athena Parthenos, the Parthenon grandly stands as testimony to the power and glory of ancient Greece. Declared as a UNESCO World Heritage site today, the Parthenon is renowned as the largest Doric Greek temple built during the age of Pericles ( 447-432 BCE). This Greek temple originally housed a magnificent statue of Goddess Athena carved out of ivory and gold, which was later stolen by the Persians.

10 Places To Visit In Mykonos In 2022 For An Ideal Vacation In The Pretty Greek Island!

2. The Valley Of Temples 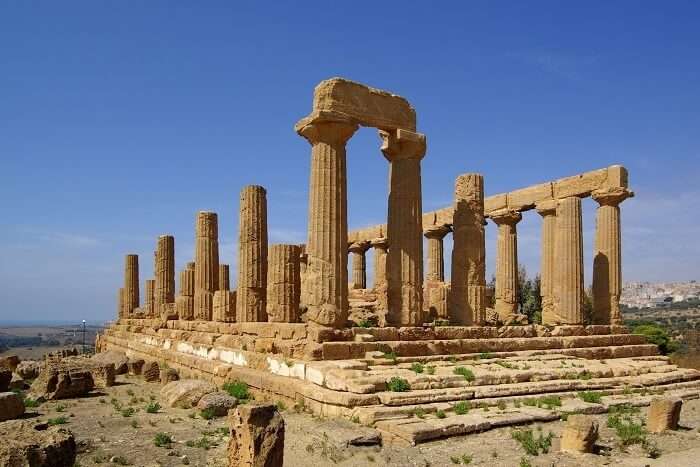 Located in the beautiful Sicily, the UNESCO World Heritage site of Valley of Temples is one of the most fascinating of all Greek temples in Italy. It holds the remains of 7 ancient Greek God temples showcasing different styles of Greek Temple architecture, the grandest of them being the Temple of Concordia. Originally built in the fifth century, the Concordia temple remains one of the best temples that portrays the Doric architecture till date. 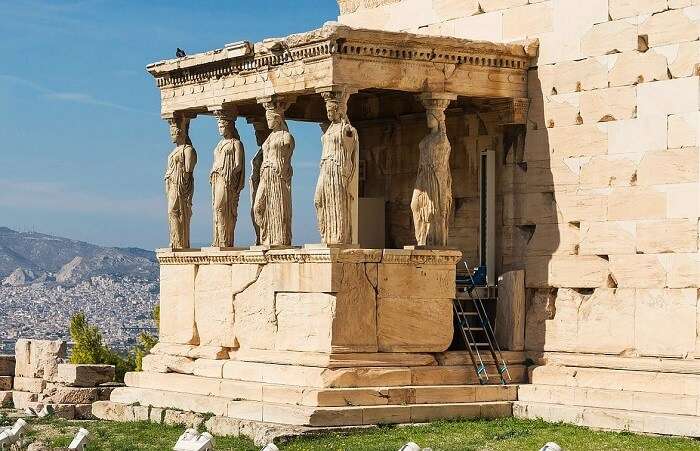 Erechtheum is one of the iconic Greek temples in Athens with a distinctive design from Pentelic marble, including the ‘Porch of the Caryatids’ or the ‘Porch of Maidens’. It is a large porch with six ornately designed columns in the form of maidens. This complex design is believed to be developed during 421-407 BC, which is known to be the Golden era of Athens City. 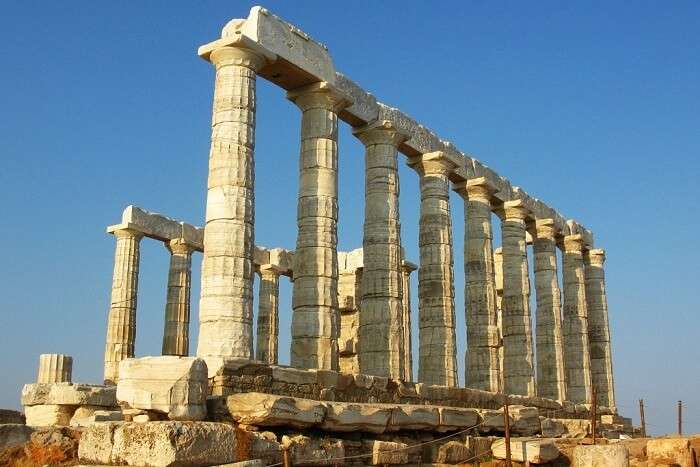 Artistically built on the tip of the Attica peninsula and surrounded by sea, the Greek temple of Poseidon is a magnificent ode to Poseidon, the water God. Built around 440 BC during the age of Pericles, this Greek Temple is of the Doric style that boasted of 34 grand Doric style white marble columns, out which only 15 still stand. A view of this temple basking in the glory of the sunset is worth an hour’s drive if you happen to be in Athens at the time. 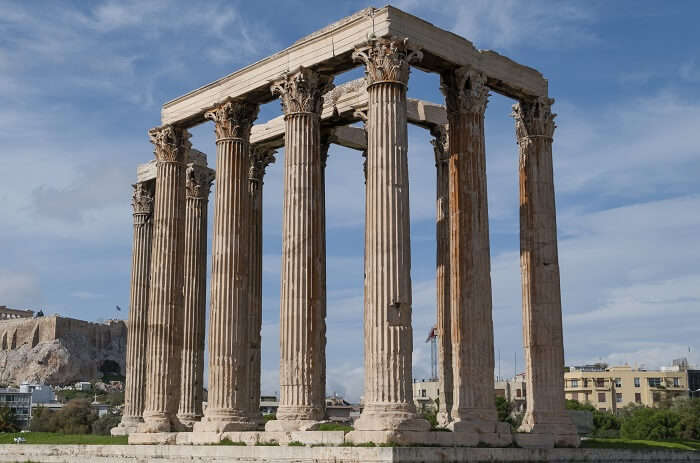 At the center of the Greek capital, Athens, stands the remains of the largest temple in Greece, dedicated to the king of Olympian gods – Zeus. Partially constructed with plans to incorporate Doric style columns and limestone in the architecture in 6th Century BC, this Greek Temple was completed 336 years later by King Antiochus IV Epiphanes following revised plans with Corinthian style of architecture and Pentelic marble. With 104 majestic columns, a magnificent chryselephantine statue of Zeus along with many other statues of Greek gods and roman emperors, the temple was completed in the 2nd century AD. Walking past the remaining 15 of the original 104 Corinthian columns standing today, one reminisces its erstwhile glory.

12 Best Resorts In Greece That Make You Feel Like Royalty 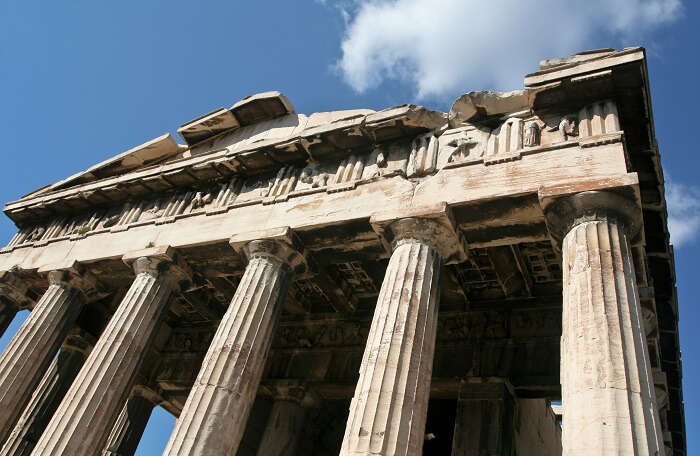 Dedicated to the God of Craftsmanship, the Temple of Hephaestus is one of the famous temples in Athens. A living manifestation of brilliant architecture, the architect Ictinus has showcased great work just like he did while designing for Pathenon. Located 500m north of the famous Acropolis, this temple made of Pentelic and Parian marble is one of the best preserved Greek temples in the world. 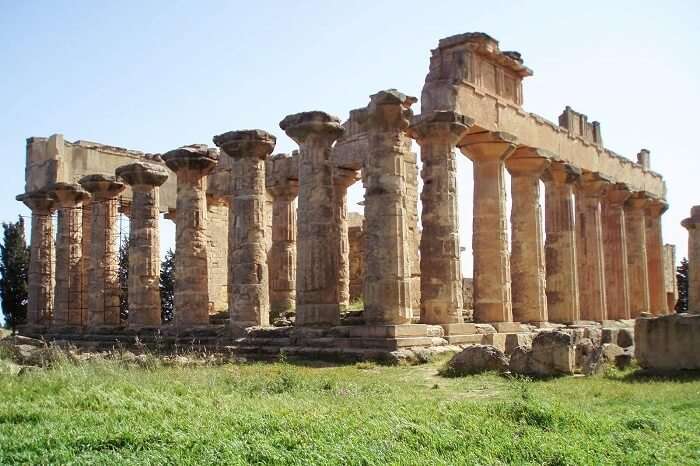 Originally built in the 6th century, and reconstructed by the Romans in the 2nd century AD, the Temple of Zeus in the city of Cyrene is yet another enchanting Greek temple of the world. Originally built in the Doric style of architecture with 2 rows of Doric columns, the temple stonework also shows evidence of Egyptian craftsmanship and traditional Roman style as well. 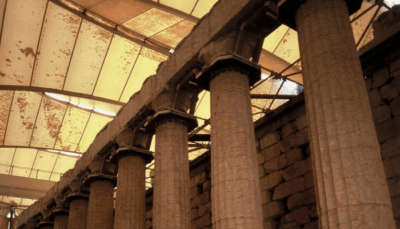 Built between 420-400 BC by Iktinos, the Temple of Apollo Epicurius is located at a distance of 80 km away from Olympia and 7 km away from Figalia, in the rugged region of Bassai. If you choose to visit the Temple of Apollo, the local tours last for 90 minutes, so ensure you take some time and also take a trip to the nearby seaside town of Katakolon.

It is evident from the skilled architecture and designs that the Greek Civilization was forever dedicated to their culture, religion and gods. While these Greek temples are a must visit by each traveller, do not miss out on these iconic temples on your next
trip to Greece for an incredible experience.

Which are the best Greek temples?

Some of the best Greek temples are The Parthenon, The Valley Of Temples, Erechtheum, Temple of Poseidon, Temple of Olympian Zeus, Temple of Hephaestus, Temple of Zeus, and Temple of Apollo Epicurius.

What are the three orders of Greek architecture?

The three distinct orders are the Doric, the Ionic, and the Corinthian.

Which one is the most famous temple in Greece?

While there are countless temples that are unique and popular across the world, one of the most renowned temples is the Parthenon at Athens.

What is the oldest Greek temple?

Temple of Hera, Olympia is touted as the oldest Greek temple.