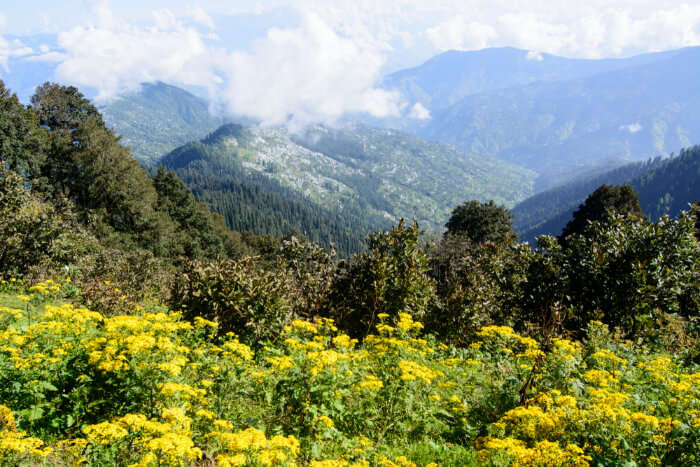 About 70 km from Shimla is a place lesser known, more serene, and almost as good as a paradise, the Hatu Peak. Enveloped in towering mountains, dotted with sweeping landscapes, and decorated with fir, maple, and cedar, it amazes nature lovers with stunning nature views. Standing tall at 12000 ft above sea level, it is the highest peak in the Shimla/Narkanda region that sees pleasant weather throughout the year.

Just walk through the lush green alpine and enthrall yourself with spectacular nature views around!

With wonderful orchard and spectacular nature views around, the 7 km stretch to Hatu Peak is an easy trekking trail. Be it a family vacation or a weekend getaway with friends, it can be considered among top places to visit near Shimla. Kacheri, Narkanda town, apple orchards, and snow-covered peaks around make the place a top attraction in the area.

The peak can be accessed by a bike or a car or on foot. At the top of the peak, the verdant views of the mountains around and Hatu Mata temple grace the travelers with their majestic presence. Overall the 7-k-long stretch from Narkanda to Hatu Peak takes close to 3 hours to trek.

Hatu Peak weather remains cool and friendly for the most part of the year. With the onset of winter, conditions become cold, therefore, you must carry adequate winter clothes to stay warm during your visit to the place. April – October is considered as the best time to plan a visit to Hatu. During summer, Hatu Peak temperature stays between 8-20 degrees while in winters the temperature falls as low as -10 degrees.

How to reach Hatu Peak

By air: Jubbarhatti Airport, 23 km south of Shimla, is the nearest airstrip to the city. The remaining distance can be covered by road.

By rail: Shimla station is the nearest railhead which is well-connected with other major cities across the country. You can also ride on the famous Shimla – Kalka toy train from Shimla.

Must Read: Top 25 Hill Stations Near Shimla That Are Perfect For A Himalayan Getaway!

Categorised as an easy trek, Hatu Peak Trek is mostly taken at the beginning of summer. The trek is a walk to remember in the alpine of Himalayas through steep curves, muddy paths, and hairpin bends. Stunning mountain views and snow-covered trail (only in winters) make the trek even more engrossing.

Hatu Peak Trek can be easily covered in a day’s time. It takes approximately 7 hours to cover 14 km (to & fro). Narkanda acts as the base camp for the trek.

The starting point of the trek. Easy as it is, the path unlocks verdant views and mesmerizing landscapes! A snow-covered path leading to the top of the Hatu Peak! The views are absolutely breathtaking.

Suggested Read: 29 Most Amazing Things To Do In Shimla

Sitting atop the peak, the Hatu Mata Temple is a made up of wood and is one of the most popular religious places in the area. The 360-degree views of the surrounding from the temple are truly breathtaking.

A wonderful natural attraction near Hatu Peak, the Tanni Jubbar Lake is encircled by trees from all sides. The oval shaped lake is a must-visit when you are in the Narkanda region.

The temple dedicated to goddess Kali is the perfect place for you to meditate and worship. The temple is located 7 km from Narkanda offers amazing views of the surroundings.

The apple farm near Narkanda is known for its wonderful apple orchard. Take a momentous walk across the farm and adore the beauty of nature.

You can book a stay in one of the many hotels in Narkanda that offer accommodation in every price range. However, travelers also prefer to do camping near Hatu Peak and experience the charm of nature.

3 km behind the peak, there is a campsite. Camping there is suggested because it saves you from the biting cold breeze that awaits you at the peak. Also, you can carry your own tent and pitch it close to the temple. There is a garden near a government’s building at the top of the peak that allows you to make your own camp. Renting a camp would cost you around INR 500.

Suggested Read: 30 Places To Visit In India In April 2022: Beat The Heat This Summer Like A Pro!

Further Read: 5 Types Of Offbeat Stays In Himachal You’ve Been Missing All This While

There still are some of the most exciting places to visit in Shimla you might not have heard of! It’s time that you get into the explorer mode and book a Himachal tour package now!

What are the modes to reach Hatu Peak from Narkanda?

You can reach Hatu Peak from Narkanda by a bike, a car or simply trek all the way to the peak.

What are some great hill stations for weekend getaways from Delhi?

What are some places where I can go trekking in Himachal?