Haunted Places In Portugal: 10 Places That Will Send Shivers Down Your Spine 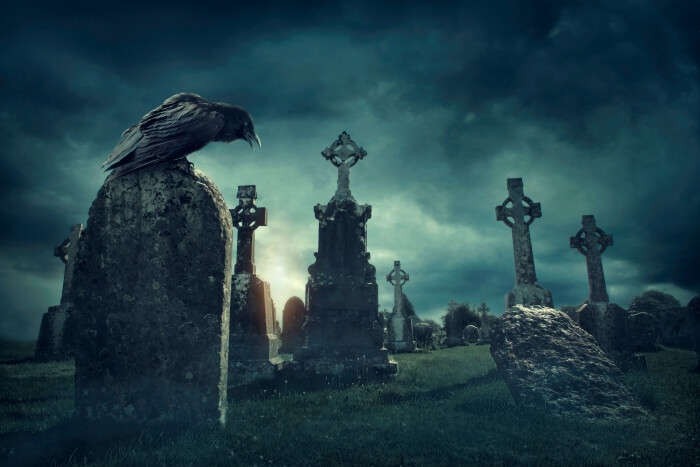 Football, wine, coffee and the beaches – this is what Portugal is all about. Thousands of travellers from around the world visit this amazing country for all the good and fun reasons. While it is known for its sun and sand, the country has its own share of mystery and horror too. We take you to the haunted places in Portugal, which are steeped in history and will send a shiver down your spine.

10 Most Haunted Places Of Portugal

Beware, as we step foot into the scariest and the deadliest of the places in Portugal. After reading about this, you might just stay awake the whole night. Read at your own risk!

Águeda is usually known for its bright blue skies and the acres of vineyards. What you might not know is that it is also home to one of the most haunted houses in Portugal. Quinta da Pauliceia looks like one of those haunted houses right out of the movies – a non-decrepit structure surrounded by barbed iron fence – it gives you the creeps just by looking at it. This house belonged to the Águedense, a Brazilians family and was named after the city of São Paulo. All the members of family died in the influenza pandemic in 1918, with only one member of the family surviving, who also eventually died, leaving no heir behind. What makes this house one of the scariest is from the accounts of the neighbours. While some have heard of shotgun blasts or the neighing from the stables in the property, some have even experienced their head being gently touched by something invisible. Spooky…isn’t it?

Must Read: 13 Terrific Things To Do In Portugal To Soak In The Rich Portuguese Flavor

This is one of abandoned places in Portugal and it sure does send a chill down your spine. This was built in 1910 as a sanatorium. It was during the time when there was a tuberculosis epidemic, spreading across the country. What was meant to hold 50 patients, ended up housing 500 of them. At that point of time, there was no cure for this illness and all 500 of them died of the disease. Later on, antibiotics were found for the same and the disease was completely eradicated. With that, the medical facility closed down in 1961. But, it is said that the souls of those 500 patients hover around the place, and that is what makes it scary. Though haunted, the place plays host to paintball matches. Imagine what would that be like!

Well…this story can be easily made in to a film. This is by far, one of the most haunted places in Portugal. The story goes that this farmhouse belonged to the Baron of Lages. He suspected his wife of cheating on him and what happened next was unthinkable. He tied her to the back of a horse and dragged her around the estate, until she died. Soon after, he realized that she was actually innocent. Ridden by guilt, he killed his children before killing himself. Since then, people say that they have spotted the ghosts of the couple around the property. Eerie.

This house belonged to the 20th century poet, naturalist and romantic John Pike. Strange things started happening soon after, more of a tragedy. It is believed that his old mother, dropped his son (her grandson) from a window in the house and the young child died. He then left the house, as he could not bear to stay in that house anymore. It is said, that at night times, people have heard sounds of something being dragged across the house and the voice of a baby crying.

This is actually a park in northern Lisbon. There is an old, dilapidated mansion there too, one of the abandoned places in Lisbon. The locals say that this entire land was the property of a wealthy businessman, Francisco Mantero Belard in the early 1900s. People are said to have heard wailing sounds from, what seems to be, one of the abandoned places in Lisbon. Story goes that these wailing sounds belong to a woman, who was a slave and was tortured by the wealthy businessman. It is believed that she was kept in a small cage and tortured for many years.

Suggested Read: 5 Best Villas In Portugal That Will Add Stars To Your Holiday Experience

If you are wondering what is a gorgeous five-star hotel doing in this list of the most haunted places in Portugal. Let us tell you, looks can be deceptive, and this one surely is. Perched atop the cliffs of Praia da Rocha, the villa-converted-hotel and spa, was built by the Magalhães Barros family in the early 1900s. The elder daughter died in this same villa and was later given to Henry Bivar de Vasconcelos, a cousin, who converted this villa into a hotel in the 1930s. the cries of footsteps of the daughter can be heard in the hallways of this 5-star hotel. There have been accounts of that.

Suggested Read: A Guide To Help You Plan Your Portugal Honeymoon

7. The Small Castle of São João

The castle by the ocean in Estoril, has an interesting story to tell. There lived a little blind girl, next to this castle. One day, while wondering about, she seemed to have fallen to her death from the cliff. From that day on, strange things have been witnessed by the locals. They say that have seen a small girl near the cliffs while some have even got an unexpected feeling to jump off the cliff. Some others have also see the little girl with a doll in her hand, strolling across the castle and the surrounding areas. If this does not give you the creeps, we don’t know what will!

One of the abandoned places in Portugal, there are a couple of stories doing the rounds, explaining why this house is haunted. The first one is that a father and a daughter lived in this house and the father was quite over-protective father. He found out that his daughter was in love with someone and out of anger, he locked up his daughter and her lover in a pit and they were left to die. The lovelorn couple is said to have haunted the property since then.

Yet another story, though, as not as convincing as the first one, is that the father went bankrupt and to prevent the bank from taking the home that he lovingly built, killed himself, therefore ensuring that they could not take away the property from him.
Either way, the word on the street is that this house is definitely haunted.

Suggested Read: These Exciting Places To Visit In Portugal In Winter Will Make Your Trip A Memorable One

9. The Cemetery of Pleasures

This yet another place in the capital, might not be haunted in the true sense, but yet, gives you the creeps. Built in the 19th century, right after a cholera outbreak, this final resting place of thousands of people will give you the jitters. The tombs, which are mostly above the ground, and are in the shape of houses, literally. The tombs have windows, through which you might even be fortunate, or in this case, unfortunate, to get a glimpse of the decayed bodies. The large area of this cemetery also adds to the eeriness of the place.

This one probably has the best story among all the places – one filled with deceit and fate. The place was built by a Spanish Count, Don Rodrigo, in the hope that the natural healing factor in the water here might cure his daughter of a threatening skin disease. Word spread far and wide and the place was converted into a spa, where thousands of people would visit to heal their skin as well. What they were unaware of was that the waters actually had radioactive properties, owing to a uranium mine a few miles away. It was discovered a few decades later and the spa was closed down, but many people died, for obvious reasons. It is said that this place is haunted by that very many people.

With so many stories to tell – some tragic and some just pure creepy – the haunted places in Portugal is not one which is high up on the itinerary of a traveller. But, if you are up for some adventure and if you are daring enough, visit these places on your next trip to Portugal.