9 Liverpool Beaches That Will Assure You Of A Refreshing Vacation 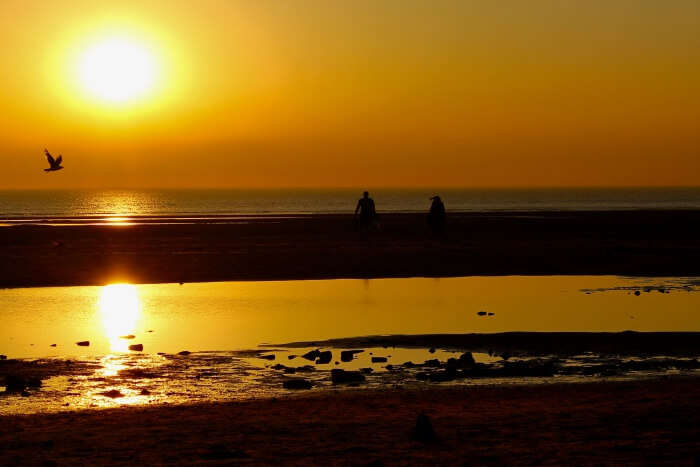 When the sun shines and the temperatures rises, there is only one place you want to be at – the beach. Rain or sunshine, you will always have lots of fun throughout Liverpool and beyond in most seaside towns. Treat your children with ice-creams, build sandcastles, or walk through the white sands. And many beaches are perfect for a family trip to the sea.

Liverpool has some fantastic Merseyside beaches. If you visit Liverpool beaches, you cannot feel glum about the wet weather because it provides perhaps the most amazing views with spectacular clouds and sunrises.

There’s nothing like walking along a sandy beach overlooking the sky full of amazing colors and rumbling waves. With summer around the corner and warm temperatures, we have whipped up the best beaches in Liverpool that you must make a visit to during summer vacation.

Image Source
The beach, which has some intriguing concrete ocean defences, is mainly shingle at high tide, yet when the tide is out, a huge swathe of soft sand is revealed. Anyone who waits far out on the sandbanks must keep a close eye on the tides because they can come here very swiftly.

This beach is very prominent with bathers during the warmer months. The beach is manned by RNLI lifeguards during peak periods. Horse riding and sand buggery are also prominent here.

Must Read: 10 Best Restaurants In Liverpool For A Delightful Holiday

Image Source
This huge open region of the seaside is situated just north of Crosby, one of the most well-to-do locations in Merseyside county. Blundell sands beach is partially backed by a pier and then on the north by dunes.

What is certainly best regarded about Blundell sands are the life-size cast iron figurines of many blokes just outside the tide line. This is Antony Gormley’s permanent art exhibition, Another Place. There is no disputing the authority of these figures as they are partially submerged by the tide, especially with setting of the sun.

Image Source
New Brighton Beach provides an appealing 3/4 miles stretch of golden sand in the north – western corner of the Wirral peninsula. It’s a popular tourist destination for day trips during the summer months. From the beach you have a wonderful view over the city skyline of Liverpool. The beach is a nice place to see ships drifting to the Irish Sea from the Mersey Estuary.

Beyond the marine lake, the Perch Rock Fort, once part of the maritime defence system, is listed in Grade II of the 19th century. The Aviation and Archeology Museum is now home to a number of intriguing artefacts, along with a section on ” Luftwaffe over Merseyside. ” Far yonder the fort is the scenic lighthouse of Perch Rock.

Suggested Read: An Insider’s Guide On 10 Incredible Things To Do In Liverpool

Image Source
Formby beach is a large stretch of shoreline with gently sloping dunes that give it a much more exurban feeling than its neighbours. In addition to the dunes, the inland pinewoods house the red squirrels. Given its position between Liverpool and Southport Formby Beach, it is strange that it retains a large part of its wildlife.

One can only hope this will continue for many years, as the National Trust now owns this section of the coast.

Image Source
If you are looking for beaches around Liverpool, then this is it! West Kirby is a safe and readily available sandy beach on the Wirral Peninsula on the Dee River Mouth. It provides great views over the Dee Estuary and North Wales hills. The beach itself is remarkably tiny at 300 meters in length.

Next to the beach is West Kirby Marine Lake, a sizeable shallow water area set up to enjoy water sports in a secure and protected environment. The Lake has the Wirral Sailing School, which provides sailing, windsurfing and canoeing courses.

Suggested Read: Shopping In Liverpool: 10 Best Places To Shop Your Heart Out!

Image Source
Ainsdale Beach is located between Southport and Formby and is a part of this lengthy, broad sandy stretch. Generally considered the best beach in the region, Ainsdale is the only beach in the north – western part of England that has ever received a Blue Flag.

Today, the beach has received a quality coastal award that guarantees clean water and plenty of amenities. Ainsdale Beach is an oasis for intense kite activity. The beach has areas for kite buggy and land board use while kitesurfing on the sea.

Image Source
Although most people would claim that the glory days of Southport was in the Victorian era, this conventional resort is still one of the most successful in the United Kingdom. Much of this was due to the multitude of annual events that take place here in large crowds.

However, the large swath of sandy beaches in the city is still the reason why people come back and life here hinges around the sea. In summertime, the beach is a perfect place for all traditional British seaside adventures. Creating sand castles, flying kites or dipping in the safe waters are all popular.

Suggested Read: Nightlife In Liverpool: 10 Best Places To Release The Party Animal Within!

Image Source
Meols is located on the Wirral peninsula just off the A553, between Hoylake and Wallasey. This is one of those Liverpool beaches, that at low tide, become a large area of soft sand and floodplains. Sandbuggy and horse riding are mainstream here and it can be a decent venue to watch birds in the winter months.

From the shore, you can enjoy views of Liverpool Bay and the beach has some nice sunsets. The North Wirral Coastal Park is 4 miles long and runs from Meols Dove Point to the New Brighton King’s Parade.

Suggested Read: 10 Indian Restaurants In Liverpool You Must Dine At On Your UK Trip

Image Source
A corner of the nice town that imitates the cataclysm, even on a decent day, Garston Shore is riddled with the stinking, rolling hulks of warships that look like they were lambasted from a remote nuclear mayhem across the horizon.

They are now forgotten and crumbling, streaked white with muddy smears. Come here if you dare!

Liverpool is known for its maritime heritage. If you want a day of relaxation combined with picturesque spots, then plan a trip to Liverpool. When exploring, try to keep this list of Liverpool beaches handy to make the most of your vacation.

10 Castles In United Kingdom Which Reflect The Charismatic Heritage Of The Country!

Day Trips From Edinburgh Remain Incomplete Without Visiting These 12 Places