Mai Po Nature Reserve: A Guide That Lets You Go On A Perfect Date With Nature In Hong Kong! 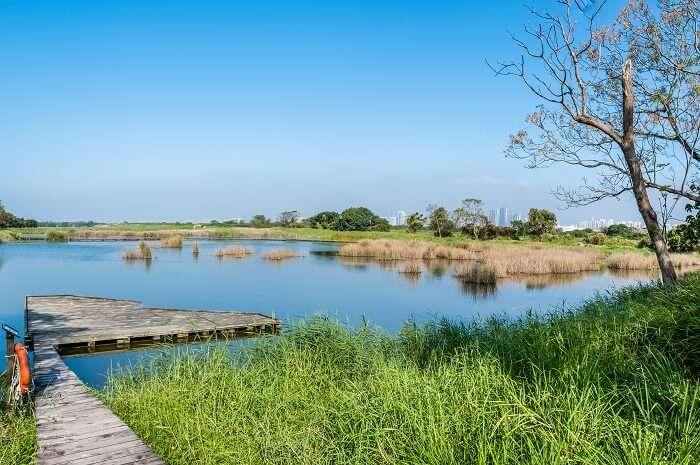 The Mai Po Nature Reserve is a 270 hectare protected nature reserve in the territory of Hong Kong in China. Though it’s a bit out of the way for those visiting Hong Kong, the diversity seen here makes it a much visit place, especially for bird watchers. The diversity of birds in the area is just astounding, around 72% of all the bird species found in Hong Kong can be seen in Mai Po. Even some of the most endangered species like Black-Faced spoonbills are found here.

After just 3 years of being established in the then British territory of Hong Kong, the WWF in 1984 took up the charge for the conservation of the natural resources in Mai Po. To raise funds, the WWF took many steps like organizing school tours, the first ever big bird race and numerous such events that interested people. In 1988, the WWF started their ambitious project for the establishment of marine parks all across the territory of Hong Kong.

In 1992 the WWF organized the first walk for nature, the then Discover Mai Po to raise funds as well as awareness for the conservation of these precious resources. It’s been over 30 years since the WWF took over and the things on the ground in Mai Po have changed completely. From any nature reserve that needed conservation, it has been converted into one of the world’s most popular and well-preserved nature and biodiversity reserves.

This is a restricted area which comes under the WWF, you have to take prior permissions before entering the reserve.

Check-in 3-4 days prior to the visit

On the day of the visit please bring your passport and WWF membership as it is only legal for members of WWF to enter the reserve.

Must Read: Lan Kwai Fong In Hong Kong: Things To Know Before Getting There

Things To Do At Mai Po Nature Reserve

The area of Gei Wei is easily accessible with a paved path that crisscrosses with the shrimp ponds. It’s even suitable for those with mobility issues. There is wildlife all along the pathway surrounding the scopes and you can easily spot the wildlife if you are careful enough to spot them. There are mainly 7 hideouts for birds that are accessible even for those on wheelchairs. It just feels a bit awkward sometimes to see the skyline of Shenzhen so near in the backdrop of the reserve.

If you continue on the paved path, you’ll go further deep into the reserve and see the natural mangrove vegetation of the area. After sustained efforts of conservation, these mangroves have finally become an area with an abundance of biodiversity and ecology around them.

If you walk even further on to floating wooden planks and boardwalks deep inside the nature reserve, you’ll find the muddy flatlands of the deep bay. When you arrive in the muddy flatlands, especially if you come during autumn or winter, you’ll be stunned by the view of hundreds of thousands of birds flocked in the waste wetlands of one of the most urbanized regions in the world.

There are over 250 species of plants both aquatic and terrestrial in the Mai Po nature reserve. Such an abundance of flora allows for the flourishing of ecosystem which further creates conditions for biodiversity in the area to bloom. The flora in the Mai Po and the greater Hong Kong region is the reason for such abundance of different species of animals in Mai Po.

The best time to visit the Mai Po Nature Reserve is the seasons of autumn and spring where more than 300 species of birds grace the area and are a subject of great interest for nature lovers.

Spring in Hong Kong is from Late February to end of March and autumn lasts from late October to the time around Christmas. The reserve is open all year round; you just need to take permits.

Suggested Read: 12 Things To Do In Kowloon That Will Show You A Side Of Hong Kong You’ve Never Seen Before

Already packed up? Head to the Mai Po Nature Reserve by choosing the most suitable option among the enlisted ones. Don’t forget to book your tickets on time.

The Mai Po Nature Reserve is just about 50 km away from the Hong Kong International airport, this makes it really accessible as HKI is one of the biggest air transport hubs in the world. A taxi ride from Hong Kong airport to Mai Po will take from between 50 to 55 minutes.

The nature reserve is accessible via the MTR network of Hong Kong. Just get down at Sheung Shui station and exit from gate C. Take bus 76k from there to Mai Po station and then walk about 20 minutes to the entrance of the park.

The nature reserve is just 6 km from Shenzhen, a mere 60 km from Macau and about 1200 km from Shanghai if you want to come by road from these major cities.

Further Read: 10 Best Things To Do In Tai Po That’ll Make Your Holiday In Hong Kong One Of Its Kind!

There are not many things you can do at the Mai Po nature reserve except birdwatching and hiking. But if you come during the time of the season only these two things will consume all your time and believe it or not it’ll one of the best times you would have ever spent in the presence of mother nature on your next trip to Hong Kong.

A Guide To The Banff National Park: An Adventurous Getaway To The Canadian Rockies!