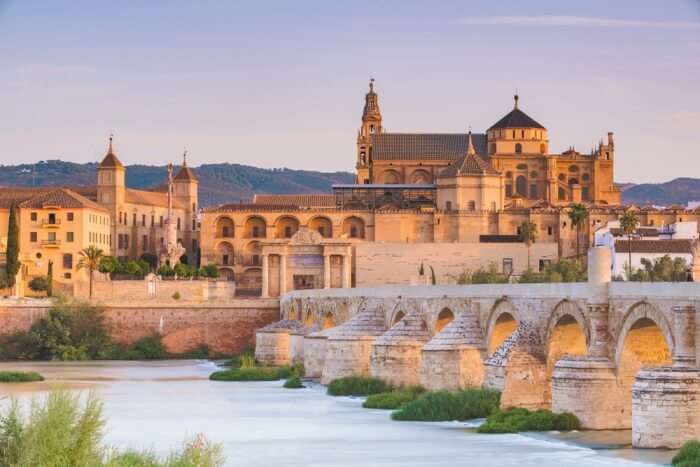 Let’s admit it, we all have planned a trip to Spain with pals at some point after watching Zindagi Na Milegi Dobara. And we should because Spain is a beautiful country with a rich culture and some really interesting history. What most people don’t know is that the Muslim Moors ruled Spain for much of the medieval period and have left for us some really beautiful Spanish mosques. Although many of those mosques were demolished and turned into churches, some of them managed to survive the Spanish attempt to delete the Muslim rule in Spain from the pages of history.

10 Spectacular Mosques Of Spain One Must Visit

While enjoying your vacation in Spain, take out some time to witness the magnificent beauty of the these list of mosques in Spain and Spain mosques and relive their architectural heritage.

1. The great mosque of Cordoba

The Cordoba mosque is one of most visited Spanish mosques and comes under UNESCO world heritage site and is absolutely worth seeing. You get a one hour guided tour inside the magnificent monument but there’s so much to see. Inside you will discover a forest full of columns and double arches, the Maqsura, the Mihrab, and the impressive chorus located close to Mayor Chapel. The architecture is breath-taking and local knowledge by the tour guide takes you back into the medieval times.

The site of the original minaret is the place where the bell tower has been built. It’s possible to climb the steps to the very top for superb views of Cordoba. Stand in awe of a magnificent mosque, today a cathedral, which beautifully displays a combination of an array of religious architectural styles and successfully creates an astonishingly beautiful landmark.

Must Read: 8 Best Spanish Cuisines That Will Make You Fall In Love With Spain All Over Again!

It is one of the only mosques that has remained in the same state as it was in the Moorish period. It is a small square structure like it used to be back then and it tells the story of the city through its architecture. Though space is small, its grounds from the small square interior with Moorish horseshoe arches, to the outside gardens with views of the city transport visitors back some thousand years in time, making this a pretty special stop.

A fragment of Roman road is also present, well-preserved under the glass floor and a variety of Roman and later architectural salvage in the enchanting garden, which leads to a viewing balcony with great views of the Northern outskirts of the city. A definite must see and part of the discount bracelet scheme, which gives reduced entry prices at six of religious sites around Toledo.

Suggested Read: Visit These 10 Best Castles In Spain To Get A Glimpse Of Its Magnificent Past!

Castle Almonaster la Real’s fortified walls encapsulate the mosque which may not look the most beautiful monument but tells you a lot about the Moorish period as it one of the surviving architectures in the region. It is such a gem of history tucked away in the corner if Spain. The whole of the city is so beautiful and peaceful as it is not a touristy spot but a long walk around the mosque with views of valleys and birds chirping around makes it a must visit the place.

An elegant and imposing monument which finds a strong place in the history of Spain, the Alcazar Jerez de la Frontera was constructed first by Andalusia’s Moorish rulers, back in the 11th century. In the Monumental ensemble in the Alcazar of Jerez, you can see many centuries of history, it is very well preserved. It has huge towers and massive 4000m walls, climb to the top of this lookout to get a bird’s eye view of the whole city.

You can see a panoramic view of the city from the Camera Obscura. Stroll around the Palace to see its walls and towers or the back of the Cathedral.

This is actually the Islamic Cultural Center of Madrid plus a mosque. The Madrid Central Mosque or Abu-Bakr Mosque is a building located in the neighborhood of Tetuán district. During its construction, its proximity to the Estrecho (Strait) metro station gave birth to the popular name of the Strait Mosque. The building, spread over four floors, has in addition to the mosque and offices, a nursery, a school, a library, an auditorium and a shop.

It performs worship, charitable, educational, cultural and social functions. It is right in the center of the city and should be in your to-visit places on your next trip to Spain.

Join the queue to see Seville’s famous Cathedral once the site of a mosque and still retaining some features from that Moorish period of Spain’s history.   Once inside the scale of the place is breath-taking and that long queue of seemingly hundreds of people just disappears into its spacious footprint. There’s much to see including ornate altars, what purports to be the tomb of Christopher Columbus, some major ecclesiastical bling and last but not least The Giralda Tower, a section of the mosque that once stood here.

Suggested Read: 10 Most Stunning Churches In Spain That Are A Work Of Art

The Bashrat mosque is situated in Pedro Abad in the Spanish comarca of Alto Guadalquivir, province of Cordoba which is one of the famous mosque in Spain. Centre of the Ahmadiyya Movement which stirred Spain, the mosque has been of high historical importance. It has two minarets around it and it was built in 1982. Though it is not that famous, it has a great historical significance to it. It is the first purpose-built mosque since the end of Muslim rule at the end of the 15th century

It is an Islamic place of worship located in Marbella, Spain. It is of huge significance as it is one of the first mosque built in modern times in Spain. it is funded by Saudi Arabia. It can hold over 800 people and consists of housing for the imam, library and beautiful gardens. With palm trees dotting in a natural backdrop enhance the excellent Andalusian features. It has separate areas for the males and females and five times a day, the azan is repeated beautifully, over the loudspeakers.

Suggested Read: 15 Best Beaches In Spain To Bask In The Tropical Sun For An Exotic European Vacay!

It is a former Moorish mosque in Toledo and one of the old mosques in Spain. It was around the middle of the 11th century that this mosque was built in, on the foundations of Roman architecture, located in the old Muslim neighborhood Arrabal de Francos. In order to distribute drinking water throughout the city, the mosque was built on the walls of Roman water tanks. It is quite unfortunate that this hidden gem has neither been opened to the public nor been restored, despite being one of the only two surviving Mosques in the City of Three Cultures.

Giralda is the bell tower of the Cathedral Seville. With Renaissance style, it was built at a minaret during the period of Moorish rule. UNESCO, in the year 1987, recorded the same as a World Heritage Site. With a height of 104.1 meters, the minaret serves as a vital sign of the city of Seville. If permitted, you can take a horse ride up to the top of the tower.

Further Read: Italy Vs Spain: A Guide You Need To Read Before You Hit The Road

This is it from the rich Spanish Islamic culture. Spain is a beautiful country and these mosques magnify the same. So, plan a trip to Spain, pack your bags and go! Dive into the oceans and take a peek into the beautiful architecture and history that the world has to offer. Have a happy Spanish holiday!

How many mosques are there in Spain?

Going by the last estimation, there are about 13 large mosque and nearly 1000 small mosques in Spain.

What is the Great Mosque at Cordoba famous for?

Great Mosque at Cordoba is one of the oldest structures still standing. It is popular for its unique horseshoe shaped arch and the striking dome structure.

What is there to see in Cordoba, Spain?

Spain In November: Lose Yourself In The Vibrant Culture Of This European Country In 2022!