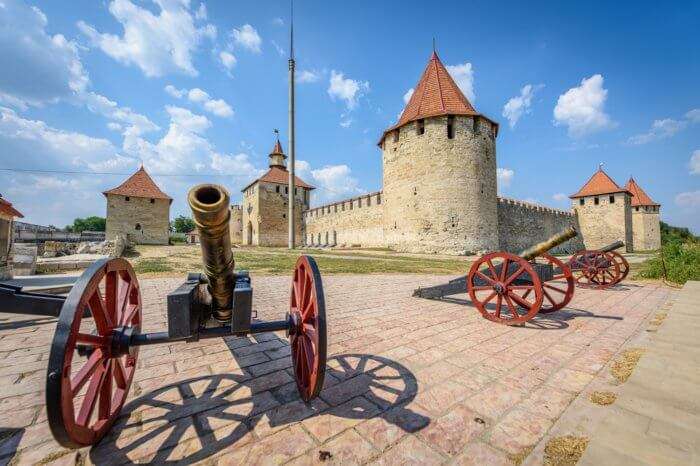 Castles are a signification of the architectural brilliance from the Middle Age, where without the existence of any modern techniques, architects and engineers devised beautiful buildings. Such was the glory of building castles that even now they stand erect in the same place they were built in, withstanding eras of life that passed by like dust. However, these Moldova castles still stand today, unharmed with minimal damages. Although one might find ruins that couldn’t withstand the past wars that created a vagueness on Earth, those that still exist are worth the praise. These castles have now been declared heritage buildings that are regularly taken care of as proper preservation measures.

Similarly, when in Moldova like any other place, the castles here are mighty and has a history that is attached to it. Hence, if you’re visiting Europe anytime soon then make sure to visit these castles.

Considered as a gem of the 16th century, the Bendery Fortress is situated near the medieval city of Bendery which is the official name of the place. The castles rest along the right bank of the river Dniester. Built during the rule of Ottoman, this fortress is closely located near the Bendery-Tiraspol bridge. This Ottoman fortress witnessed the intense battle between the Turkish and the Russian forces before it became a part of Tsarist Russia permanently in the recent 19th century.

The fortress housed the Russians and functioned as the army base for the Russian army and was declared off-limits to the public. However, it has now changed as presently it is open to tourist. This change is entirely credited to the thaw between Tiraspol and Chisinau, after which the castle complex was handed over for tourism. Presently, there is a hotel that is located at the entrance to the castle complex near the Bendery-Tiraspol bridge. The fortress is just 15 minutes away from the center of the town and takes about five minutes from the entrance to walk to the fortress. The walkway is adorned by domes of Alexander Nevsky Church which have now been restored.

Suggested Read: Winter In Moldova: A Detailed Guide To Explore This Lesser Known Country During Cold

The Soroca Fort displays the characteristic of late medieval defenses or fortifications which was highly influenced by Western European architecture. Located in the modern city of Soroco in the Republic of Moldova, this fort was built in 1499 and took about 200 to 250 men to build it. originally a wooden fort, this fort was made to defend a ford (a shallow stream) over the river Dniester. It was an important part that linked to a chain of other fortifications that included four other forts. The other forts are the Akkerman and Khotin on the river Dniester, two other fort on the Danube and three forts to the north, located on the medieval Moldova border.

Between the year 1543 and 1546. When Moldova was under the rule of Petru Rares, the Soroca fortress was rebuilt in stone. The new structures had five bastions situated at an equal distance and the fort was built to a perfect circle. During the Great Turkish War, the forces of John Sobieski defended the fortress against the attacks of the Ottomans. The fort was of vital military importance during the 17th century when the Pruth Campaign of Peter the Great took place. Today, the fort Is well preserved as the only historic landmark in Soroca. It is among the famous castles in Moldova.

Also known as the Earthen Fortress, the Prison Castle is one of the unusual Moldova castles, built during the mid-18th century, the construction of which lasted from 1843 to 1856. The entire idea of this prison castle was of an Italian architect known as Giorgio Torricelli. If one was to stand and look at the castle, you would notice how the architectural design of this place is different from that of the city. The Prison Castle features complex designs and orientation that have been influenced by several regions of the world. Since it was primarily made to be a prison, the appearance of the structure is however very castle-like for its elaborate medieval fortifications.

It has a massive 20-meter tower, thick walls and decorative triple iron gates that has loopholes. The building had it all, as the space of the interior portion of the castle was put to use that had utility rooms, a guard room, and prison cells. The entire perimeter of the building was connected to a system of ladder transitions and long corridors. The castle also has a conventional division of floors. The lower basement of the castle included household services, one man cells for dangerous convicts and warehouses. The second floor had a hospital and the third floor held juvenile prisoners and a church was constructed on the north side of the castle. Undoubtedly, even in those days, the prison was efficient for prisoners and staff.

Further Read: A View From This Europe’s Tallest Skyscraper Will Leave Your Jaw Dropped!

Well, that was the end of it with the best castles in Moldova along with a sneak peek of their architecture and their history. It can be said that the past of the Moldovan wasn’t as smooth flowing as they had to face multiple invasions. However, even today they stand strong like the castles and fortifications that have defended them in the past. So make sure to discover these castles on your next trip to Europe.