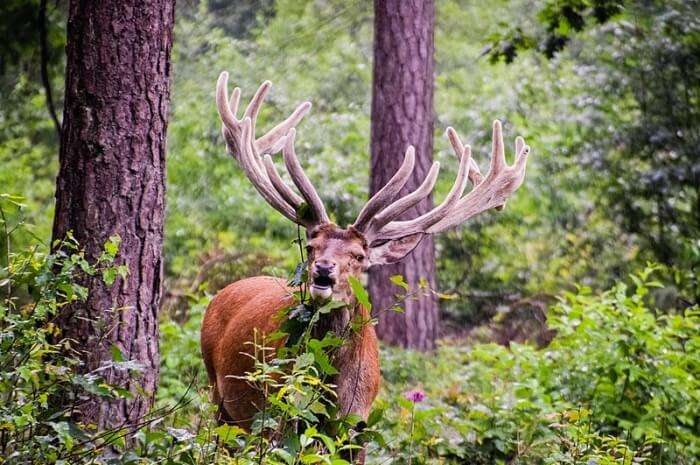 Those gorgeous water canals are what we all end up thinking of when it comes to the Netherlands. The capital, Amsterdam, is sometimes called Venice of the North for its elaborate canal system. Known for its tulips, biking culture and beautiful pieces of art and architecture, the country is home to some of the most beautiful landscapes in the world. The national parks in Netherlands are distinct and full of varying geography and geology, which makes for interesting trips around the country. Different species of plants, birds, and animals flock these parks and most of them are open for hiking or biking.

Read on to know more about the breathtaking national parks in Netherlands, which you can explore on your trip to Europe with your friends and family.

Located in Limburg, this beautiful national park is quite close to the Netherlands-Germany border. Spread along the river Meuse, the park is home to different species of flora as well as fauna. You can spot a number of various reptiles, hordes of birds along with quite a lot of butterflies and trees like oaks, pines, etc. The estate in this park De Hamert is also popular among tourists. The river here has the longest stretch of dunes in the Netherlands, which is why you won’t find much fish here. You can also go biking or hiking at this beautiful place which is surely one of the best national parks in Netherlands!

Must Read: Netherlands In Winter: A Guide To Explore The Serene Country In The Most Exciting Weather

The river Lauwers, flowing to the Wadden Sea, forms an estuary in the north of the country. There is a freshwater lake in the area now called Lauwersmeer, made by the flooding of the area, which led to a tremendous change in the flora and fauna of the region. The national park first started in 2003, and it is a huge attraction for bird watchers. In winter, the area is flooded by migratory birds like Tundra Swan, while the landscape is full of grazing animals. The park is also popular amongst skywatchers who love a clear sky with lots of stars to observe.

The largest in the area amongst national parks in the Netherlands, this place is different in terms of its topology and flora-fauna. The connection to sea leads to the changing terrain of the region, which is why many people visit the area. The mix of seawater and freshwater has given the low and high tides in the region have created interesting ecosystems here. There are thousands of birds flying to the park as well as a rich marine life full of crabs, oysters, shrimps and different kinds of fish.

The oldest national park in the country, Veluwezoom was first established in 1930 as a national park. It covers over fifty sq. km. area in the Gelderland province of the country. The park also is different in the sense that its highest point lies at about 360 feet from the sea level. The park is owned by a private entity, with rich flora and fauna. You will find dense forests here full of cattle, deer, and boars among other animals. You can take long walks and explore the countryside well.

One of the largest entries in this list of national parks in the Netherlands, this is a popular tourist destination. The park is famous for its various activities from walking, hiking, camping, fishing, biking, canoeing, and bird watching – the website even has a full-blown activities calendar, which will help you navigate your itinerary when it comes to this beautiful park. This is the perfect place to rejuvenate and relax. Full of neverending wetlands, the park has rich flora and fauna. You can take your kids and family here for an informative and educational yet fun trip in the wild.

Perfect for a weekend away, Texel is a small island just a few kilometers away from Den Helder. The island is mostly classified as Dunes of Texel National Park, where you can enjoy the sea, the land and the various creatures (seals, snakes and numerous birds) that walk inhabit the two. You can visit the museum here and explore the place on foot or bike. The dunes, marshes, beaches, and forests, along with a mix of freshwater and seawater topology make a trip to the island totally worth it.

Located in the North Sea, this diverse national park is on the island of the same name in the Netherlands. Full of dunes, beaches, polders, forests and marshes, the park sees over three hundred different species of birds migrate every year. The island has rare plants, sea-creatures and mammals, making it a natural reserve. You can spot different seals, goose, curlew, spoonbill, honeysuckle, sea lavender, etc. in the area. The region is also full of cycling routes, which means you can easily bike and walk here.

Full of tiny water reserves, forests and marshes, this countryside park is good for a relaxed weekend away. Devoid of a human population, the place makes for perfect detox. The area is full of animals like deer, polecats, boars along with different species of birds like cranes, geese and others which are prominently native to the area. The place is so secluded that it fits the “in-middle-of-nowhere” analogy to the t.

One of the few national parks near Amsterdam, this is the perfect place to explore the Dutch countryside away from the city. Located near the sea, the park has beautiful beaches and dunes with a number of things to do ranging from hiking, camping, riding, biking, etc. You can even book for a helicopter ride over the national park spotting the natural beauty of its varied landscape, shifting dunes and frothy waters, from the top profile.