The Netherlands In Winter 2020-21: A Country Tour Guide For This Exciting Season 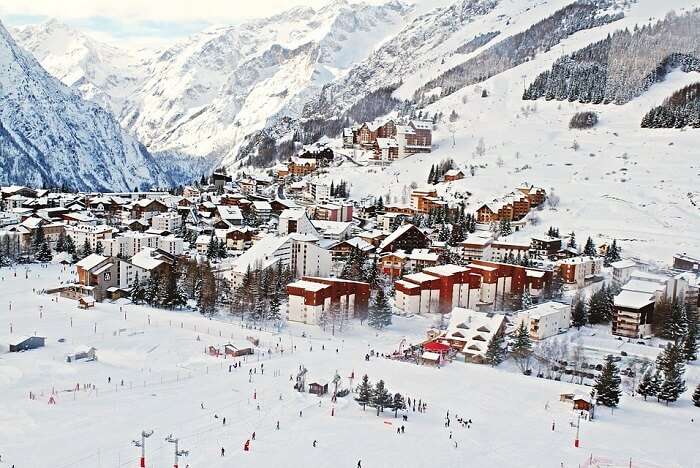 The Netherlands, a beautiful country in northwestern Europe, is well-known for its spectacular landscape which comprises canals, fields of tulip flowers, cycling pathways and windmills. In the winter season, which is at its peak in the month of December, the Netherlands transforms into a vibrant Christmas arena covered in snow. Here are the places to visit and things to do in the Netherlands in winter 2020-21.

1. Weather In The Netherlands In Winter

3. Things To Do In The Netherlands In Winters

4. What To Pack For A Trip To The Netherlands

Weather In The Netherlands In Winter

Places To Visit In The Netherlands In Winter 2020-21

Are you planning for a Netherlands winter holidays? Even though this country seems like a pretty modern destination, it accommodates a lot of hidden beaches in Netherlands, ancient monuments, and praiseworthy neo-gothic castles. Here are some of the most popular places that you must visit on your winter trip:

Marken is a beautiful island which holds an important part in the history of Netherlands. This spectacular peninsula was separated from the Dutch mainland in the year 1957 by the IJmer sea. Even after being detached from the mainland, it has continued to hold its rustic charm and is one of the most unique and attractive places to visit in The Netherlands.

Suggested Read: Honeymoon In Netherlands: Take A Romantic Vacay To The Land Of Tulips

This is an elaborate and charming castle in the Utrecht region of Netherlands. This marvellous architectural building was designed by Pierre Cuypers who was appointed by the aristocratic Dutch family in the year 1892. This exquisite castle features classic Dutch designs with inspiration drawn from the Gothicism of Northern Europe and is one of the best castles in Netherlands.

Bourtange is a village which was formerly a star-shaped fortress in the western part of Netherlands. This was built by the Dutch Military during the 16th century with an aim of controlling the trade routes which flow between Groningen and Germany. This splendid engineered space is open for public viewing and is a must-visit place for every traveller and explorer.

Things To Do In The Netherlands In Winters

During the Christmas winter season, the activities offered by the surroundings of this wonderful country is sure to lure in travellers from every part of the world:

The Deventer region in Overijssel province hosts one of the best festivals in Netherlands called the annual Dicken Festival which celebrates the well-known author Charles Dickens. This event takes place in the historic location Bergkwartier. Several characters from his books come into life during this event reminding each person here of their lovely childhood. People come dressed as Scrooge, David Copperfield, Oliver Twist, Fagin and others.

During the winter month of December, this beautiful village transforms into a vibrant shopping destination. The stalls at the shopping streets here give the feel of the shopping experience in the markets which existed centuries ago. This is a unique way of paying homage to the historic Christmas markets in the past. This snow-covered village looks wonderful with all the colourful Christmas lighting.

Suggested Read: 22 Best Places To Visit In Netherlands In 2021: The Perfect Mixture Of Art And Culture

In the northern region of Netherlands, the water in the canals and lakes generally freeze during the winter season. These offer an excellent opportunity for ice-skating enthusiasts. One can witness several locals enjoying this unique experience during winters and visit some of the best churches in Netherlands. Even though there are artificial rinks available during other months, the experience of skating on real ice is unbeatable.

Suggested Read: Top 9 Places To Visit In Zagreb To Savor The Best Of South Europe In 2021

From the authentic mulled wine of Gluwein to the beautiful little handicrafts, try your hands at the stalls lined up on the banks of Groningen’s canals during winters in Netherlands. While going for a ride on the canal boats happens to be one of the classic activities, do not miss out on the live performances, concerts, art exhibits, and dining in some of the best restaurants in Netherlands that one can be a part of and enjoy at this famous Christmas market.

What To Pack For A Trip To The Netherlands In Winters

We are sure that by now you know what a wonderful destination Netherland in winter becomes when the temperature drops. Head to the Netherlands in the winter season by planning a trip to Europe right away and make memories that would last a lifetime.

Which are the winter months in the Netherlands?

Late December to March is the winter season in the Netherlands.

Netherlands is located near the North Sea and the Atlantic Ocean, therefore it has a temperate maritime climate. Netherlands in winter experiences moderate climate with daytime temperatures ranging from 2 degree Celsius to 6 degree Celsius.

In Amsterdam, the temperature in winter drops ranging between 4 degree Celsius to -1 degree Celsius. The capital city also experiences snowfall and rainfall during this season.

How often does it snow in the Netherlands?

The Netherlands experiences snowfall only for about 20 – 30 days a year. And the snowfall indicates that the temperatures are rising.

Does it snow during winter in Amsterdam?

It snows occasionally in Amsterdam as the Netherlands just sees a total of around 20 or 30 days of snow in a year, and one is pretty lucky to see a snowfall here. The city turns into a winter wonderland if there is a snowfall.

Is there a requirement of winter tyres if traveling through the country by car?

The Netherlands winter tyres do make it easier for traveling during the winter months. But, it is not a mandatory requirement for traveling in this part of Europe.

Which are the Dutch cities which must be visited during the winter season?

The must-visit cities in the Netherlands during winter are Amsterdam, Utrecht, Haarlem, Leiden, Hague, Delft, Gouda and Maastricht.

What is there to do in Amsterdam in December?

A few things to do in Amsterdam in December are:
1. Celebrate Sinterklaas
2. Go Ice skating at the Leidseplein
3. Shop at the Christmas markets

Is there any Christmas market in Amsterdam?

Yes, there are Christmas markets in and around Amsterdam where one can buy Christms gifts and enjoy Dutch treats like:
1. Funky Xmas Market
2. Amsterdamsche Kerstmarkt
3. Winter Village Stadshart Amstelveen

Bachelor Parties In Sofia: Just What Your Best Buddy Needs Before The D-day

Millennium Bridge: A Guide To Experience Visiting A Bridge Like Never Before!

Finland In April: A Guide To Explore The Paradisiacal Views Of This Paradise In 2022!

Shopping In Croatia: 5 Best Places To Let Yourself Loose On A Shopping Spree

Outer Hebrides: A Guide To The Lesser Known Islands On Scotland’s Coast

Kathmandu In June 2022: A Pocket Guide For Planning A Blissful Summer Getaway