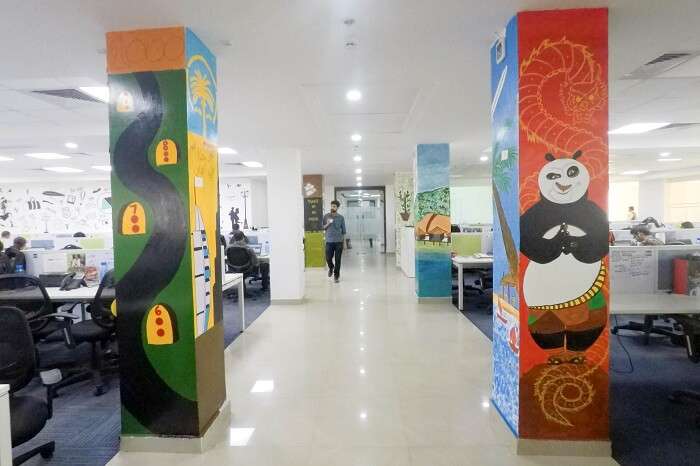 As the winter draws to a close and the weather warms up, it is love in the air that replaces the winter chill. And this season – the season of love – is generally marked by sweet humming of birds, buzzing of bees, and people falling in love. However, scientists associate the ‘love sickness’ with dopamine; a chemical locha in the brain used to make you want things. And one such desire is that of a great workplace, with a job that one loves.

As it happened: The Pillar Design Contest

Theme: What do you love about your work / team

The central theme was aimed to highlight the things that the employees loved about the work or their team. Each team was allotted a pillar to paint. And the results were truly unpredictable.

One of the winning entries was that of the Sikkim-and-Andaman team, which showcased their common love for food & nature through the art on their pillar. The paintings on their pillar included elements such as snow-capped mountains & beaches from the two destinations, scuba diving, and beautiful roads in the hilly terrain. And the team’s love for food was evident with an entire wall dedicated to the same. Now that’s interesting, isn’t it?

Winner 2: Unity in diversity is the beauty of our civilisation

Then why should this team be any different! It was this very idea of the FC team that won it a prize in the pillar design competition. The team used simple graphics & beautifully presented its role in the booking process of travelers. That, my dear friends, is exactly how stories need to be told; simply and elegantly.

Winner 3: Multi-tasking with a common goal of solving travelers’ problems

You wouldn’t expect anything less from the product & analytics team. The team actually went on to ask the question – What do you love about your work – from every team member, and illustrated the same all the more beautifully. But the cherry-on-the-cake was the preamble they came up with for the future Product Bible.

“We, the humans of Product and Analytics at TT, pledge to solve traveler problems by using Sherlock’s magnifier to look at data and strive to constantly learn and evolve. In love with all the Travel Talks, we are happy to multi-task and provide comfort for our fellow triangulars”

Let’s take a tour: A walk through the TravelTriangle alley

With the employees burning the midnight oil to express their thoughts in the best way possible, the enthusiasm of the employees finally showed its true colors towards the end of the contest.

Hues of red, blue, and green had now given a pictorial form to the vibrant atmosphere that had always been present in the office space. And the essence of travel was now imbued in the very walls of the office.

But the aura of travel had long permeated through the office

It was only recently that TravelTriangle consolidated its NCR operations and moved into a swanky new office, replete with an air of vibrancy and positivity. The entire office space is adorned with beautiful illustrations and designs.

The meeting rooms here are named after popular destinations.

These included Gujarat, Kerala, South Africa, Paris, Greece, etc. Each of these rooms has been decorated as per its own theme. While the Gujarat room was adorned with kites, puppets, & dandiyas, the Paris room had a dreamy aura with the iconic Eiffel Tower showcased in its interior.

The wall features some of the most prominent landmarks, including the Big Ben, the Statue of Liberty, the Burj Al Arab, the Leaning Tower of Pisa, and more. What’s so special about the wall is that the entire artwork has been done by TravelTriangle’s own employee.

It’s wonderful how the HR and Admin teams at TravelTriangle found a way to celebrate the season of love with this contest. And the overwhelming participation of the employees was equally delightful. Perhaps that’s what drives a positive work culture. Don’t you think so?

An Absolute Post-Covid Travel Guide To Delhi: Exploring The Capital City With All The Calm

Delhi In March 2021: A Little Guide To Fall In Love With The City All Over Again