Plitvice Lakes In Croatia: An Ultimate Guide That Leads You Straight To Paradise 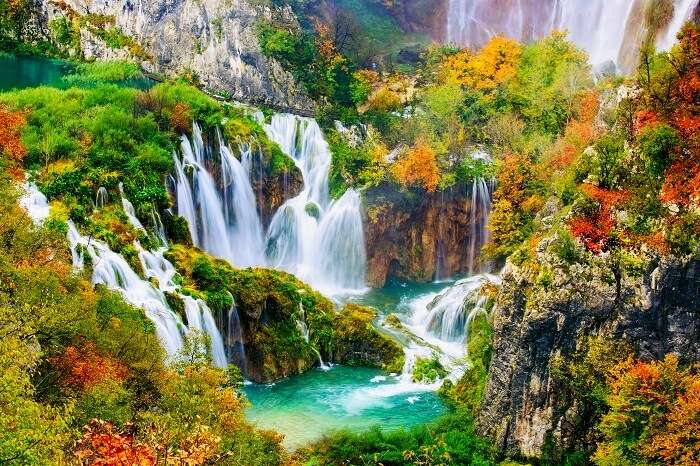 When you are in Croatia, one of the most breathtaking places to see is the Plitvice Lakes National Park. Being one of eight national parks in the country, it stands out among the rest because of its incomparable natural beauty. The jewel of the mountainous central Croatia, Plitvice National Park is located at the Bosnia Herzegovina border, between Zagreb and Zadar.

This awe-inspiring feat of nature was listed as a UNESCO World Heritage Site in 1979, and one of the most renowned features of the park are the Plitvice Lakes in Croatia. Also known as the Croatia lakes, this is one natural attraction in the country that you should not miss at all.

About Plitvice Lakes In Croatia

Taking the hikers and trekkers through four different trails, one can explore these lakes via seven different routes as well. While the guided tours are a great option, the trails in this area are clearly marked so you should have no trouble exploring on your own with the help of a Plitvice Lakes map.

While there are a total of 16 lakes, the whole system is divided into two parts of Upper Lakes and Lower Lakes. The Upper Lakes are comparatively bigger in size and they are as follows:

On the contrary, the below-mentioned Lower Lakes and its combination is what results in the canyon formation and flow into the waterfall of Sastavci.

When it comes to Croatia lakes holidays, there is nothing like planning one in winter. This is a magical time to see Plitvice Lakes and the waterfalls in Plitvice National Park. Even if you have seen the lake during other times of the year, there is nothing that comes quite close to seeing it in winter. Seeing the park covered in snow is a spectacular sight you will not forget any time soon.

Suggested Read: 12 Buzzing Croatian Festivals To Experience The Country’s Culture & Enjoy Every Bit Of It

During the winter season, the Upper Plitvice Lakes remain closed, but it means few crowds and a less expensive entrance fee. Visiting Croatia lakes in Plitvice winter is a great idea as they are frozen during this time of the year. Combined with the snow all around and the frozen waterfalls, it makes for a stunning sight. While most people do not think about visiting Plitvice National Park in winter, you should definitely consider it as it allows you to see the park in a whole new light, and gives you a brand new appreciation of this natural wonder’s breathtaking beauty.

Getting To Plitvice Lakes

The first thing you must be wondering is how to get to Plitvice Lakes. You can opt for a guided visit or take a tour. You can book a tour to visit the lakes from Zagreb and Zadar. Most people prefer traveling from Zagreb to Plitvice Lakes. Located 130 kms from the park, it takes about 2 hours to drive from the city to Plitvice National Park. Zadar is located about 118 kms from the park and takes about an hour and a half to drive there.

Currently, the one-day Plitvice Lakes tickets cost 150 to 250 Kunas or INR 1600 to 2600 while two-day tickets cost 250 to 400 Kunas or INR 2600 to 4275 approx per person. The ticket costs considerably less in the off-season and with the entrance ticket, you get a boat ride on the lake as well as a tourist train that takes you back to the entrance. In summers, the park is open from 7 AM to 8 PM and the second entrance of the Plitvice National Park is closed from October to March. At the first entrance, parking costs 7 Kunas or INR 75 for one hour, and 70 Kunas or INR 750 per person for one day.

When you plan a trip to visit Plitvice Lakes, it is a good idea to have an early start and arrive as early as possible. The main reason for this is you can be done by lunch time. As the food offered within the park is extremely overpriced, you might as well carry your own snacks to avoid having to spend money on food and beverages.

Mesmerized much? Get going to visit these Plitvice Lakes in Croatia that will make your next holiday in Europe one of the most memorable journeys of your life.

10 Alluring Lakes In Japan That Look Like They’re From Another World!