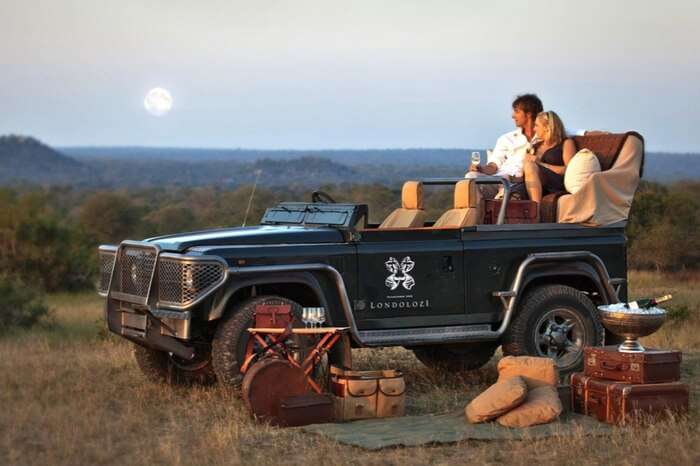 If your idea of a perfect honeymoon is about exploring the riches of vivid wildlife and staying in a desert camp sipping the best bubbly available in town, then a safari honeymoon in South Africa is your best pick.  As you make a new beginning, take a trip into the wild with your beloved and enjoy a thrilling honeymoon with South Africa’s top wildlife safari experiences.

The highlights of a safari honeymoon in South Africa include watching wild animals of Africa in their natural habitat and a stay in rustic accommodations that look straight out of a luxury desert-life fantasy. Romantic rendezvous include dining with a grazing giraffe, open-air spas, and moments of quietude by the setting sun behind the vast Savanna Grasslands. You can also take short trips to various honeymoon places in South Africa that might be around your chosen safari honeymoon destination.

The exceptional locations of South African safari unveil a world of untamed wild and wilderness. It is the beauty of these locations that make South Africa stand out among other countries in the African continent. From pristine beaches and adjoining island nations to wild game reserves and ocean-front honeymoon suites, these exquisite honeymoon places have been carefully curated to match the fancies of newly married couples.

Also, South African mountain areas – like Drakensberg and Capetown – are quite beautiful during the winter months as some parts see rainfall. Apart from the rains, it is a good time to enjoy a bath in a rock pool, stay in plush jungle lodges, sit by the mountain streams, and gorge on delicious food and wine.

How to reach South Africa

By air: O.R. Tambo International Airport, Johannesburg is the largest airport in South Africa and is well connected with major cities across the world. Direct flights from India to South Africa are available only from Mumbai, however, connecting flights from Delhi, Kolkata, Chennai, Bengaluru, Ahmedabad, and Hyderabad are available.

By sea: Ships from Port of Mumbai to Port of Capetown, Port Elizabeth, and Port of Durban are available. The journey by sea takes around 20 to 25 days.

Best time for a safari honeymoon in South Africa

April – May & September – October are the best months visit South Africa for a safari honeymoon. The weather is pleasant and storms are rare.

6 breathtaking places for a safari honeymoon in South Africa

Prepare yourself to experience the wilderness at its best at Kruger National Park. A safari here – in one of the longest game reserves of Africa – is the best among many romantic things to do on your honeymoon in South Africa. Studded with the incredible views of nature, Kruger and its vast wildlife reserves are going to be an exciting part of your safari honeymoon in South Africa.

Kruger National Park’s key attractions are the elusive Big Five – African lion, African elephant, Cape buffalo, African leopard, and rhinoceros. Besides, you can spot African elephants, giraffes, and hippopotamus among many other animals. The experience is going to be special as this is the closest you can get to the fiercest predators that walk the earth today!

Romantic experiences in and around Kruger National Park:

Note: Explore the best of secret Africa by planning a tour of Manyeleti Private Game reserve

Bordering The Kruger National Park, Sabi Sand is the ultimate home to South Africa’s untamed wild animals and thus a preferred destination for a safari honeymoon in South Africa. The region is particularly known for the eminent presence of leopards, besides being home to 300 bird species and the Big Five.

As you lay in relaxed in the pool along with your spouse, holding a bottle of champagne and beholding the spectacular sunset view you know you are at one of the best honeymoon places in South Africa.

Exciting things to do on a safari honeymoon in Sabi Sabi:

User reviews of a safari honeymoon in Sabi Sabi

3. Waterberg – A quaint nest for the lovebirds!

Waterberg, one of the best-kept secrets of South Africa, is a mere 2-hour drive from Johannesburg. Sprawling countryside and temperate climate make Waterberg a popular destination for safari honeymoon in South Africa. It is nestled in the rocky surroundings and dense vegetation in the Limpopo Province.

Key attractions of Waterberg’s wildlife are the frequently viewed lions and tuskers, along with a variety of snakes and reptiles. Also, don’t miss the Bushmen Rock Art that dates back to the stone age.

Exciting things to do on a safari honeymoon in Waterberg:

User reviews of a safari honeymoon in Waterberg

4. Madikwe – A treat for the newlyweds

Madikwe, the fifth largest game reserve in South Africa is a picture perfect honeymoon destination located in the South African mainland. The relatively less explored destination treasures breathtaking landscapes, wildlife, and unique experiences for adorable couples. The best hideouts have been planned in the jungle, close to the best vantage points, from where you can watch the animals in their natural habitat.

Madikwe lures newlyweds with its rocky grasslands and woodlands, wildlife safari at Madikwe Game Reserve, luxury award winning lodges, and bush hideaways. Also, it boasts of the second largest Elephant population in the South Africa along with the endangered lot of wild dog, cheetah, and black and white rhinoceros.

Exciting things to do on a safari honeymoon in Madikwe:

5. Kapama – A date with the Big Five of Africa

Image Source
The secluded environs you come across during your safari honeymoon in Kapama Game Reserve make it a recommended romantic sojourn. The activities offered here are definitely the most exciting things to do in South Africa before you die! From private game drives to romantic spa, the choice is spoiling to the core.

On a safari to Kapama Game Reserve, you can spot cheetah, buffalo, elephant and antelope and ferocious predators, among others. But the best vistas you encounter are as timeless as spotting the Big Five, spending a night under the star-studded colossal sky, staying in a wooden lodge in the wilderness, and dining in the woods.

Exciting things to do on a safari honeymoon in Kapama:

User reviews of a safari honeymoon in Kapama

6. Capetown – An experience that would last forever

Capetown city jutting into the Indian Ocean is the perfect place to go on a safari honeymoon in South Africa. It is known for its relaxing retreats overlooking magnificent vistas, lovely stays amidst the woods and breathtaking swimming pools. Also, there are secluded bush walks around the lodges that make for one of the most romantic things to do in Capetown South Africa.

Among the most incredible things to do on a honeymoon in Capetown features a trip to Inverdoom Nature Reserve, and a taking a stop at the Lion Project – an organization that works towards the betterment of lion population. Other attractions are wine estates of Capetown offer village-style accommodation and shopping at the V&A Waterfront.

Best honeymoon hotels in Capetown: The Bay Hotel, The Twelve Apostles Hotel and Spa, MannaBay, and One & Only Capetown

Exciting things to do on a safari honeymoon in Capetown:

How much a South African honeymoon safari cost?

The average cost of the South African honeymoon safari ranges from $800 to $1000 per person for a night. Despite being an underdeveloped country, Africa is famous for its camps and safaris.

Which African country is best for safaris?

Mozambique, Rwanda, Tanzania, Namibia, South Africa, and Uganda are some of the best places in Africa where you can opt for safaris.

No, safaris in Africa are totally safe. Moreover, the instructors help out the travelers and give some tips to ensure the safety of travelers.

Which Safari is better Kenya or South Africa?

South Africa has created a niche in the tourism sector as the best place to go to for a luxury safari. It has a well-established reputation among travelers and also organizes private tours on demand.

Which is the best month for an African safari?

May to October marks as the winter dry season in Africa which is when the game viewing is at the best. You will find thirsty animals at waterholes and others come out from their caves.

What do you wear on a safari evening?

Make sure that you dress appropriately for a safari. Wear long pants with a long-sleeved shirt and sneakers or shoes with a light jacket for a perfect safari evening.