Stockholm In December: An All-inclusive Guide To This Swedish Winter Wonderland 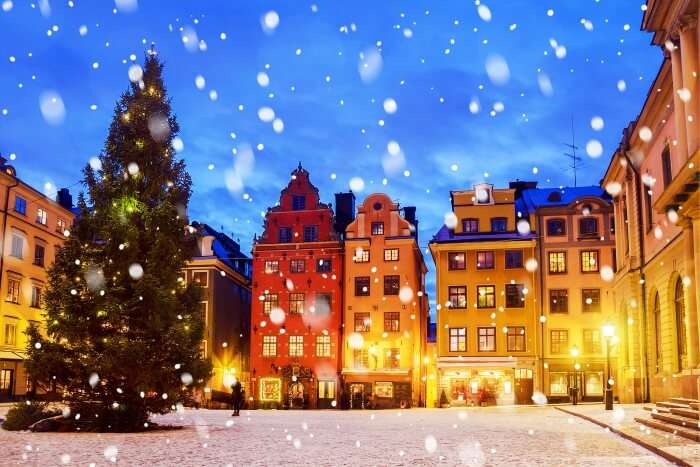 Stockholm is one of the most populous cities in the Nordic countries and is the capital city of the country of Sweden. More than a million people live in this historic city in the Northern European region and it is visited by tourists from all over the world. It is a great place to experience a true winter as Stockholm becomes a winter wonderland in the months like December when the temperature dips below freezing. Stockholm experiences snow during December and is a great choice for tourists visiting the area.

About Stockholm In December

Winter in Stockholm is the perfect time to visit Sweden. It is close to the coast and the temperature does not dip as low as some other parts of Sweden because of the coastal weather. Stockholm is picture perfect in the winters and there are many tourist destinations and winter activities to do while in Stockholm in winter.The answer to the question does it snow in Stockholm in December is yes it does. So tourists visiting in December must know the weather before visiting this city.

What To Wear In Stockholm In December

It is very important to know what to wear in Stockholm in winter. It is very cold in Stockholm during winter but it is not very different from places like London and New York during these months. Wearing layers and even thermal underwear makes sense. Besides layers of warm clothing accessory clothing items like scarves, hats, gloves, and warm waterproof boots are a great choice. Different winter activities in Stockholm need different types of warm clothing items and tourists need to pack appropriately while visiting Sweden.

Best Places To Visit In Stockholm In December

Take a look at the best places to visit in Stockholm in December for a heartwarming holiday!

When tourists visit a city, the top museum is always a great choice to visit for tourists. In Stockholm in December, this beautiful museum is the top choice. This indoor museum, which houses the famous Vasa Battleship which sank on its maiden voyage in the 17th century, is a great choice. This museum showcases the history and culture of the Swedish people and a wonderful indoor tourist option in the winter in Europe. You can also go for day trips from Stockholm in december.

One of the best things about winter in places like Stockholm is visiting the Ski Resort. Hammarbybacken is a great ski resort in Stockholm where people can enjoy the great slopes in the winter months. This resort is situated near the Erickson Globe Arena and is a landmark in the city. The Stockholm weather in December is perfect for a visit to a beautiful ski resort like this. The ski resort has a downhill slope, Snowboard Park, ski school, equipment rental, and a café. This is an ideal choice for tourists visiting Stockholm.

The Royal Palace looks absolutely spectacular in the winter months. The large impressive structure looks magical in the winter months and a must visit for tourists visiting Stockholm. It is the residence of the royal family, and the palace has over 600 rooms designed in the Italian baroque style of architecture. Tourists can visit this palace and can explore various rooms in the palace and a perfect choice in Stockholm in December. Some of the attractions in the palace include Rikssalen which is the Hall of State, Queen Kristina’s silver throne, Gustav III’s Museum of Antiquities, the Treasury and the Tre Kronor Museum.

Things To Do In Stockholm In December

Take a look at the best things to do in Stockholm in December for a soul-stirring holiday!

Ice Skating is one of the great joys of winter months. Vasaparken in Stockholm has an ice skating rink which is truly spectacular in the city. Skating is free on this ice rink and it is an affordable tourist activity for visitors in Stockholm. Ice skating is a lot of fun alone or with friends and family and it is a perfect outing for people living in the city and for tourists in Stockholm. When the winter temperature of Stockholm dips in December, it is a perfect time to go to this ice skating rinks in Vasaparken and Kungstradgarden.

Another great choice for tourists visiting Stockholm in winter is taking a gastronomic tour of the city. Stockholm has a very dynamic and vibrant food culture where Swedish and Nordic cuisine is celebrated. There are restaurants serving cuisines from all over the world and the restaurant scene in the city making it a truly global city. New Nordic cuisine, western cuisine, Asian cuisine, and fine dining restaurants are all popular in the city.

Stockholm winter daylight hours are short so visiting the food market in the morning is a great choice. There are vegetarian restaurants like Hermans and Rutabaga that are great choices for vegetarians visiting the city. Pizza places, beer and brewery places, gastronomic places, and burger joints in the city are great choices. Paradiset Organic Market is a wonderful place to visit for tourists visiting Stockholm.

The temperature in Stockholm in December is similar to many major western capitals and it is not as cold as some of the interior regions of the country of Sweden. When visiting Sweden, do remember to look for other tourist attractions in this amazing country.

Q. Does it snow in Stockholm in December?

A. Yes, it does now in Stockholm in december.

A. Sweden gets very cold in winters with temperatures going as low as -22 degree celsius.

These 7 Things To Do In England Must Be On Your Itinerary For A Fun Trip!

7 Best Adventure Sports In Gujarat One Must Definitely Try Out In 2020!

7 Best Adventure Sports In Ahmedabad Which Will Give You That Adrenaline Rush In 2020!

Maldives Surfing: A Handy Guide To Enjoy This Fascinating Activity In 2020!

Hiking In Switzerland: A Guide For Embarking On A Journey With Splendid Views In 2020!