Sukhothai Historical Park: A Detailed Guide For Tickling The History Buff Within 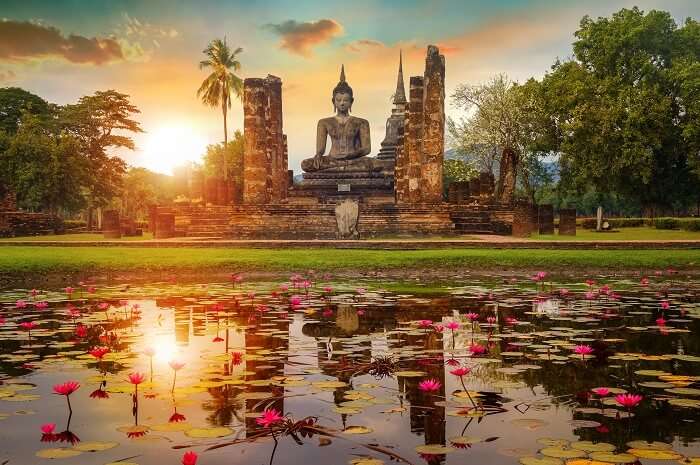 Sukhothai Historical Park or the old city of Sukhothai which means “Dawn of Happiness” was the first capital city of Thailand but is now in ruins and has become a world heritage site and an important place in Thailand. It nests in the contemporary city of Sukhothai and opposite of Ramkhamhaeng National Museum.

About the Sukhothai Historical Park

The walls of the old city stretch about 2km east to west and 1.5 km north to south and there are 193 ruins within 70 km of land, the park is divided into five different zones, the central zone is where the royal part of the city was located, the other parts of the city is large and ideal to travel on vehicle though some zones like the south zone is not worth the time to travel. The central zone holds within it 21 temples and the most popular and important temple is the Wat Mahathat which was the royal temple and was the spiritual centre of the Sukhothai Kingdom, to the north is Wat Phra Pai Luang which is the original site where the Sukhothai Kingdom started. Numerous Buddha statues, carvings, artefacts etc. are housed within these numerous temples and houses. The Sukhothai Kingdom is under the management and protection of the Fine Arts Department and Ministry of Culture.

Must Read: Top Experiences In Thailand That You Absolutely Cannot Miss On Your Exotic Vacation

Months from November to February the temperature in Sukhothai is cool and ideal for sightseeing and travelling, while July and October rainfall might interrupt your plans and from March to June the summer heat might be too much hence travelling from the months of November to February is recommended but if you want to experience the culture then visiting Sukhothai during the Loy Krathong festival is best as this festival runs for 9 nights during the full moon of the 12th lunar month which is in either October or November, so book accommodations early and find out when the festival is being held.

Things to Do at Sukhothai Historical Park

The most you can do in the Historical site is sightseeing and below I will list a few of the famous temples and sightseeing places along with a few other things.

Image Source
This is one of the main attractions of the historical site, the temple consists of ten viharns, eight mondops, one bot, one chedi and 200 smaller chedis, within the main lotus shaped chedi houses two relics of the giant Buddha brought from Sri Lanka and the remaining smaller chedis contain ashes of noblemen. A popular photograph site.

This temple is on the original site where the kingdom was founded and the architecture is a combination of Khmer and Lopburi, it houses one of the three remaining corn-shaped prang which were adorned with stucco decorations and served spiritual roles.

One of the more popular site as it is the sole standing mandapa and house a giant seated Buddha image made out of bricks and stucco, the double layered walls contain a passage that leads all the way up to the Buddha’s head while the walls contain murals and marking.

Suggested Read: An Insider’s Guide To Unlock The Divine Secrets Of Wat Arun Temple In Thailand

Opened in 1964 it is a part of the historical park and it showcases artefacts and objects which were donated by Phra Ratchaprasittkhikhun, who was the abbot of Ratchathani Temple, along with locals and they all originate from Sukhothai. The collection consists of Buddha statues and images, sculptures of Hindu gods, sculptures from pre-Sukhothai period etc.

If you time you visit to the historical site carefully then you might make it for the festival of lights which is held for over nine nights around the 12th Lunar month’s full moon, during the festival the ponds and lakes are covered with floating lights along with the ruins, there are light and sound shows, parades and concerts in the city.

How To Reach Sukhothai Historical Park?

Sukhothai can be reached by bus from near and far even though it only has a small bus station, you can also take the train from Bangkok to Phitsanulok which takes 7 hours and then take an hour bus ride to the city, there is also two flights that flies from Bangkok to Sukhothai Airport and cost around 2900 bhat and take only around 1 hour.

Further Read: 8 Incredible Udon Thani Restaurants That Are Winning Hearts All Over Thailand

Sukhothai National Park is a culturally rich place that is worth a visit if you want to know about the history and culture of Thailand. So, plan a Thailand holiday right away and treat the history buff within!