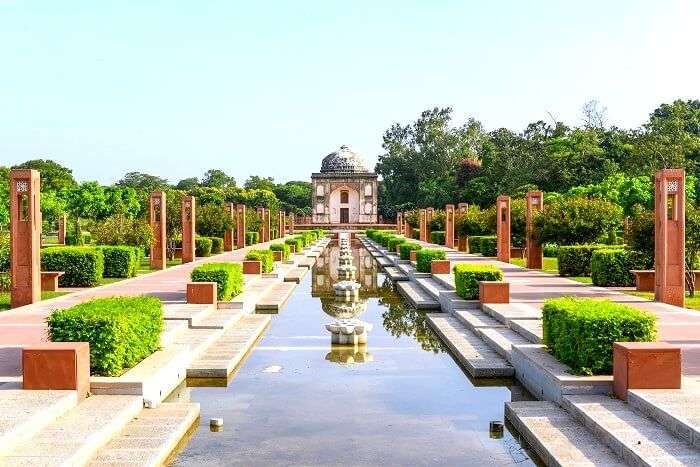 Must Read: 10 Picnic Spots Near Delhi Perfect For A Quick Summer Break

In partnership with the Central Public Works Department and the Archeological Survey of India, the Aga Khan Trust for Culture (AKTC) has played a huge role in restoring the Sunder Nursery which once, used to be a wasteland. After a decade-long process of restoration, the nursery has now been opened to the public, with a makeover so unbelievable, that people have started calling it the ‘Central Park’ of Delhi. The 11-year-old restoration project finally revealed its colors on 22nd of February when the park was officially opened to the public.

About The Newly Opened Heritage Park In Delhi

The architectural ruins of the Sunder Nursery have been restored with utmost care, keeping in mind, the authentic designs and layover of the monuments. A few important highlights of this Nursery include:

Featuring some of the most important historical monuments, the Sunder Nursery is a perfect place for the history buffs as well. While exploring this place, one would definitely feel the historical vibes reflecting from each and every part of the nursery. Sunder Burj, one of the 6 monuments, is an alluring tomb that features intricate inscriptions on the walls, and star-shaped patterns on the ceilings. A 16th century pond with Persian carpet designs was also discovered during the restoration process. The awe-inspiring landscape has been laid down on the lines of Mughal gardens to keep the historical aspect alive.

Apart from the historical aspect, the aim of restoring this place was also to create an environmentally beneficial ecology. Therefore, this nursery features around 4,200 trees, and 20,000 saplings, which make up to 300 different species of fauna.

Here are some more amazing pictures of this wonderful spot:

While there is no entry fee to gain access to the park right now, the concerned authorities will start setting up ticketing booths in the month of October when facilities like a cafe, a souvenir shop, lecture rooms and toilets will be made available for public use.

So, Delhiites! What are you waiting for? Bring out those expensive DSLRs and put them to use. Change the destination of your Sunday outings to the newly opened heritage park in Delhi, the charming Sunder Nursery.

17 Things To Do In Daman In 2021 That Will Make You Crave For A Vacation At This Tropical Paradise!

These Cafes In Shimla Are A Heavenly Pit Stop For Food Loving Travelers!

Char Dham Yatra Opens For All Pilgrims: Know All About The Guidelines For The Sacred Pilgrimage!