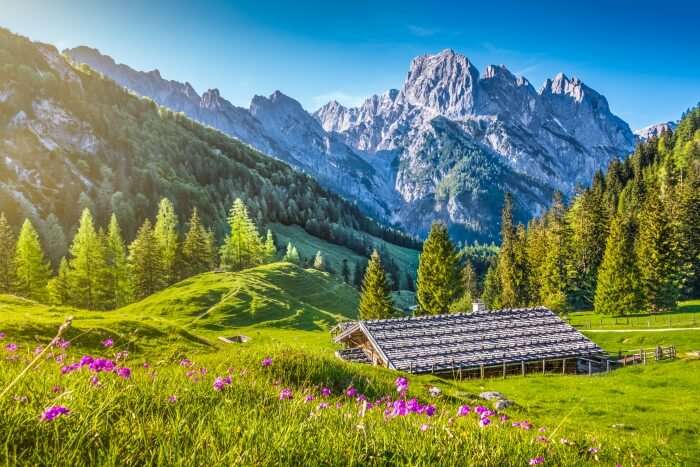 Switzerland is the land which is well-known for its eye-catching landscapes and natural beauties. And Swiss National Park takes the crown for being of those. The park is situated in the distant southeastern corner of Switzerland. Also, the park is in the divine Engadine valley at a height of 1400-3170 meters and the park covers the area of approx 172 square kilometers. It is about two and a half hours away from Zurich to Swiss National Park.

Thanks to the visitor’s favorite 80 km of hiking paths that are known as Swiss National Park hiking, which is famous the nature trails as well as an excursion destination for the kids and families. Everyone can enjoy a good time in the Swiss National Park Camping program. The Swiss National Park was founded in the year 1914 and it is one of the oldest parks in the Alps. The park offers many attractive sites such as – charming rivers that are winding through the deep valleys, high mountains, wildlife such as —chamois, golden eagles, deer, birds, marmots, ibex — and thick and broad forests range. Dazzling wildflowers blossom along with the 80 km of hiking trails add extreme beauty in the place.

The rules of the park are strict: no camping or fires or hunting, no straying from trails, and no picking of mushrooms or flora in the park. These steps protect the wild-life in the park.

Must Read: Top 10 Places To Visit In Switzerland During Winters In 2018

Facts About The Swiss National Park

The Alps in the Swiss National Park are quite young as the mountain range. Moreover, the Alps are frequently rising as a result of European and African tectonic plates that are approaching against each another. The Swiss National Park’s height ranges from 4592-10,410 ft. or 1400-3173 meters above the sea level.

Furthermore, a lot of trails in the Swiss National Park are categorized according to the skills and equipment necessary to follow them. You will find three main natural categories in this place – yellow- regular trail, blue- the alpine trail, and red- the mountain trail. The yellow or the regular trails need no expert skills or equipment. Red or the mountain trails are suggested for the people who are in good outline with the hiking boots because the red trails might include steep and the slippery trails. Finally, blue and the alpine trails are the technical hikes that may occupy the climbing or glacier traversal, thus, these trails require the alpine equipment.

How To Get To Swiss National Park?

One can easily reach the park by following the Swiss National Park map available on the Internet. Moreover, the easiest and the fastest method to reach to Swiss National Park is –by taking the train via Zurich to Zernez, which is of 2.5 hours one way. One can also reach the Swiss National Park by taking the postal bus service. The bus service is according to the daily timetables. When the traffic and road conditions are ideal, the driving via bus and taxi take the similar amount of time as that of train i.e. 2.5 hours. The traffic jams and delays are the common issues, particularly in the winter seasons.

There is a single road that runs throughout Swiss National Park and the road is recognized as – Pass dal Fuorn. Even as the road is mainly open for the public use and the public transports such as the postal bus service which is extremely recommended. Moreover, you get nine parking lots along this route and the frequent bus stops that offer access to the Swiss National Park trails. The road is too much busy, as well as it is quite narrow, so, the pedestrian use in this path is discouraged.

Suggested Read: 9 Astounding Things To Do In Interlaken, The Adventure Capital Of Switzerland!

Rules And Regulations Of The Swiss National Park

For conservation and protection purpose, there are numerous park rules that are established and there is major fine, for those individuals who are found to break the park rules:
The park’s visitors are not allowed to leave any kind of marked footpaths.
Individuals are not allowed to eliminate any flora and wood from Swiss National Park.
Visitors are strictly advised not to disturb, harm or hunt to any animals or fishes that are residing here.

The fire-related stuff, such as stoves, is not allowed to take in the park.
It is strictly prohibited for the visitors to bring their pets, including dogs in the park. There is an alternative for the dog owners to leave their pet dogs at the kennel present in Zerne.
The overnight parking and camping are prohibited in the park. One can stay in Chamanna Cluozza.
The littering is also prohibited – the visitors have to take the trash out of the Park themselves.

Suggested Read: 10 Magnificent Castles Of Switzerland That Will Make You Feel Like A Time Traveler

Where To Reside In The Swiss National Park?

There is an array of accommodation alternatives available near to or within the Swiss National Park. If you want to reside in the park, there is one of the best options – Chamanna Cluozza (the mountain hut) and Parc Naziunal Il Fuorn Hotel. The Chamanna Cluozza (the mountain hut) is the log cabin which is constructed at the height of 6175ft or 1882 meters in the year 1910. The hotel offers all the basic accommodation needs such as washrooms and toilets, but there is no showers facility. The Chamanna Cluozza usually remains available for tourists from June to mid-October. Moreover, the Parc Naziunal Il Fuorn hotel offers some more human comforts.

Further Read: Behold These 10 Magnificent Switzerland Waterfalls That Will Blow Your Mind For Sure!

One can see chamois, ibexes, marmots, golden eagles, and bearded vultures here in the park. And, there are numerous other Swiss National Park animals as well. Thus, the Swiss National Park is the best alternative for eye-catching and colorful landscapes. If you are searching to spend the most memorable vacay this year in Switzerland, do give this park a thought.