8 Temples In Delhi That You Will Fall In Love With 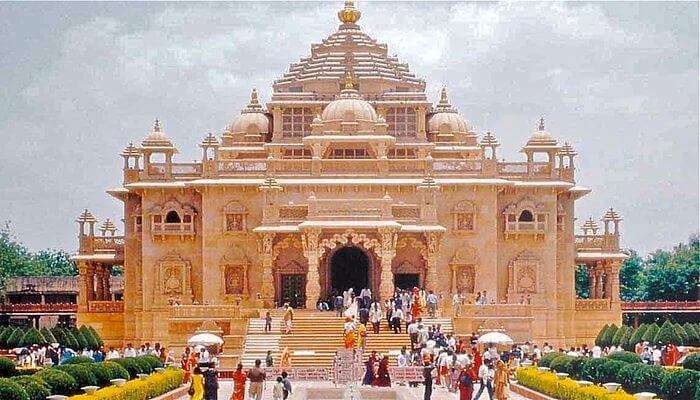 Located in North India, Delhi is known for being the confluence of culture, art, and architecture. Attracting thousands of visitors from home and abroad every year, this city is known for its historical buildings and monuments that are the perfect example of heritage and modernity. Temples in delhi are known for combining elegance and culture. Some of the temples here have stood the test of time as they have even survived a period of demolition.

8 Temples in Delhi That Will Leave You Amazed

Have a look at some of the best temples in Delhi here.

Lotus Temple is one of the famous temples in delhi and started its journey in the year 1986. Built at the cost of $10 million, lotus temple in delhi was constructed for the Baha’i religion. Today this temple i open to all and doesn’t require you to have any specific religious affiliation. This architectural marvel has the ability to accommodate 2500 people today. Lotus temple in delhi stands adorned with 27 marble petals today. Individuals are allowed to sing, chant or pray at the temple.

Must Read: 66 Tourist Places In Delhi In To Witness The Capital City To The Fullest In 2020!

Located in South Delhi, Chhatarpur Temple is dedicated to the Goddess Katyayani and is better known as Shri Aadya Katyayani Shakti Peetham. This temple was built with the exemplary efforts of Sant Shiromani Baba Nagpal. Embellished with Vassar architecture, this temple takes pride in being decorated with latticed stonework. Located in a sprawling campus spread over 60 acres, the temple complex is home to 20 temples. You will find both North and South Indian style architecture here. This is undoubtedly one of the best temples in delhi.

Suggested Read: 50 Hill Stations Near Delhi One Must Visit In 2020 For A Peaceful Getaway!

Being one of the oldest temples, kalkaji mandir in Delhi is also known as the Manokamna Siddha Peetha. Many believe that this temple is one of the five temples built by Pandavas after the Kurukshetra. Being one of the most visited temples, Kalkaji Temple unravels the opportunity for you to relive the history of Satyug. According to the legendary story, the Goddess Durga was manifested in the Kalika Avatar in order to put an end to the Demon Raktabija. Today the kalkaji mandir in delhi stands adorned with pyramidal tower.

Suggested Read: Getting Married? See These 17 Best Locations For A Pre Wedding Shoot In Delhi NCR In 2020

Being one of the famous temples in delhi, Yogmaya Temple is dedicated to the Goddess Yogamaya who is the sister of Krishna. This temple is believed to have been built by the Pandavas. This temple has really stood the test of time as this temple was invaded by armies and dictators at times. The modern temple was reconstructed by Raja Vikramaditya Hemu. You should definitely experience Phool Walon Ki Sair here.

Suggested Read: Best Places To Eat In Delhi: If You’re A Foodie, Then This Is Where You Need To Go In 2020!

Suggested Read: 39 Super Fun Places In Delhi That Make It The Happiest City

Akshardham temple in Delhi is one of the most famous temples that you will find in Delhi. Located near the CommonWealth Games Village on the National Highway 24, the temple is dedicated to Swaminarayan Akshardham. The large complex amidst the garden is the perfect spot to be at when you want to have some peace of mind. Not only will you find yourself amidst rich Indian culture here but also will find the light and sound show to be of immense content. You will not be allowed to carry any phone, bag, or camera inside akshardham temple in delhi.

Being one of the famous temples in Delhi, Hanuman Mandir located at the Connaught Place tops the list of temples that were built during the Mahabharata period. The present temple is said to have been built by Maharaja Jai Singh in 1724. Hundreds of visitors come here every day to worship the Lord Hanuman. The ceiling of the shrine is embellished with images of Lord Rama. Most of the visitors come here on Tuesdays and Saturdays. You will be amazed to know that this temple holds a Guinness Record for continuous chanting of Sri Ram, Jai, Ram, Jai Ram.

Suggested Read: 12 Surreal Places To Visit Near Delhi In November In 2020

Being one of the most visited temples in delhi, Gauri Shankar Temple near the Chandi Chowk Road is one of the most popular temples in Delhi. This temple is believed to be built by a soldier who built it after managing to come back despite an injury. The Shiva Linga here is believed to 800 years old. You will also find paintings of Parvati, Ganesha, Kartik on the walls here. Most of the devotees visit the temple on Mondays. You should definitely experience the Shivratri here to see the incredible decoration here.

Further Read: 61 Incredible Places To Visit Near Delhi In 2020: Within 600 KM From The Capital

Q. What is the famous Temple of Delhi?

A. Bira Mandir is considered to be the most famous temple in Delhi. Located at Connaught Place, this temple is dedicated to Goddess Lakshmi and Lord Vishnu.

A. Akshardham Temple in Delhi was built with the help of 11,000 artisans and volunteers of Bochasanwasi Shri Akshar Purushottam Swaminarayan Sanstha (BAPS). Built it five years, this temple received blessings of HDH Pramukh Swami Maharaj.

Q. Where can I roam in Delhi?

Visit These 8 Temples In Rameshwaram For A Spiritual Getaway In 2020!

Delhi In March 2020: A Little Guide To Fall In Love With The City All Over Again