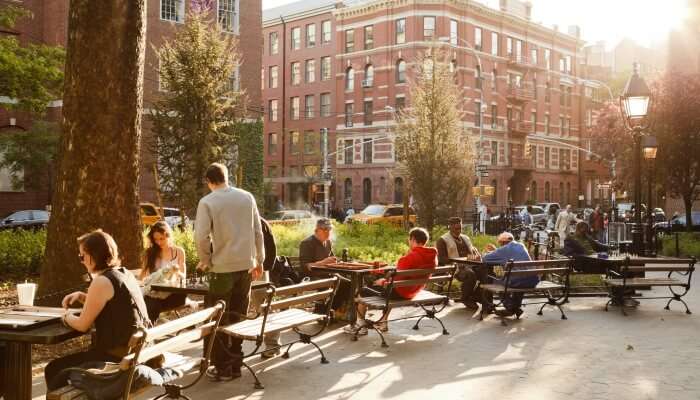 Often referred as Village, Greenwich is an Urban Area in the New York City which is bordered by the 6th Avenue (West village) on the west, the 4th Avenue (East Village) on the east, Houston Avenue (SoHo) on the south and Chelsea and the 14th Street to the North. The unique thing about this place is that there are no skyscrapers but big apartment blocks and a laid back street lined with some of the most innovative cafes and restaurants serving delicious delicacies. There are plenty of things to do in Greenwich village. Here’s a few of them.

14 Interesting things to do in the Greenwich Village

Get an opportunity to take the tour of the world famous apartments where arguably the best sitcom drama ever broadcasted on Ttlevision was produced. Here, you won’t find Central Perk but what you’ll find instead is The Little Owl Restaurant. The only thing you’ll wonder while on the tour of this truly iconic place is how the heck could such broke people live in such an expensive part of the town, but that’s Hollywood for you ladies and gentlemen and anything can happen in Hollywood Productions! This is perhaps one of the best things to do in Greenwich Village this Weekend.

Must Read: Haunted Places In United Kingdom: 10 Places That Will Spook The Life Out Of You

2. Greenwich: Dine at a local Café

Drink coffee, read books and enjoy with your friends, family or even strangers just like the 90’s. Get away from your busy life and embrace the café culture as it should be embraced, in a laid back fashion. Forget about your mobile phones, internet and social media life and have a quality time of your life which you’ll remember throughout your life. It will be like any relaxing holiday experience should be.

You can also call it Freedom Park. The Washington Square Park has seen numerous protest over the years for issues ranging from equality to the freedom of press to the gay rights movement and the protests against wars by the music community. Take a stroll and experience what makes the country really great. Walk through this iconic park, which has made a significant contribution to the history of Greenwich Village as well as to the history of the city and the country.

Suggested Read: 10 Museums In United Kingdom To Experience The Beauty Of Art, History, And Culture At Its Best!

4. Greenwich: Take a tour of former houses of the best known poets

Take a tour of the former houses of some of the best known poets that ever lived in the area and the city. Visit the house of Edgar Allen Poe, Edna St. Vincent, EE Cummings and Marianne Moore as you stroll through the remains of the self-awareness era and its patrons. Give yourself the experience of a lifetime while you wander on the streets in the Greenwich Village. This is a must-do thing in Greenwich Village in the weekend.

The artist Gertrude Vanderbilt Whitney purchased the current building in 1907 and the surrounding buildings in the subsequent years and laid the foundation of Whitney Galleries and the subsequent Whitney Museum of American Arts. In 1964, The New York Studio School opened to cater to the needs of the budding artists in need of traditional art education. Today, the same school runs programs including excellent lecture series inviting some of the best contemporary artists and critics to deliver the classes.

Explore the heart of the oldest living Italian-American community whose roots date back even before the American Civil War. Get a taste of some of the best Italian Cuisine available anywhere in the country and shop in Italian shops. Furthermore, get yourself the best stitched Italian suits you’ll ever find in the city. You can include this among the most interesting things to do in the Greenwich Village.

Considered as a turning point in the workers’ rights movement in the 20th Century, a fire at the top floor of the sweets factory quickly engulfed the whole building and killed 146 mostly immigrant low wage working women in UK. This proved to a point of protest for the worker rights and started a movement for the recognition of unions and rights of workers all across the country.

Suggested Read: 10 Free Things To Do In London In 2022 We Bet You Never Knew!

If you have a thing for the independent and parallel cinema, watch the regular screenings happening at the IFC center. There are often special programs such as the Weekend Classics starting from 11 am on Friday to Sunday or catch the cult classics at the Wavely Nights program that happens on the nights of Fridays and Saturdays. Make sure to check online first for screenings.

MacDougal Street is the best known street for food lovers. It is loaded with cafes, bars and restaurants for you to try. This is literally a food lover’s heaven, take a walk through the street and try some of the best delicacies available in all of Greenwich Village and New York City. This can be done anywhere at any time so it is amongst the things to do in Greenwich Village tonight also.

Enjoy some of the best Jazz Music available in the New York City at the Fat Cat in Greenwich village. It is equipped with pool tables and ping-pong tables, shuffleboards and more. Fat Cat provides a great atmosphere to meet up, have drinks and play games with your friends. This is among the best things to do in Greenwich Village at night.

Greenwich Village itself enjoys a long heritage of local theatre since the time of the days of the Provincetown Playhouse in Eugene O’ Neill’s era. There have also been a few long running productions such as The Fanatsticks which used to play at the Sullivan Street Playhouse and the ever so acclaimed revival of Our Town at the Barrow Street Theatre. Spend your day watching some of the best off broadway theatre in the small alleys of the Greenwich Village and appreciate some off the mainstream theatrical plays.

Suggested Read: 10 Castles In United Kingdom Which Reflect The Charismatic Heritage Of The Country!

The multimedia arts venue promotes experimental performances, this place promotes innovation and experiment and some kind of a hub of innovation when it comes to performing arts inside the Greenwich. Witnessing a performance at this place is not a bad idea and can be added to the list of the best things to do in Greenwich Village. Make sure to check online for performances.

Pay your respects at one of the most important monuments in the contemprory history of the United States of America. The Gay Liberation Monument is located at 51-53 Christopher Street and is positioned in a park in the Christopher Street. The sculptures here commemorate some historical moments that happened just across the street at the Stonewall Inn. The police raided the first fully gay friendly place in 1969 and what followed was an intense firefight with the police which ultimately resulted in the Gay Rights Movement coming alive. The monument was erected in 1992 and has since been an important part of the contemporary US history.

Suggested Read: 15 Vibrant Festivals In United Kingdom In 2022 That Are Rejoiced With Ultimate Splendor

14. Elk: Enjoy a delicious cup of coffee and breakfast

Enjoy some of the best prepared coffee as well as breakfast at the Elk coffee house and general store. Known as one of the top destinations to enjoy a quick breakfast, the EIK has a long menu for both Breakfast as well as lunch. The EIK is known for providing comfortable space to all its customers with computer free tables exclusively made for holding conversations and reading just like the old times. Take your close loved ones to this place to enjoy some moments worth savoring.

Greenwich Village is a unique place within the New York City, having a subculture of its own. Be it the home of the iconic apartments that from the TV show friends or the off-Broadway shows, there are loads of things to do in Greenwich Village for first time tourists. Don’t miss the interesting things that this place has to offer on your trip to UK.

Frequently Asked Questions About Things To Do In Greenwich Village

What is there to do in Greenwich Village NY?

There are many things to do in Greenwich village. It offers great food and drinks. You can explore the streets like Bleecker street which is a hub for great artistic activities.

What is Greenwich Village known for?

Greenwich village is beautiful neighbourhood in New York city. It played an important role in American Bohemia movement and thus it has been offering artistic display.

Is Greenwich Village safe to visit?

Yes, Greenwich village is very safe to visit. Not only during the day, but you can also go out at night.

How far is Greenwich Village from Chelsea?

Greenwich village is located at a distance of 1 miles from Chelsea.

How far is Greenwich from NYC?

Greenwich is located at a distance of 35 miles from NYC. It takes 45 minutes to reach New York from Greenwich.

Are Greenwich Village and West Village the same?

Is Greenwich village safe at night?

Yes, Greenwich village is safe at night. There are many bars and restaurants in the neighbourhood due to which it usually remains crowded even during the night.

Is Greenwich village a good place to live?

Yes, Greenwich village is one of the best places to live in New York. It offers markets, lit streets, restaurants and more.