Haunted Places In United Kingdom: 10 Places That Will Spook The Life Out Of You 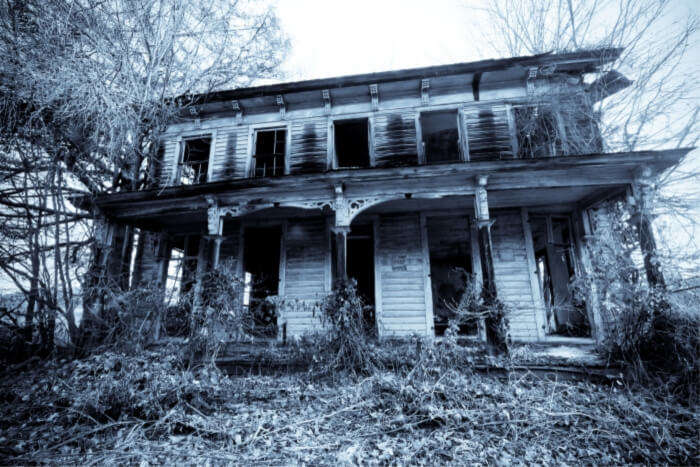 10 Most Spooky And Haunted Places In United Kingdom

There is something insidious lurking in some streets of the United Kingdom that hold centuries-old spooky incidents. Here are the top 10 haunted places in United Kingdom which are some of the scariest locales in the whole of United Kingdom.

Pendle Hill is well-known among the locals as one of the scariest places in the United Kingdom. It is known to be the abode of Twelve vicious Pendle witches who were hanged to death in the year 1612 at the Lancaster Castle. The bodies of these witches were buried in Pendle Hill and ever since that day, this place is said to be haunted by the ghosts of these witches. It is located in a spooky locale overlooking the Newchurch village. During the day of Halloween, many inquisitive ghost hunters and other locals climb up this hill to witness ghost activities.

Must Read: 10 Places To Visit In United Kingdom That’ll Make Your Trip More Classic That You Had Imagined

This place was formerly a glorious Victorian mansion located in the tranquil village of Borley. In the year 1939, a massive fire destroyed this beautiful mansion and since then many unexplained activities in and around the mansion have been reported by all the locals residing in this village. This became well known worldwide as one of the most haunted places in England United Kingdom after it was featured in the Daily Mirror where Harry Price who is a famous paranormal activity investigator reported his findings after visiting this mansion. The first ever paranormal activity which was reported in this mansion was in the 1860s when footsteps were heard inside the mansion. Other unexplained and scary things witnessed here include two headless horsemen, a ghost of a nun, a ringing of the servant’s bell, phantom carriage, bottle throwing, among others.

This village has been reported as one of the most haunted places in United Kingdom. More than a dozen ghosts haunt this village. Some of the Ghoulish attractions in this village include the Screaming Woods where it is rumored that the spine-chilling cries of the dead are heard, the Fright Corner where a man on the highway had an untimely death, among many others. This village experiences a lot of ghost hunters throughout the year who come with an intention of investigating and reporting if the village is actually haunted or not.

Suggested Read: 10 Top Things To Do In United Kingdom For A Fun-Filled Holiday Experience

Many party enthusiasts would have heard of this popular pub in London. But, not many would know that this pub has a scary history attached to it. This pub is one of the oldest pubs in the region which was built in the year 1663 and has seen many dark sides. Many visitors have reported that they have stumbled upon a ghost in cavalier uniform and also witnessed an old barmaid who had hung herself long back in this pub’s basement. One truly can’t say if these stories are true or not, but since it is one of the oldest pubs in theUnited Kingdom, it sure has been a place where many mishaps have occurred.

Hampton Court Palace is more than 500 years old, it is but obvious that this historical building has been the site of many mysterious happenings in the past which has given rise to the ghosts and ghouls inside this building. Catherine Howard, who was one of King Henry’s wives is said to have been kept on a house arrest in Hampton Court palace long ago. After that, she was executed and since then it is rumored that many visitors have witnessed her ghost dressed in white walking along the halls and shrieking. The other wife of King Henry, Jane Seymour, died while giving birth to their child and after this King Henry ordered for her heart to be buried under the Altar. Since this time many people have seen her ghost walking in the corridors with a candle in her hand.

Suggested Read: 10 National Parks In United Kingdom That Will Bring You Closer To Nature

This is a mansion in Gloucestershire which was left incomplete halfway through its construction. From the outside, this gothic mansion looks completely beautiful and in a full finished form but when one goes inside, it can be seen that several rooms, flooring, and plasters on the wall are missing. Over the years it has earned the reputation of being the most haunted location in the area and many locals and visitors have reported unexplained and scary sightings which include a tall man at the chapel, a ghost inhabiting the cellar, and much more.

Tower of London is an impressive imposing stone fortress in the well-known area in London. It has been the home of several royal families and other celebrated souls who have lived and died here within the grey walls of the building. Thomas Becket is a person who resided in this tower and it has been reported that his ghost has been seen wandering inside this tower. In the year 1483, there were a few people who were murdered here including Richard of Shrewsbury, Edward V, and a young princess, even the ghosts of these people have been sighted. In the year 1536, Anne Boleyn was beheaded here and six years after this Catherine Howard was executed, this tower is haunted by their ghosts as well.

Suggested Read: 10 Best Places To Visit In Manchester For A Great English Holiday

This tunnel was made operational in the year 1902. This is a famous tunnel which runs under the River Thames and wonderfully connects the Isle of Dogs to Greenwich. It is a damp and narrow path and the whole feel and vibe of this tunnel are very spooky and scary. One can witness the ghost of a Victorian woman and man who keep strolling through this tunnel. Nobody is quite sure as to who this couple is but they have been sighted many times in this tunnel during late evenings and night time. Their footsteps can be heard in this leaking tunnel many times.

Nobody quite knows what went down with this once beautiful and famous castle. Even now by seeing what’s left of the castle one can imagine how architecturally beautiful this castle once was. Even though it looks splendid, there is something very unsettling about this castle and every person who has visited here has felt it. There is just one cafe located nearby and other than that this castle and the premise around it remains scarily empty. It is rumored that a Blue Coloured ghost of a Lady lures many passersby and visitors into the ruined castle and ultimately that lured in person dies. Another lady has been said to be imprisoned in this castle and her ghost has been sighted many times around this place.

This eerie haunted place is located in the peaceful location of Dorset and is reported to being the most haunted locations in United Kingdom. The great chamber accommodated by this house is haunted by two duellists and it was once reported that a female visitor who came to check out this haunted site encountered this pair of duellists who interrupted her by fighting. A series of tapping sounds and noises have been heard from the wine cellar of this house as well. A grey lady ghost has also been seen roaming around the through the many areas of Athelhampton House. On visiting this place one can hear a constant unexplained foot tapping sound on the floorboard as well which is pretty scary.

These haunted places in United Kingdom are not for the faint-hearted. Even when you plan a trip to the United Kingdom and you will have to set aside a considerable amount of time to explore all of these places. What is more, you can sate your horror thrills while going on a vacation as well!

Cricket Stadiums In England: 10 Architectural Masterpieces To Visit In 2021

London In March 2021: All You Need To Know About The Square Mile In Spring

Experience Nightlife In Scotland At These 7 Amazing Spots As You Unleash Your Party Animal!

10 Restaurants In Scotland To Explore For A Delectable Taste Of Tradition!

10 Lakes in Scotland That Are Perfect For A Surreal Vacation