10 Best Things To Do In Lyon That’ll Make Your Trip To France Super Special! 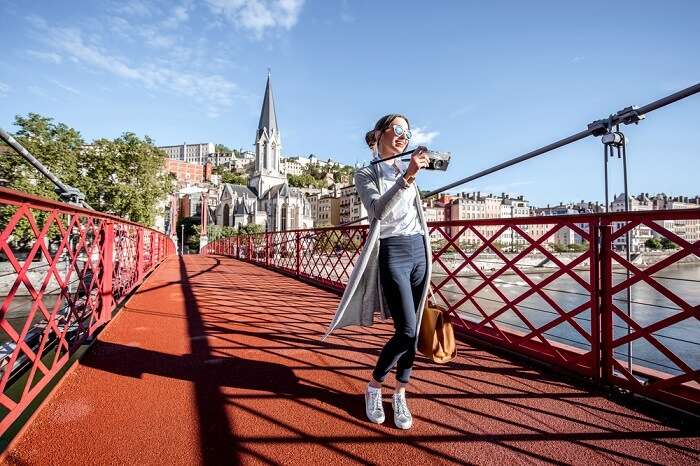 If the city of Paris is a haven for the romantics, the city of Lyon is a paradise for the culture vultures and foodies alike. But it isn’t just this reason that makes it the most important holiday destination in France after Paris, rather it is the things to do in Lyon that reflect upon the rich culture and experiences that this city upholds.

So, if you’re planning to visit France anytime soon and are perplexed about what to do in Lyon even after including it in your itinerary, worry not because we’ve got you covered!

10 Must-Have Experiences In Lyon For A Surreal Affair

Here’s a list of the 10 best things to do in the city of Lyon that’ll not only make you fall in love with it but also add stars to your holiday experience in France. Take a look!

In the past, these Traboules were a shortcut for the silk traders, but now they are a continuous path open for tourists to explore, making it one of the best things to do in Lyon. Unleash the Hercules Poirot within and stroll through these Traboules that’ll tell you the tales of the past. Though there are about 400 of them, only 40 are open for the public.

Suggested Read: Top 6 Things To Do In France That May Sound Cliché But Are Totally Inevitable

The place is fondly known as the Renaissance district of Lyon. Roaming around the district and looking at the past uncover itself with its brilliant architecture is among the best things to do in Lyon in October. The mesmerizing beauty of the structures and the refreshing aura here will definitely leave you enchanted.

3. Enjoy cruising along the river Rhone

Take a cruise around the mauve shades of nature and the pristine etiquettes of the vintage marvels from the past. The river Rhone offers plenty of activities to do in Lyon to ease yourself from the hardships of monotony like the lavender sights, the dining or the wine cruise.

4. Shop at the Croix Rousse, the open-air food market

Shopping in Lyon can be best experienced in the Croix Rousse if you’re looking for the local produces. Hundreds of vendors come here to sell their produce, poultry, and even cooked dishes which are ready to be eaten. It is indeed one of the most comforting things to do in Lyon in winter.

No list of top ten things to do in Lyon can ever be complete without mentioning the summer festival in Lyon. This festival includes theatre, music, dance, circus, and movie presentations in an auditorium in the Theatre antique de Fourviere. Also, thousands of people come together every year to enjoy the festivities.

This is a large urban park where you can indulge in a number of activities like boating, relaxing, going on a picnic, enjoying lunch, or the other sports and recreational facilities. The wooden bridge, the view of the war memorial, the lake, the botanical garden, and more make it an intriguing place.

The museum is among the most unique places and a visit here is a must-do among all the things to do in Lyon. It houses around 100 miniature sets and stills from the movies. The speciality is that many world renowned miniaturists have tried making it hyperreal with the best of effects, which means every time you see it, your mind will be tricked to believe it to be life-size.

8. Witness the marvelousness of Lyon’s murals

Murals can be considered the elder companion of the graffitis of Columbia. Murals are just very long tales on walls, rather than a painting. Murals were an effort by the students who wanted art to be within the reach of common people and their daily lives instead of being confined by the walls of museums and galleries.

9. Take a bite or more of the Lyonnaise Cuisine

Lyon is lovingly cited as the food capital of France. Tasting the delicacies here is in everyone’s list of things to do in Lyon, so you shouldn’t miss it either. The pork dishes, especially are amazingly delicious. Also, Pistachio sausage and Cervelle de canut are served the best here.

Suggested Read: 10 National Parks In France For The Perfect Escapade Into The Wilderness

The best part of this aquarium other than the fishes is its location. It is situated quite near to the confluence of the Rhone and Saone river. Around 5,000 animals of 300 species are put into display here. You can spot sharks, rays, shipwrecks, and octopuses here.

Lyon is a confluence of the classic French couture and the best vintage cuisine. There are many things to do in Lyon, but the most significant ones are those which match your taste. So, don’t forget to pick the best ones from the list and add them to your Europe holiday package for an impeccable affair in France!

Frequently Asked Questions About Things To Do In Lyon

What is there to do in Lyon?

From relishing delicious food to explore top attractions, there are a lot of things to do in Lyon. Apart from indulging in common activities, you can also attend some of the festivals like Nuits de Fourvière.

What is Lyon famous for?

Now famous as the capital of gastronomy, Lyon was the hub of silk and held an important place in history. It is now a UNESCO World Heritage Site, which is why it is present in nearly every traveler’s bucket list.

What can you do in Lyon in one day?

You can explore some of the top places in Lyon that hold historical importance. The name of such places is Vieux Lyon, Traboules, Fourvière Basilica, and Parc de la Tête d’Or.

What should I not miss in Lyon?

Whatever you do in Lyon, do not forget to explore Vieux Lyon and Cathédrale Saint-Jean-Baptiste as these are the best places to visit in the city of France.

Is Lyon safe for tourists?

Overall, Lyon is a safe place for tourists to visit as the police force is quite active. However, one must stay alert to avoid pickpockets and avoid shady areas at night.

What food is Lyon famous for?

Lyon is one of the places in France where one can relish some rustic food like smokey pork sausage served with cream sauce or a dollop of mashed potatoes.

What is there to do in Lyon in 2 days?

The list of tourist places is not short for a city like Lyon and one can explore umpteen spots like Central Place Bellecour, Sun King statue, Renaissance Vieux Lyon buildings, Saint-Jean Cathedral, and many more.