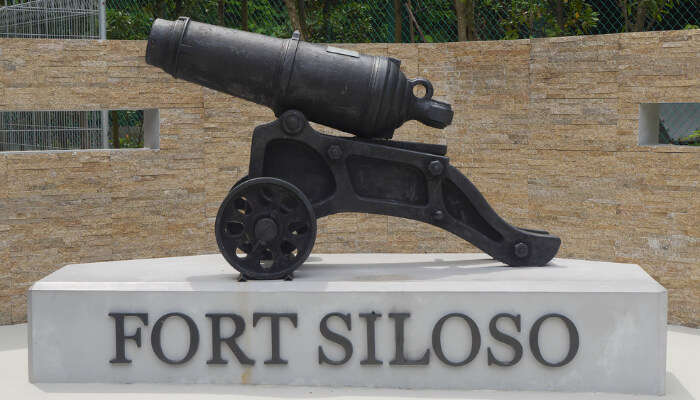 Fort Siloso is a museum located on the Sentosa Island of Singapore. This is the last coastal gun battery that was installed as a defense weapon along with 11 other such gun batteries at the beginning of World War II. This museum preserves many old gun shells and other weapons. It is open to the public to make you visit it and also indulge in other interesting things to do near Fort Siloso Singapore.

At the beginning of World War II, there 12 coastal gun batteries that together constituted the “Fortress Singapore”. And Fort Siloso is the only coastal gun battery that is left and is restored. This fort was built in the year 1874. Fort Siloso is located on Sentosa which is a popular island on the south of the mainland of Singapore. Sentosa Island at that time was called Pulau Blakang Mati. Fort Siloso has now been converted into a military museum which is open to the public. During the time of Japanese Occupation, this fort was converted into a Prisoner of War camp. In June 2017, the Surrender Chambers located inside the fort were reopened with an exhibition and free entry.

The term ‘Siloso’ has been derived from a word in the Malayan language which means ‘rock’. This name suggests to the huge rock that was there at the mouth of the harbour of Singapore. This rock was a danger and an obstacle to the ships passing near the harbour. In 1869, the Suez Canal was opened, that lead to the flourishment and expansion of trade in Singapore. And because of this reason, the need to protect the port of the country became all the more important and urgent. Major Edward Lake from the British Royal Engineers – a corporation of the British Army, prepared and presented a report on the same.

Based on this report, it was decided that a fort will be built on Pulau Blakang Mati in 1874 for protecting the Keppel Harbour of Singapore. To implement the plan of fortification of the Harbour, the top of Mount Siloso was blown off to make it flattened. This was done to enable the installation of coastal-artillery gun platforms. By the year 1880s, a large number of gun batteries were installed on Mount Siloso and Mount Serapong that were kept facing the north, towards Singapore’s mainland and on Sentosa island’s coast on the north. This was basically located on the Pulau Blakang Mati which came to be a strong base for British naval defense forces in Singapore.

By the 1880s Fort Siloso had acquired 7-inch guns and two 64-pounder guns that were automatically operated. An underground electric-powerhouse was the source of energy to this automatic system. In the 1890s, five 10-inch guns were added to the fort’s defense system. Again, in the 1930s, due to the war atmosphere, more weapons were added to the lot. This included twin 6-pounder guns, 5 large searchlights, Quick-Firing anti-torpedo-boat guns, 2 machine-gun nests and 2 twin-Lewis anti-aircraft machine guns. An Operational Tower was also added to control and give the overall command.

3 Things To Do Near Fort Siloso Singapore

Here are some of the most interesting things to do near Fort Siloso Singapore:

If you are a food lover, then go for having Suntec City food in the awesome cafes and restaurants. There are places where you can have the best breakfast for dinner, anything. So, if you have a plan to roam around the city, you need to charge yourself up well.

Read More: All You Need To Know About The Amazing Suntec City For Your Next Singaporean Vacay!

If you ever come to Kallang, make sure you get to know more about the sporting history of Singapore, as Kallang is its birthplace. It shelters a Singapore sports museum where you can head over to know about the lives of sports heroes like Ang Peng Siong and footballer Fandi Ahmad, who have been felicitated with the Hall of Fame in the past.

You get to see the artifacts of old Malaysia Cup tickets and Ang’s swimming trunks. You can also participate in the interactive displays and watch old footage of matches. So, whenever you come to Kallang, make sure that you visit the sport museum because this is exactly what Kallang is known for- its rich sports culture!

Read More: 12 Things To Do In Kallang For A One Of A Kind Singapore Tour

Guided tours in the Fort Canning Park vary depending on the timings. As the park glimmers in the night, some special events are organised in the night. The heritage tours and night walks are intriguing as well as highly appealing. Make sure to pursue this activity when you visit this famous park in Singapore.

Any remains related to the two historical World Wars are interesting and engaging. Would you like to visit this museum in Sentosa Island that was a defense base for British forces in Singapore and preserves the old bombshells and gun batteries? Plan a trip to Singapore and visit Fort Siloso for a date with history.