An All Inclusive Guide To Whale Watching In Mirissa 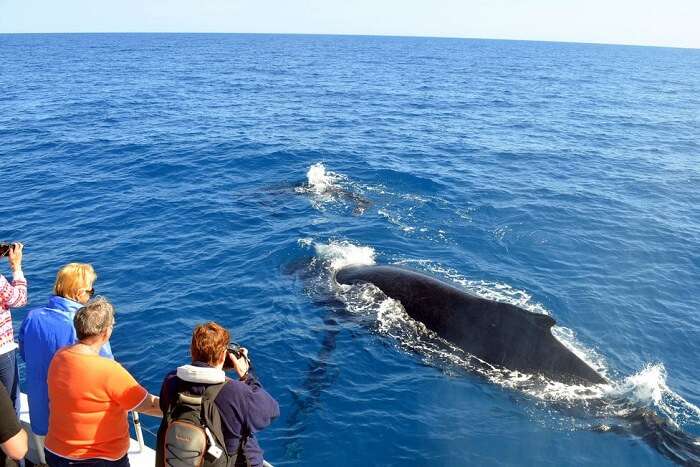 If you’re planning on visiting Sri Lanka, then make sure you go blue whale watching in Mirissa. Mirissa is a small fishing town located in the southern part of Sri Lanka known for its beautiful beaches, food and whale watching. It is known to be the home to the gentle giants of the ocean. If you enjoy water activities and nature, then this place is just perfect for you.

You can reach Mirissa from the Colombo Airport by cab, bus or train. But, we would suggest taking a cab to the small town as it would be more comfortable after a long flight to Sri Lanka:

By Bus: Bus tickets are easily available at the Katunayake Airport Bus Station and they frequent every 30 minutes. You can take the Bus no. 187 or Exo3 to Fort Station. It takes 4-5 hours to reach Mirissa. The bus ticket fees is INR 46/-.

Must Read: Best Villas In Mirissa To Soak In A Mesmerising Sri Lankan Holiday Like Never Before!

November to April is the best time for whale watching in Mirissa, Sri Lanka. The ocean is serene and calm during these months. The weather is simply perfect during these months, and you can unknowingly lose track of time because there’s just so much to do in Mirissa, Sri Lanka. May to October is considered to be off season, and you can rarely spot any whales.

Suggested Read: Everything You Want To Know About Scuba Diving In Mirissa

We’ve compiled a list of the top whale watching tours in Mirissa, Sri Lanka, which will definitely leave you in awe while you spot whales, dolphins and turtles in their natural habitat:

Suggested Read: The Complete Guide To Mirissa Shopping: What To Shop And Where

It is best to book your tour tickets in advance online or buy them directly from their office. Their whale watching tours are preferred by tourists for leaving with them a lifetime of memories of the gentle giants of the ocean in Mirissa. The whale watching tour in Mirissa also give you a chance to explore the marine life which includes the infamous Blue Whale.

Raja & the Whales will offer you the chance to see the Sperm Whale, Fin Whale, Pygmy Whale, Bride Whale and Killer Whale, just to name a few. The ocean in Mirissa also features other marine life such as Spinner Dolphins, Bottlenose Dolphins, Green Back Turtle and much more. Make sure you dont swim in the rainy season, as the ocean becomes really rough during the monsoon season.

Further Read: 7 Places To Go To To Enjoy The Nightlife In Mirissa

This tropical paradise has many sandy beaches that make it the most ideal place for you to spend a few days in the small town of Mirissa, Sri Lanka exploring the ocean and its thriving marine life. So don’t miss this once in a lifetime opportunity to go best whale watching in Mirissa during your trip to Sri Lanka. Come and take back amazing memories of the ocean’s gentle giants.

Q. When can you see whales in Sri Lanka?

Q. What should I wear for whale watching?

A. If you are going for whale watching in the sea, it is good to wear layers, and something that is waterproof. Flat shoes are recommended that are slip resistant. Also carry a cap or a hat, sunscreen and sunglasses.

Q. Which is the best place to see blue whales?

A. Some of the best places in the world to see blue whales are:

Snorkeling In Hikkaduwa: To Enliven Your Senses Amid The Crystal Blue Waters Of Sri Lanka In 2021!