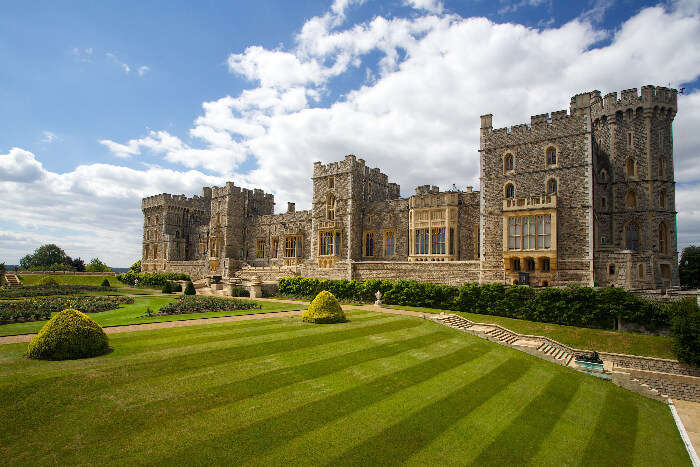 Located in the English county, Berkshire, Windsor Castle is the family home to British lords and rulers. The Conqueror William established it in the eleventh century. Windsor Castle history dates back for more than 1,000 years, and it has been the home of 39 rulers. Covering an area of 5 hectares, it is the biggest and the oldest Castle on the planet.

The commanding towers of the Windsor Castle appear large from every corner of the town, making it one of the world’s most breathtaking horizons. It has been preserved from centuries that make it flawless and completely working. What strikes is that there are around 150 individuals for whom Windsor Castle is their home; the Queen herself resides in it at the ends of the week.

Windsor Castle has two courtyards: the Upper and the Lower Ward, with the passageway through the great Henry VIII’s Gate, built in 1511. The Windsor castle location can be found while exiting from Windsor and Eton Riverside or Eton Central Station. You can quickly locate the castle walls from a considerable distance. At the highest point of Castle Hill, you can find the main entrance of the castle.

Who Lives In Windsor Castle?

Windsor Castle in the English countryside of Berkshire is the official residence of the Queen of England. Home to the royal family for past 900 years, it is the world’s largest occupied castle. The Queen of England uses it as a private residence every year during the months of Easter i.e. March-April. Many official and presitigious guests of Queen are also hosted at Windsor Castle.

Windsor Castle London is busiest as soon as it opens and during the morning. For the best experience, you should book Windsor castle tickets in advance and make sure to reach on your visit date after late morning. The ticketing system of the castle includes concessions for kids, seniors and family tickets. The detailed structure of is listed below:

How To Reach Windsor Castle?

You can reach the castle by bus, train or car. The Eton Riverside and Eton Central Station are the two main railway stations to reach there. A daily bus service “Green Line 702” also operates from Green Line Coach Station near Victoria station. In case you are traveling by car, you can follow the Windsor castle map on Google maps to reach on time but it is always preferred to take public cars rather than visitor car as there is no car parking available at the castle.

Top Attractions At The Windsor Castle

No trek to Windsor could be finished without a visit to astonishing Windsor Castle. Windsor castle in London offers something for everybody, and with such a large number of regions to explore. You can plan a two to three hours visit to see everything related to the castle.

St George’s Chapel inside the grounds of Windsor Castle is one of the best precedents of Gothic engineering in England. Inside the Chapel are the tombs of 10 rulers, including Henry VIII and his third spouse Jane Seymour, and Charles I. The house of prayer is the profound home of the Order of the Garter: Established by Edward III in 1348, today there are 24 knights picked in acknowledgment of their work for the country by the Queen. The wedding of Prince Harry and Meghan Markle was also held at St George’s Chapel. When visiting ensure you gaze upward and watch out for the stone roof, which was included by Henry VII.

Timings: Monday to Saturday: 10 am to 4 pm, Sunday: Closed

The State Apartments are the fabulous arrangement of rooms shaping the highlight of the Castle. Charles II set out to compete with the accomplishments of his cousin, Louis XIV, at Versailles in France. In the seventeenth century, he modernized the Castle’s insides, which turned into the most terrific State Apartments in England, with carvings by Grinling Gibbons and the painted roofs by Antonio Verrio. The State Apartments are outfitted with the absolute best masterpieces from the Royal Collection, including works of art by Van Dyck, Holbein, and Rubens. Vast numbers of the gems are still in the memorable settings for which they were first gathered or appointed by the lords and rulers who have inhabited Windsor.

Timings: The State Apartments are open when the Castle is open, with a couple of exemptions when official State occasions are occurring. Check the terminations ahead of time of your visit.

The Rooms is another suite of private rooms on the sunnier east and south sides of the Castle, including the eminent Crimson Drawing Room. This was George IV’s last and most noteworthy commission, and a standout amongst the most detailed and costly inside beautification conspires ever completed in England. The Queen utilises these amazingly beautiful spaces for official work. George IV authorised the rooms, which are a case of the entire best late-Georgian insides in the nation. A fire in 1992 immensely harmed a few places, including the glorious Crimson Drawing Room. Firefighters utilised 4,000 gallons of water to control the blast. The rooms have since been carefully re-established to its unique brilliance employing George IV’s unique plans.

Suggested Read: 10 Historic Churches In London That You Must Not Miss On Your UK Tour In 2022

It is a well-known event of Windsor castle presenting a fantastic scene of a British ceremony with a military purpose. In a significant show of sounds and colours, the new Guards, driven by a Regimental Band, walk from the military enclosure through the town to outside the Guard Room. Amid the 45-minute service, the handover of obligations happens, including changeover of the sentries. The benefit of guarding the ruler generally has a place with the Household Troops, otherwise called ‘the Guards’, who have done this obligation since 1660.

Timings: The function, for the most part, happens at 11 am on Mondays, Wednesdays, Fridays and Saturdays, however, check before visiting.

It is a mystic doll house worked for Queen Mary by eminent designer Edwin Lutyens and loaded up with small fortunes, made by the leading specialists and artisans of the time. It is an ideal replica of a great home, with electricity, hot and fresh water and lifts. A featuring highlight is the library of 700 small books, making a fantastic depiction of the aesthetic and social existence of the 1920s with contemporary artisans and scholars all adding to the library.

Timings: Closed due to some future projects.

Suggested Read: Christmas In London 2022: Top 10 Experiences For A Lively Celebration Like Never Before!

At a certain point the Grand Reception Room with its crystal fixtures and plating was utilised as the primary assembly hall in the Castle. Maybe the most striking piece in plain view is the substantial malachite urn, exhibited to Queen Victoria by Tsar Nicholas I in 1839, and one of the most significant models outside Russia. Checking out the gold-secured dividers and roofs it is difficult to trust that this room was so immensely harmed in the fire of 1992. The place was meticulously fixed to its previous wonder, which you can see today.

Timings: The reception room is open when the Castle is open

Further Read: 22 Places To Visit In Nuwara Eliya In 2022: The Mini London Of Sri Lanka!

It is recommended to visit their official website before planning a trip at this beautiful place as Windsor Castle has numerous occasions, shows and events throughout the year. Regardless of whether you want to watch the celebrations and service of the Royal Wedding, or extravagant looking at the sights or in case you are merely going for a day trip, follow the above guide to make your vacation in London memorable.

Is Windsor Castle the largest castle in England?

Yes, Windsor Castle is the largest castle in England.

What is the entrance fee to Windsor Castle?

London Shopping 2022: 15 Best Places To Help You Glam Up Your Wardrobe & Home!

Christmas In London 2022: Top 10 Experiences For A Lively Celebration Like Never Before!

10 Exquisite Places To Party On New Year In London And Welcome 2022 With A Bash!

10 Best Indian Restaurants In London That Will Awaken The Gastronome In You!