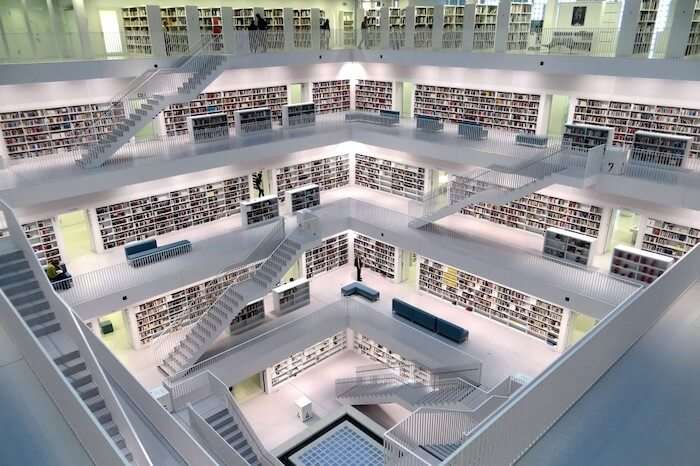 The first libraries in the world were collections of texts written on clay tablets. Some of these archives discovered in Iraq date back as far as 2600 BC. In the classical period the Library of Alexandria, in Egypt, functioned as a major center for academia. It existed from the 3rd century BC until the Roman conquest of Egypt in 30 BC. Throughout the centuries since, libraries have played an important role in many cities not only as places of places for books but as meeting and study centers. These 7 world’s unusual libraries have been designed to show off the architecture and by extension, the culture of the time they were built in.

From libraries decorated with beautiful frescoes to those ornamented with amazing tiles, stucco work, or carvings, we have shortlisted 7 world’s unusual libraries that would turn even the most recalcitrant readers into bibliophiles:

St. Edmund Hall college is housed in the 12th-century church of St Peter-in-the-East, one of the oldest churches in the city of Oxford. The church was converted into a library in 1970, but the renovation process kept the integrity of the church intact — There is even a crypt below and a graveyard outside, but you won’t find any books there. Outsider access to St. Peter-in-the-East is only allowed during school vacation periods.

Built in 1807, the Boston Athenaeum is among the oldest and most distinguished independent libraries and cultural institutions in the United States. It has one of the most unique library names. It added an art gallery in 1827, began running yearly exhibitions of American and European art, and by the mid-1800s found itself not only at the center of Boston’s culture scene but also one of the largest libraries in the US. It hosts exhibition programs and even concerts.

The Long Room of the Old Library, the most famous spot in Trinity College, is located upstairs from the exhibition room where the Book of Kells is displayed. It is a superb room filled with oak bookcases containing 200,000 of the library’s oldest books that seems to stretch for miles under an arched ceiling. Trinity College’s Old Library might be most famous for housing the Book of Kells.

Suggested Read: 9 Homestays In Ireland Whose Interiors Will Blow Your Mind Away

The Admont Abbey Library, built in 1776 in a seriously overwhelming European Baroque style, is the largest abbey library in the world. Stored below are about 70,000 volumes among limewood carvings by Josef Stammel, intricate columns, and a striking white and gold aesthetic. In 1865, a fire consumed almost the entire monastery, with the exception of the stunning library and its beautiful and rare volumes! It is by far one of the most unusual libraries around the world.

The Library of Congress offers more than 155 million items and the largest rare book collection in North America. The library also houses a copy of the Gutenberg Bible and the world’s smallest book which is about the size of a period. The British set this library on fire in 1814. Fifteen years later, Thomas Jefferson offered up his personal library to replace books that were lost in the fire. It has one of the most unusual library collections in the world.

Suggested Read: 12 Most Luxurious Villas in USA For Your Next Family Vacation In 2021

The Strahov Monastery Library is comprised of three rooms: the Theological Hall, the Philosophical Hall, and the Cabinet of Curiosity, all of which are stunners and contain invaluable volumes. The Cabinet of Curiosities contains books, as well as glass cases displaying natural science collections, including the remains of a Dodo; archeological findings; and military exhibits. It is one of the most interesting libraries in the world.

Suggested Read: 12 Romantic Places In Czech Republic You Must Visit With Your Loved One In 2021

The building’s entrance was inspired by the “Cenotaph for Newton” by Etienne Boullee, though the structure’s interior draws influences from ancient pantheons. This library is not without controversy. Many people have complained that it looks out of place in an otherwise flat, ordinary city. It cost nearly 80 million euro to construct this library. It is one of the most beautiful libraries in the world.

Further Read: 5 Waterfalls In Germany To Witness The Charismatic Beauty Of Nature

Even though ebooks and digital archives have taken over in many places, libraries themselves are still important places for quiet research and reflection. We hope you liked our list of 7 world’s unusual libraries and are dying to book an international trip to visit as many of them as you can. If you have any other suggestions, please let us know in the comments section below!