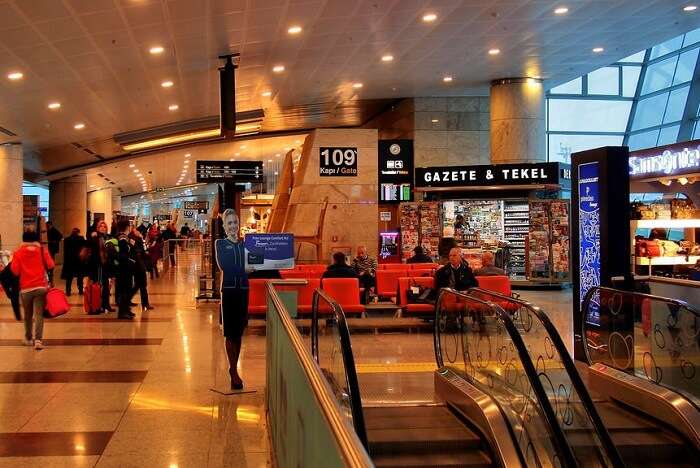 Travelling is an integral part of any vacation. We strongly believe that travelling time should be peaceful for all the travelers, so that they can enjoy their entire span of vacation to the fullest. If your mode of commute is a pain, the entire holiday mood goes down the drain. When you plan your holiday to Turkey, you should keep in mind that you will have the chance to gape at these 13 domestic and international airports in Turkey.

We’ve shortlisted 13 airports which are considered as some of the most important airports in Turkey and hold significant importance in the mode of commute in Turkey. Take a look:

It is one of the largest airports in Turkey. A huge number of passengers use it on a frequent basis. It is the main hub for the Turkish Airlines. The airport houses both domestic and international terminals. The passengers can enjoy airside facilities like shopping, cafes and restaurants. You can shop to your heart’s content and buy some great stuff from the duty free shops here.

Beaches are considered one of the most relaxing and fun locations to spend some time at when you are on holiday. The beaches naturally are a gripping location in Turkey. Therefore, a lot of tourists come to spend time at the beaches of Turkey. This is the exact reason why the Antalya Turkey airport was built. It accommodates the ever increasing number of tourists who visit the Mediterranean beaches of Turkey frequently. Its ideal location makes it very crowded during peak holiday seasons. The airport has one domestic and two international terminals.

There are times when we visit a place and have absolutely no idea about its origins. So let’s start by telling you how this airport got its name. The name of Ankara Esenboğa Airport has an interesting story attached to it. It is named after one of the Turkish warlords who was part of the army of Timur. Apart from an interesting name, the airport has been awarded as the best airport in Europe by ACI Europe. The airport provides service to private and business jets as well.

Suggested Read: Top 5 Mesmerizing Temples In Turkey Which Are Absolutely Worth Visiting On Your Trip!

Trabzon airport services many airlines, like Pegasus Airlines, Kuwait Airways, Air Arabia and Sun Express. Though it is a crowded airport, it receives a setback because of the flight related incidents that have taken place at the airport. The taxis are easily available for commute from the airport. Free wifi is provided for 2 hours to the flight commuters.

The Dalaman is one of the best airports in Turkey which is serviced both for public and military usage. It was initially used as an aerodrome. It operates both domestic and international airlines. It is given the status of the third largest terminal building in Turkey. Out of all the Turkey airports, the Dalaman Airport has got itself placed as the busiest airport in Europe. Though it is crowded most of the time, the facilities provided by the airport makes the waiting time more pleasurable.

The Erzurum airport is situated in the area of Erzurum which is located in eastern Turkey. For the convenience of the passengers, the airport has an open air parking lot which has the capacity of approximately 200 cars. It is a small airport. It runs airlines like Anadolu Jet, Pegasus airlines, Sunexpress and Turkish airlines.

Milas- Bodrum airport is one of the many primary airports of the nation which provides both domestic and international flights to the commuters. It is very crowded during the holiday seasons. All the international travellers are in for a treat. You will be treated with a lounge space which is spacious and has additional seating too.

If you look up Turkey airport map, you will find Sivas airport located at a hill. It was constructed to be used for military purposes. Later, a terminal building was opened to service the civilian air traffic. What is even more interesting is that it is the host to the second longest runway in Turkey. Do include this in your go-to places in Turkey to enjoy the serenity of the hills.

Of the many small airports in Turkey, Gazipasa is a public airport that was built in 1999 but was made functional after many years of its completion. A low cost airline by the name of Transavia is deemed as the first international airline that was operated from this airport. Make sure to visit this airport.

Once again, the name of this airport has a story behind it. It is named after the first female fighter pilot in the world, Sabiha Gökçen. It is one of the most popular international airports in Istanbul Turkey. The airport was built solely because the existing airports couldn’t meet the ever increasing passenger demands. A new terminal building is under construction. The passengers will be able to take advantage of services like hotel, VIP building, food court and cafes.

Islands have a serene and composed vibe which makes them an exciting location. If the idea of islands excite you, then this is the place you should be at to experience island vibes. This airport is made on an artificial island. The Ordu-Giresun Airport is officially the third largest artificial island airport in the world.

It is regarded as Turkey’s first regional airport, though the location is at times criticised. Few of the airlines that provide service here are Eurowings, Germania, Turkish Airlines and SunExpress. It should be on your wish list if you want to visit a picturesque airport. You should definitely visit this airport to gaze at its beauty and grandeur.

The airport provides service for both domestic and international flights from a single terminal. There are plans to link up the airport with the Istanbul Metro service. In the coming years, it is predicted to become the main airport of Istanbul. The airport is located in Istanbul which is regarded as the largest city of Turkey.

It is a regional airport that serves Bodrum. The airport has one asphalt-surface runway that is 1,570m long, and 30m wide, one of the busiest Turkey aiport arrivas.

In the list of airports in Turkey, Adana airport is an international airport located in Adana, Turkey, the airport serves mainly to the Cukurova region, and is lesser extent to the provinces surrounding Cukurova, due to its frequent domestic flight schedule and is on Turkey airports map.

We believe that a holiday should be a memorable experience for everyone. Right from travelling to actually experiencing the place, the entire journey should be enrapturing. There are many airports in Turkey. Whenever you are planning a trip, you should be well versed with the areas, especially the airports and airlines you are going to use. Take a trip to Turkey and share with us your experience at these airports.

What is the main airport in Turkey?

How many airports are there in Turkey?

There are currently 57 airports in Turkey. Of theseairports, 33 offer both domestic and international flights, while 13 offer regional flights across Turkey.

What is the nearest airport to side turkey?

Side is 34 mi from Antalya Airport (Antalya, Turkey).

Is Istanbul airport the biggest in the world?

That will make it the world’s biggest airport by passenger traffic. In comparison, Hartsfield-Jackson International Airport in Atlanta, currently the world’sbusiest airport, handles 107 million passengers a year.

10 Airports In Washington DC Which Will Give You A Flying Experience Like Never Before!