Appalachian Trail: A Complete Guide For Embarking On A Mesmerizing Journey In The USA 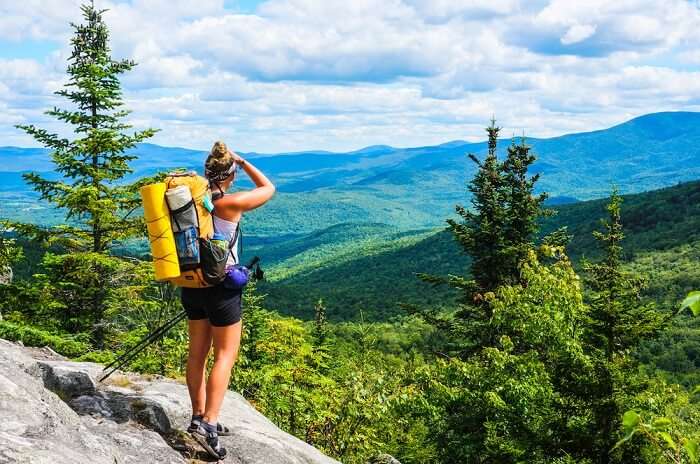 The number of trekking spots in and around the United States is abundant, but, what does stand out from the rest is the Appalachian Trail which is located in the eastern part of the United States. Situated in between the Springer Mountain in Georgia and the Mount Katahdin in Maine, this specific trekking trail is one of the most commonly visited ones by the majority of the trekkers in that route. The best part of this trekking trail is the fact that not every part of the trail is in the wilderness, you get a perfect balance in between the wilderness and the overall towns and crossroads too. There is one unofficial extension which moves on till a part in Canada and is also an amazing spot to visit around in.

In this article, we are going to be discussing every single detail one needs to know when it comes to hiking the Appalachian Trail.

The very first thing that irks the mind of the interested trekkers is the kind of adventure they are set to embark on and whether or not the same is worth the possible strain that one puts around through their journey.

The Appalachian Trail is actually quite a long trekking journey and does cover 14 different states in between. Some of the most common states that you will trek through include Georgia, North Carolina, Virginia, Maryland, Pennsylvania, New York etc. The longest segment of the overall trail goes through Virginia which is what makes it one of the largest trails around the Appalachian Trail. On the other hand, West Virginia, Maryland, as well as Connecticut, make up for the least segments in the trail.

Majority of the time, for the novice or even for the common day to day trekkers, completing the overall Appalachian Trail length takes from somewhere around 5-7 months in total. But, often times, the advanced and experienced trekkers have been found to finish the entire trek within a matter of 50 days which is pretty impressive.

The alarming thing about this specific trek route is the fact that not every person to sets off doing this ends it. It is believed that only 20% of the people in total have been reported to actually end up completing the entire journey.

There are two ways in which one can set off for their trek – one being the Northbound and the other being the Southbound. While the entire route for the overall trek depends on the season and the direction you are going, it is always best suggested to stick to experienced people’s guidance and then follow the route that they mention.

Must Read: 12 Incredible Places To Visit In USA In Summer 2022 For A Magical Journey

Best Experiences On The Appalachian Trail

Before we move forth with the kind of expenses and such, it is important for a trekker to be well aware of the kind of experiences they are about to embark on the Appalachian Trail distance. The very first thing that one needs to know is the fact that the trail is not just located in the wilderness and thus coming face to face with towns is quite common.

Apart from the hundred-mile trek through Maine, which takes around a week or 8 days to complete, you don’t necessarily require any kind of extra food because you can restock in the towns you come across. Majority of the trekkers are witnessed to not take the aid of map and compass because of the fact that the entire road is well mapped out, it is always best to have them in case of emergency.
Encountering animals and reptiles along the way is not common, you might even cross path with a rattlesnake, if something like this happens, be calm and walk away instead of agitating the creature.

If you want to experience complete overall peace of mind during the trek, it is always best suggested to visit during the off-season otherwise the entire trail is overcrowded with people.

Must Read: Niagara Falls in Canada: A Guide To A Majestic Waterfall In North America

As mentioned before, there are two ways one can trek through the Appalachian Trail, one being the Northbounder and the other being the Southbound.

When it comes to pointing out the trip for the Northbounders, it is always best suggested to start the trip in between March and April. Even though this is the peak season to set off in terms of the weather and such, it is also the peak season where the majority of the people start their journeys as well. This ends up making the area quite crowded and might not be the best trekking experience because of the overcrowded area. If you wish to avoid the majority of the crowd, the best time to start is between April 15 and the first week of May. Even though you might be a few days behind, it is actually guaranteed to provide you with a peaceful trek. If you are an experienced trekker, starting in February is an option too.

When it comes to suggesting best dates for a Southbounder, it is best suggested to start during late May or even mid-June. The weather is quite warm and pleasant and if you are on schedule, you will be able to finish the entire trek before the winter arrives which is an added bonus too. This trail is best suggested for the veteran trekkers.

When it comes to the Appalachian Trail guide and the expenses one has to bear for the overall trip, the money is not something that would dig a hole in your bank account. For an overall aspect of spending around 5-7 months hiking through the entire trail, the maximum you would need to spend would range in between $5000-$7000 which is pretty decent.

The entire hiking gear is what costs up to the majority of the money and depending on the quality of the gear, you would have to spend somewhere in between $1000-$2000 for a complete gear set for the hiking trip.

In other words, the entire overall trail expense on a daily basis ranges from 15 to 20 dollars a day and the town expenses will round off to 100 dollars a day or so. If you are on a tight budget, you can plan ahead and cut down on the unnecessary expenses to last you throughout the entire journey.

The best way to save money during the hike is to not stop around in every single town. This is where you will get diverted and ends up spending more than you have. For the best experience, stop at the important towns and get to know more about their culture and traditions.

Suggested Read: Gates Of The Arctic National Park: Explore The Northernmost Park In The States!

As mentioned before, the tips for every hiking trip is more or less generalized. If you want the best experience, it is necessary that you ensure that you know the entire route around.

Hiking through the Appalachian Trail map can sound daunting but the experience is definitely one of a kind. It is best to set on this journey if you have a friend who is willing to do the same with you. This way, you get the motivation to carry on with the entire hike and not give up halfway through. Now you know how to embark on an adventurous journey, so, plan a trip to US and let your spirits go high!