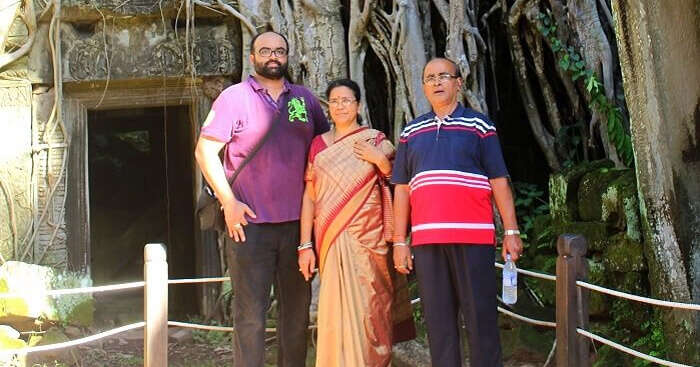 Avijit talks about his rich travel experience in Cambodia. He went on a family trip with his parents and fulfilled their wish of visiting the famous Angkor Wat temple in Cambodia. Describing his experience to be an enchanting one, Avijit tells us about the past history, culture, and architecture of the country that he witnessed live. He booked his family trip package to Cambodia from TravelTriangle and it included his meals, hotels, sightseeing, and transfers all for a cost of INR 94,700. Let us hear their story.

I am 32 years old and work with an MNC. I traveled to Cambodia with my parents who are in their 60s. Taking this trip with them was a special experience since they always wanted to visit the great Angkor Wat temple which was also the largest religious monument in the world.

With a past experience of both domestic and international travel, I have been lucky to see the world and fortunately, I have gained wisdom from my traveling.

Traveling for me is all about opening up to new cultures and the history of places across the globe. It is a mix of unwinding and education, sensitivity for the cultures, traditions, and being a responsible. I believe I am like that for in my heart I have the utmost respect for my hosts and their rules & regulations.

So after our destination was decided, I began my search for suitable travel packages for the same. It was a friend of mine who recommended me TravelTriangle and upon his good feedback, I decided to give them a try.

After submitting my details, I soon received a call from their representatives who understood my queries and connected to relevant travel agents for best packages. These travel agents then sent me multiple quotes and itineraries as per my requirements and I selected the best one.

Soon we were sorted with our family package to Cambodia and were now waiting for the day when our incredible trip would begin.

We traveled from Bangalore to Siem Reap via Bangkok. Our guide/driver picked us up at the airport and transferred to the hotel for check-in. Our hotel, the City River Hotel was located on the Siem Reap river, very close to the city center. The staff was very friendly and the breakfast spread was very good. There was a rooftop pool and bar as well.

Post lunch at the hotel, we visited the jungle covered temple of Ta Prohm which was showcased in the movie Tomb Raider. There are enormous fig trees and gigantic creepers which embrace themselves in the stone foundations of the structure giving the impression of man’s creation being reclaimed by the powerful forces of nature. We had the plan to walk up to Phnom Bakheng Hill for a view of the spectacular sunset over the temples but had to give it a miss as my Mother would not have been able to climb the hill. We had dinner in an Indian restaurant as a part of our itinerary.

Day 2: A magical sunrise and a majestic experience at Angkor Wat Temple

Early morning, we visited the sunrise at Angkor Area – the idea was to view the reflection of the amazing Angkor Wat in the morning sun. We came back for breakfast at the hotel, after which we went on a sightseeing tour of the Angkor area. We spent the whole day exploring the wondrous ancient ruins of South Gate of Angkor Thom, which is famous for its series of colossal human faces carved in stone, the impressive Bayon Temple, the Royal Enclosure, Phimeanakas, the Elephant Terrace, the Terrace of the Leper King, and the largest as well as the most complete temple of Angkor Wat.

This architectural masterpiece was constructed in the 12th century and covers an area of about 210 hectares. We strolled around this massive edifice, seeing the many galleries with columns, libraries, pavilions, courtyards, and ponds full of water reflecting the towering temple. Later, we had lunch at an Indian restaurant as a part of our itinerary.

Then since we had our afternoon free, we did some souvenir shopping in the night market, had dinner at another Indian Restaurant, and called it a night.

This morning, after breakfast, we traveled to the intricately carved and well-preserved temple of Banteay Srei. Along the way, we stopped over at the Preah Dark village and it was followed by a visit to the Banteay Samre Temple adorned with impressive architecture depicting scenes of Vishnu as well as Krishna legends.

Then we continued our visit to the Roluos Group of temples. Roluos served as the capital of Indravarman I (reigned 877-89 AD). Preah Ko erected by Indravarman I in the late 9th century was dedicated to his ancestors.

Bakong is the largest and most interesting of the Roluos group temples, with its active Buddhist monastery just to the north of the east entrance. Lolei is built on an islet in the center of a large reservoir (now rice fields) by Yasovarman I, the founder of the first city at Angkor.

It was a very interesting experience and we loved every bit of whatever we saw. Post dinner at an Indian restaurant, we retired for the night.

After a delicious breakfast in the morning, we checked out of our hotel and then took a 314 km 6hr bus trip to Phnom Penh in the luxurious Giant Ibis bus. Upon our arrival in Phnom Penh, we were transferred to the hotel for check-in. The Cardamom Hotel is a 3-star hotel with polite staff and is located close to the major tourist destinations in Phnom Penh.

We had traditional Khmer lunch at a riverside boat themed restaurant as per the itinerary. Later in the afternoon, we visited the Royal Palace, the Independent Monument, and the Riverfront Park.

Day 5: A fun boat ride in the river and some more sightseeing

We visited the Killing fields of Choeung Ek where almost 15,000 people were killed during the Khmer Rouge as well as Tuol Sleng Prison Museum which was used as a detention & torture center. We also shopped a bit at the Russian Market.

Our lunch again happened at an Indian restaurant. In the afternoon, we visited the National museum, Wat Phnom, and went for a boat ride on the Mekong River in front of Royal Palace for sunset.

Day 6: Farewell Cambodia, we will always remember you!

This was our departing day and after one final breakfast at the hotel, we checked out of the hotel and left for the airport for our flight back to Bangalore.

Suggested Read: 15 Exciting Things To Do In Cambodia For A Truly Refreshing Retreat

Our trip to Cambodia was an amazing experience for us. We saw the life and times of the country reflected on its past history and it was a fascinating experience to dwell in its beautiful architecture and nature. Trips like these are hard to come buy and in the end, I am glad I took it with my parents for they really wanted to be here.

See nature and history come alive in a magical manner. Witness the magic of the past on a trip to Cambodia!

Cambodia In March: An Extensive Guide 2022 To Enjoy A Marchacation