Barcelona In December: 10 Must-Have Experiences That Will Make Your Winter Trip More Magical 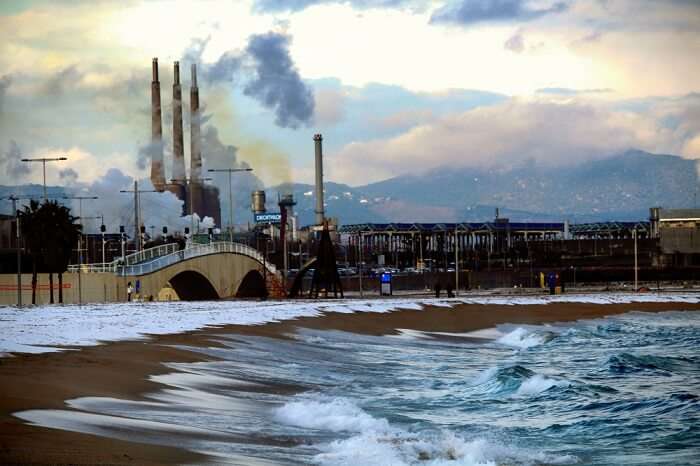 Barcelona in December is a rather unique experience to have in Spain since there is less tourist crowd, weather is cold, there are Christmas festivals, and events filling the streets along with the holiday decorations. So, if you are planning to visit Barcelona in December 2021, then here is a list if things you can do. We’re pretty sure that will add more joy and bliss to your Eurotrip!

10 Top Things To Do In Barcelona In December

Barcelona In December is a memorable adventure and one worth having as you can experience the architecture and history of the city along with the culture and the Christmas Festivities and if you are religious then you can go for the midnight mass in the gothic Santa Maria Del Mar church and you can even hear the 5 minute ‘El Cant De La Sibil La’ just before midnight. Here are some of the best things to do in Barcelona in December.

Recently Barcelona has started this relatively new tradition of setting up ice rinks around the city and tourists and locals alike can now go for some ice skating. This goes on from late November till New Year and the cost for ice skating very depending on the location. Barcelona which was opened in 2015 and located In La Fonda shopping mall is a rather popular skating rink with sports such as ice hockey and curling being played along with ice skating, it even has a café.

Must Read: Barcelona In October: Experience The Grandeur In The Rusty Colors Of Fall

This is a 200m swim across the harbour in Barcelona and this sport has been organized every year since 1907 by the swimming club of Barcelona and is called The Copa Nada, you can watch this race at noon from the Christopher Columbus Statue which is one of the most famous landmark in Barcelona.

This is Barcelona’s biggest Christmas market which takes place in Gothic Quarter in front of the Cathedral and here you can browse numerous shops and buy handicrafts and gifts, festive decorations, traditional instruments and even the iconic caganer figurine also known as the pooping man figurine which is part of the Catalan culture. This market goes on from late November till 23rd of December, from 10:30am to 8:30pm.

Another Christmas market which is held in front of Sagrada Familia church and here you can see numerous stalls selling Christmas decorations, toys, crafts etc and on two Saturdays Father Christmas appears to collect letters from children and hand out cookies and balloon. This market also starts late November and ends on 24th of December, from 10am to 10pm.

During December and the Christmas season the food variety increases, you can try the traditional foods such as the Escudella I carn d’olla which is bowl of pasta shells with meat and vegetables stew, Carn d’olla which is stuffed turkey, the traditional Christmas bread called El Pa de Nadal and the Christmas dessert turron. There are also cooking courses offered where you are given a tour of the market and produce, a practical cooking class and a hearty meal to taste the food afterwards accompanied by some local wine.

With the decrease in tourist crowd visiting museums and architectural sites would be a good idea, there are numerous museums in Barcelona like the Picasso museum or the Dali Museum which is highly recommended especially art enthusiasts, some even have days when the entry is free. Most museums are closed during the Christmas holidays on 25th and 26th of December and it is recommended to check the dates to see when the museums are open.

Despite the various Barcelona events in December one of the most important and biggest event is held on 5th January called the Three Kings Parade and on the 6th is when the three Kings brought the gifts to baby Jesus hence unlike most other countries the children in Spain get their Christmas gifts on this day. On 5th January a huge parade is held which starts from Parc de la Ciutadella at the park entrance and ends at the Magic Fountain near Placa Espanya and during the parade they distribute gifts and sweets all around. If you decide to stick around after Christmas and New year then be sure to check this amazing parade out.

Suggested Read: 10 Hostels In Barcelona That Are Perfect For A Budget Stay

Taking place at the Magic Fountain In Montjuic a celebration is organized which include fireworks and music shows, it is tradition to eat 12 grapes each with the 12 chimes at midnight. Most hotels also run shows and special dinner which you can attend, parties are held almost everywhere including Nightclubs, bars etc as the city really come alive.

In Santa Maria Del Pi, in the Gothic quarter this market includes numerous stalls that all sell artisanal treats and traditional Christmas food such as chocolates, cheese, wines, EL Pa De Nadal, turron, cakes etc. Visit this market if you want to taste some amazing sweets and pastries and to take back home for your love ones. This market is also open throughout the Christmas season.

Suggested Read: Barcelona In Winter: A Complete Account To Help You Plan A Wintry Spanish Spin

Barcelona in December is amazing to just walk around and take in the sights and atmosphere with lights and decorations adorning the streets and houses, Churches of different architectural styles coming to life and market stalls being put up, you can take a guided tour or a personalized tour around the city to see the different places or just do it yourself. Barcelona is one of the top European countries for shopping and hence most shops are open till midnight during the month of December for tourists and locals alike to indulge themselves since no holiday or vacation is complete without a bit of shopping.

The temperature in Barcelona in December drops low but there is rarely any snow and Barcelona weather in December generally Include clear blue skies so just pack some warm clothes and you will be good to go. Accommodation and the cost of traveling is relatively cheap except on the dates of Christmas and New years so it is recommended to book flights and lodging for the beginning or the middle of the month and then spend the Christmas and new years there.

So, there’s no doubt that It is worth visiting Barcelona in December be it with your family or friends. Think no more and plan your trip to Spain with TravelTriangle for a fun wintery vacay right away!