Barcelona In Winter 2021: A Complete Account To Help You Plan A Wintry Spanish Spin 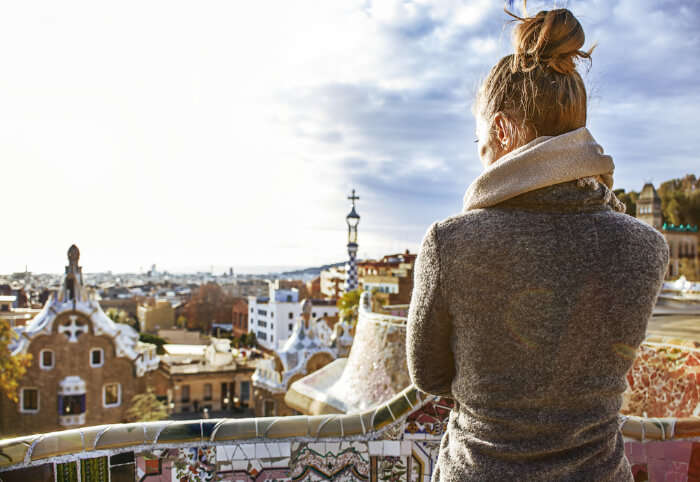 Barcelona, the capital of Catalonia is known for its bizarre architecture, tapas, and wine. Apart from the dozens of sacred churches, Barcelona offers many nightclubs along its beaches, colourful trails like Park Guell, and narrow alleys of the Gothic quarter. Unless one is a beachbum, Barcelona in winter offers a lot of activities to one. With both the summer crowds and rains of the autumn gone, Barcelona makes for a perfect getaway for the winter break.

Winter descends here from December to March and is quite mild compared to the other regions of Spain. The temperature is around 12℃ and rarely dips below 5℃ in the night while days are sunny for most of the time. Fewer crowds are visible. But this does not stop one from enjoying the many things that Barcelona offers.

7 Things To Do In Barcelona In Winter

If you are wondering what to do in Barcelona in winter, here is a list of the exciting things that you can indulge in during winters in Barcelona:

Barcelona in winters allows one to enjoy the famous attractions without having to stand in the long summer queues. The Sagrada Familia and Parc Guell created by the genius architect Antoni Gaudi is one of the best places to visit in Barcelona. The Casa Batllo Museum and the Camp Nou Football Stadium are at their beautiful best. With the streets illuminated with thousands of lights during Christmas, the Placa de Catalunya square is turned into a skating rink.

Must Read: 10 Hostels In Barcelona That Are Perfect For A Budget Stay

if you are visiting Barcelona in March, then you ought to attend the Sitges carnival. One of the most famous carnivals of the world is the Sitges Carnival of Barcelona. With more than 100 years of history, the Sitges Carnival is scheduled either in February or early March. The carnival has more than 2000 participants involved and is an informal and a contemporary party event. Your plans for winter nights in Barcelona are sorted as you can attend the festivities for a fun evening.

The food scene in winter in Barcelona is insane. What could be better than a steaming cup of hot chocolate to beat the cold blues? Every traditional cafeteria in Barcelona serves sweet pastries and catalan delicacies like Turron and Polvoron (crumble prone shortbread). Catalan chocolate is very famous for its thick creamy consistency and is generally accompanied by the sugary churros.

Apart from the sweet treats one can enjoy the unlimited choices of wine and tapas here. Another delicacy during winters are calcots (resembling leeks). These calcots are cooked over open flame, dipped into a rich romesco sauce, and consumed as a whole.

Barcelona winters are all about lying in the thermal baths and having an amazing time. Barcelona has restored an ancient Roman bath in the Gothic Quarters called Aire de Barcelona. One can enjoy hot baths in this candlelit spa at varied temperatures. One can choose between a normal bath, a red wine bath, and scented room. They offer a few treatments with luxurious oils and organic cosmetics as well.

The largest Christmas market in Barcelona called Fira de Santa Llucia is held every year around the historic Gothic Cathedral. This market hosts hundreds of gifts, trees, decorations, musical instruments, and other goodies made by the local artisans. There are a few crib making competitions, parades, and such events for kids while they munch on a few roasted chestnuts to make Barcelona winters fun.

Ice skating is one of the best things to do in Barcelona in winter. Many ice skating rinks turn up all around the city during winters. La Farga is the biggest rink in Barcelona accommodating 350 skaters at once. The rink is open from 10 AM to 9 PM everyday and the admission is at 10 euros per hour. Other than this, go bowling in the Pedralbes neighbourhood. Bowling is one such activity that catalans enjoy. The entry fees is quite cheap with 3-4 euros per game. Other than these, skiing is a favourite sport here. You could also go scuba diving in Barcelona in winter.

On January 6th every year, Barcelona gets together to celebrate the parade of the three wise kings. The kings are greeted at the port as they disembark and the procession moves towards the city centre. Sweets and chocolates are thrown all along the route of the procession. Attending the parade is one of the most amazing things to do in Barcelona in winter.

Day Trips From Barcelona In Winter

Barcelona weather in winter makes it easier for trekkers and nature lovers to explore the countryside of Spain as it is not biting cold. if you are visiting Barcelona in winter, then you could spare some timeout for the day trips from Barcelona.

Montserrat literally means jagged mountains in Catalan language. It is the most popular mountainside that hosts the famous Santa Maria de Montserrat Abbey. This monastery is one of the oldest and dates back to the 10th century and has 150 monks. The sunset from the top of the mountain is breathtaking and one has to take the cable car ride to reach the monastery. This is one of the most sought after place for hikers and is very peaceful during the off-season. Montserrat is easily accessible by train which departs from Placa d’Espanya station every hour. The journey time is about 1 hour to cover 64 kms from Barcelona. One can rent a car too.

GIrona is a small medieval town with colourful streets and sidewalk cafes that are perfect for people watching. Girona houses old buildings as well as modern mansions drawing a clear line between the rich and the poor. One can find many Gothic Cathedrals, Jewish Quarters, museums, and art galleries. One of the must do things in Girona is to try the ice cream at Rocambolesc which is to die for. Girona is easily accessible by road (110 kms), if one rents a car or has a train running from the Passeig de Gracia station.

Suggested Read: 12 Barcelona Travel Tips You Would Need To Know The City Better

Sitges is a coastal town in the southwest of Barcelona, famous for film festivals and carnivals. This glamourous town consists of 26 beaches. It hosts the yearly Sitges Carnival in winters and is a must visit as it has an unbeatable nightlife. One should try the local xeto salad with a unique dressing here. This town is just 35 kms away from Barcelona. A train runs from Passeig de Gracia every 30 mins.

This town is mostly a continuation of the modern architecture of Antoni Gaudi found in Barcelona. This is a haven for art lovers as there are quite a few museums and art galleries like Museu del Joguet and toy museum to visit. One of the famous museums is the Dali theatre museum. The 18th Century Sant Ferran Castle is a must visit site. Figueres lies 138 kms north of Barcelona and is 1.5 hours away. One can take the same train that goes to Girona.

Suggested Read: 12 Indian Restaurants In Barcelona: A Treat To Those Looking For Indian Cuisine In Spain

What better to do in Barcelona in winters than to ski? La Monilia is the perfect place for a family day trip. It is a ski resort 2 hours away from Barcelona. It is easily accessible by bus and costs about 40 euros per person. The ski gears are available for rent at the resort.

Further Read: Two Weeks In Spain: An Ultimate Guide For Exploring The Country’s Gorgeous Marvels Like A Pro

Barcelona in winter is an exciting place to be in. So, think no more and book your trip today with TravelTriangle! Make sure to gather your friends and have a blast indulging in all the touristy activties that Barcelona has to offer you. We promise you a trip of a lifetime.

Is December a good time to visit Spain?

The temperatures are low in Spain during December and the country sees a lot less sun during the month. The best places to visit during December are Barcelona, Andalusia, and Costa del Sol.

Is Barcelona warm in December?

December is one of the winter months in Barcelona and it isn’t really warm but winters here are mild. The average temperature is around 11°C.

Does it snow in Barcelona?

Snowfall in Barcelona in winter is not a usual occurrence, but it is a possibility nevertheless. The snow doesn’t last for long, and melts within a day incase of a snowfall.

What is there to do in Barcelona in December?

Some of the things to do in Barcelona in December are:
1. Visit market of Santa Llúcia, the most famous Christmas market
2. Watch Els Pastorets, a Christmas performance
3. Witness the dazzling light and music show at the Magical Fountain
4. Ice skating at La Maquinista
5. Celebrate Christmas in Barcelona

Which is the cheapest month to fly to Spain?

February is the cheapest month to fly to Spain while June and July is one of the most expensive period.

Is Barcelona cheap to visit?

Barcelona isn’t cheap, but it isn’t too expensive either. One can travel to Barcelona on a per day budget of around INR 5,000 including accommodation, meals, transfers and sightseeing.

How many days in Barcelona are enough?

3 to 4 days in Barcelona are good to explore the city and indulge in various activities there.

Sofia Nightlife: 12 Places Where You Can Loosen Up & Let Your Hair Down

What Makes Monaco In January An Irresistible Place To Take A Vacation In 2022!

Shopping In Sofia: 10 Places To Shop During Your Visit To Scintillating Bulgaria

12 Moldova Restaurants That Will Ensure A Unique Dining Experience

10 Best Day Trips From Luxembourg For A Perfect European Holiday