The Best Scottish Castles Are So Enchanting, You’ll Pinch Yourself To Believe They’re Real! 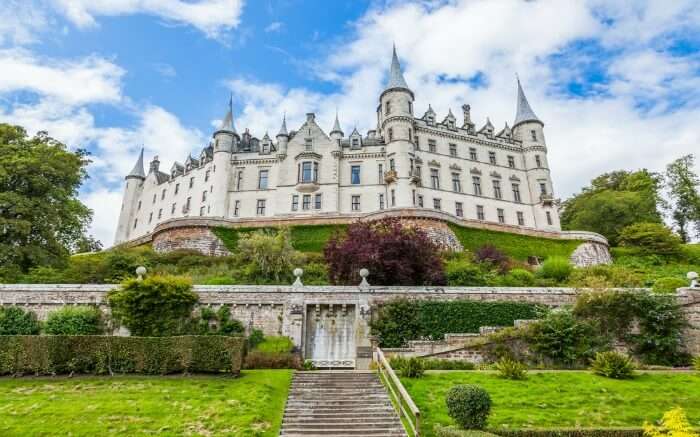 Towering spires, stone-walled turrets, and breathtaking views – everything that one associates with the word ‘castle’ can be found in the long list of best Scottish castles. With each of these overlooking deep lochs and towering over the cities, you’re in for some spellbinding attractions on your holiday in Europe, should you visit the county.

From the fortress making most of the Edinburgh skyline to the ancient structures perched on the shores of the Isle of Skye, there are some envy-inducing castles in Scotland that date back to as early as the 11th century. But the list is too long.

So, if you have made up your mind to travel to the land of numerous spires, this blog post will be the guiding light. Here’s the list of best Scottish castles to visit and the best ones to stay in.

1. Stirling Castle – Standing tall and strong since ages, and through wars

Perched atop a cliff, Stirling Castle’s history traces back to the 12th century. This expansive castle has witnessed the reign of many Scottish royalties like Queen Mary and merciless wars like the Scottish War of Independence. The expansive area of Stirling latches off a wondrous world of entertainment today. Tours, shops, cafes, and events such as Scottish Chamber Orchestra performance keep the visitors amused.

What’s special: Costumed characters wander through Stirling Fort where one can interact with them and know more about the history of the fort.

Dunnottar Castle is one of the best Scottish Castles; the dramatic views of unending ocean & sleep slopes come as a cherry on the top here. The castle was built in the early middle ages and today is in ruins spanning over 3.5 acres.

One of the most popular Scotland’s castles, the Dunnottar Castle attracts tourists who come to unearth legends. This marine castle serves as a venue for weddings and gets featured in movies every now and then.

What’s special: The dramatic landscape with steep cliff, enormous ocean, and of course the remnants treat the eyes. The Dunnottar Castle also has an app for an enhanced experience of your tour through it.

Balmoral Castle is the residence of British Royal Family and a part of it (Craigowan Lodge) is open to public. Exhibition, cafe, garden, rooms, and a gift shop keep the visitors engaged. Often, Queen Elizabeth II herself spends sometime in the lodge during her summer holiday.

What’s special: The castle is the summer residence of British Royal Family, which is visited by Queen Elizabeth II many times.

Note: The Castle opens for a few months every year (April- July). Please make sure you’re going at the right time.

Must Read: 10 Cheapest Cities In Europe For The Budget Travelers [Infographic]

4. Edinburgh Castle – Dominating the skyline of the city

One of Edinburgh’s buzzing attractions, the Edinburgh Castle is much like a solitaire – luxurious and ageless. This hilltop castle dominates the landscape of the city, and a historical extravaganza await inside. An enigmatic stone (The Stone Of Destiny), crown jewels, guns of the medieval Europe (Mons Meg), National War Museum, and One o’clock Gun will strike you with awe.

Shopping, eating, and attending various events are among the other things to do in the Edinburgh castle.

What’s special: Costumed characters wander through the castle to introduce visitors with history and heritage. Also, many major events like the Military Tattoo are organized in Edinburgh Castle.

4. Dunrobin Castle – Reminding us of the Disney fairytale castles

One of the best Scottish castles, this one has its history dating back to 1300s. Much later, the castle served as a boarding school for seven years and today it welcomes tourists from the globe across. The summer house built by William, Earl of Sutherland houses a museum exhibiting archaeological relics, Pictish symbols stones, and heads of animals shot by royal family.

While taking the tour, you’ll come across areas with the early-19th century Victorian setting. Queen’s Corridor is surely an important highlight of the tour.

What’s special: The exhibits in the museum in castle ground are considered remarkable private collections in whole of British isles. The museum originally was a summer house built by William, Earl of Sutherland.

Entry timings: Timings differ from season to season, you can get to know about the same here.

Best Scottish castles to stay in

Scotland’s oldest inhabited castle, Dalhousie Castle was built in 13th century. The fortress is situated amid forested grassland, right on the banks of Esk River. Here, there are numerous activities lined up, you might not ever want to step out. Craving for a soul-soothing spa treatment, you’ve got it! Want to try your hands on archery, you have that too. Wish to feel like a royalty riding a horse? Dalhousie Castle Hotel has it all sorted for you. Your Scottish castle break couldn’t get better than this!

Tariff per night: £143 per night onwards

Rolling green hillocks, views of Loch Faskally, and state-of-art amenities to greet you and keep you warm at heart; Fonab is one of most loveliest small Scottish castles. Don’t let the size of this castle deceive you. The massivity of grandeur and history in here is heavily impactful.

What’s special: The small yet grand castle hotel creates magic with its in-house spa, which is among the finest you’ll come across. With a 15-meter swimming pool, spa pool, thermal suite, and other such luxuries, the spa will certainly relax all your nerves and senses.

Tariff per night: £250 per night onwards

A 17th century archaeological jewel evolved into a luxurious property, Crossbasket is among the plushest castle hotels in Scotland. Each of the en-suite rooms in this castles are exclusively crafted to match modern standards, still gripping onto the authentic Scottish heritage. Beside the detailed architecture and interiors, the Calder River, waterfall, garden and woodland heighten the lure of this property.

What’s special: The castle was restored to its original form with dedicated craftsmen, and traditional materials. Other than the luxury, the location is a heart-stealer.

Tariff per night: £256 per night onwards

9. Glenapp Castle – Utopia is the word

Welcoming as your own home, Glenapp is among the warmest castle hotels in Scotland. Snuggled amidst miles of woodland, this castle allows you to mingle with essence of nature, while spoiling you with luxury at the same time.

What’s special: Alongside attention to details, this castle hotel robs up all the brownie points with its location that looks like dream; a countryside brimming with lush greenery.

Tariff per night: £305 per night onwards

10. Inverlochy Castle – Opulence and antiquity at one place

The list of luxury Scottish castle hotels is considered incomplete if Inverlochy is missed out on. Having its history dating back to 19th century, Inverlochy castle is enveloped with thriving plantation of evergreen trees, and the lake by its side make the landscape more enticing.

All of the 17 rooms boast of their own distinctive theme and decor; reminding the beholder of Victorian era.

What’s special: Each of the rooms in Inverlochy are designed individually, and with equal dedication. Even the culinary experience of the hotel is something to relish. There are three dining rooms decorated with a period finish.

Tariff per night: £425 per night onwards

So these were the best Scottish castles that we’re crushing on. Know of more such castles which were built solely to steal hearts? Let us know!

13 Serene Places To Visit In Chopta That Will Make Your Mood Delightful In 2020!

53 Best Places To Visit In Andaman In 2020 For A Mesmerizing Holiday Experience!

Russia In September 2020: Things To Know Before Planning A Trip In This Month