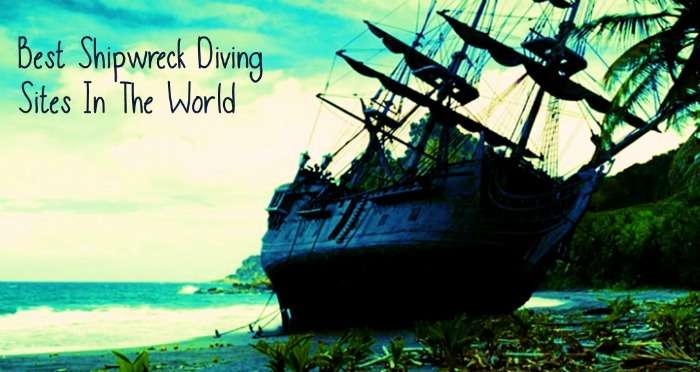 The sea is full of mysteries, whether it is the brilliant aquatic life or the beautiful corals. But why just limit your exploration to the underwater flora and fauna when you can dive to an underwater museum?

Go wreck diving to explore the depths of the ocean and get mesmerised by the wrecks of centuries old ships, aircrafts and much more for an experience of a lifetime. Check out below for some of the best shipwreck diving sites in the world and make plans for this summer.

An ideal starting point for first time explorers, the Kittiwake is one of the best shipwreck diving sites in the world. It was actually purpose sunk off after stripping it of hazardous objects and clearing out all the exit points. Since the ship is sunk in shallow waters, you can dive and explore this 76 m long wreck all day long without a single worry.

History alert! In 1941, two bombs sunk S.S. Thistlegorm, a British armed Merchant Navy ship in the Red Sea. But what makes it even more fascinating is that this wartime wreck still holds most of her cargo. Check out the wartime supplies, including the Bedford trucks and a fleet of Norton 16H motorcycle. It is undoubtedly one of the most amazing shipwreck diving sites in the world.

Bored of ships? Then visit this dangerous yet adventurous underwater shipwreck diving site. The wreckage of the San Francisco Maru which was sunk in 1944 while carrying a payload of tanks, trucks, mines and bombs. This ship has a lot to see but one of its most striking views are the three Japanese tanks, intact on its deck. Just make sure you don’t touch anything!

Drowned in 1911 due to a cyclone, the S.S. Yongala is now ones of the best shipwreck diving sites in the world. Here, you don’t just get a glimpse of the history but also of the wonderful aquatic life that has made the wreck its home. Sea snakes, turtles and clownfish congregate on this 358-foot steamship, along with manta rays, octopuses, bull sharks, tiger sharks and beautiful corals. A dive here is purely breathtaking, if not for the oxygen tanks blocking your mouth!

Sunk during the second world war, the SS President Coolidge one of the few fully intact wrecks in the world. Dive here to check out the cannons, chandeliers, jeeps, trucks, an actual porcelain statue called‘The Lady’ and even a mosaic fountain. A relatively shallow site with easy beach access, this makes for a great vacation point and a fascinating dive.

Sunk in 1961 due to a fire, the luxury liner Bianca C is the largest wreck you can explore in warm waters of the Caribbean. Today the vessel sits upright in 50 metres of water and makes for an incredible dive. You will see not just the amazing ship but also the incredible marine life like stingrays, barracudas and reef sharks, not to mention colourful corals and sponges.

With over 1000 ships, the waters in North Carolina are suitably called the ‘Graveyard of the Atlantic’. Packed with marine life and bathed by the clear, warm waters of the Gulf Stream, the coast offers some of the best wreck diving in the United States with ships dating back to the 16th century. And why stick to just one, when there are thousands to explore?

Must Read: 20 Beaches With Water So Clear You Would Want To Splash Right In!

The Rozi MV was purposefully sunk in 1991 intended as a submarine tourist attraction. Completely safe from inside out, this wreck has a mass of sea life around it including barracuda, morays, octopus, cuttlefish, dolphins along with a P29 minesweeper patrol boat. A perfect spot to enjoy a European summer, inside out!

If you are not the kinds to get a kick out of the great unknown, then take a trip to the tropical paradise of Aruba. Known as one of the best shipwreck diving sites in the world and as the German Ghost Ship, The Antilla was intentionally sunk here in order to prevent the ship’s capture during the Second world war. The largest shipwreck dive in the Caribbean, it starts at just 30 feet and is covered with spectacular marine life including tube sponges, coral formations, tropical fish, coral shrimp, arrow crabs, hermit crabs and orange anemones.

Why travel far when you have a Japanese wreck-dive close home. Sunk during the second world war, the Inket lies near the Duncan Island in the Andamans. It is one of the best shipwreck diving sites in the world. There is much to see here including an enormous propeller, and intact parts of boilers and engine room. Of course, be sure to take a second to gawk at the marine life and even the dolphins who often show up at the site.

Must Read: The Most Amazing Instances of Scuba Diving in Andaman Islands

Wreck diving is a great way to get a glimpse of the rich history. With hundreds of shipwreck diving sites in the world, you never know what more you could end up exploring. So which underwater relic are you excited to visit?

Toss Out Your Itinerary For These 14 Unique Experiences In Sri Lanka No One Knows About!