In Pictures: The Most Interesting Borders Between Countries Across The World 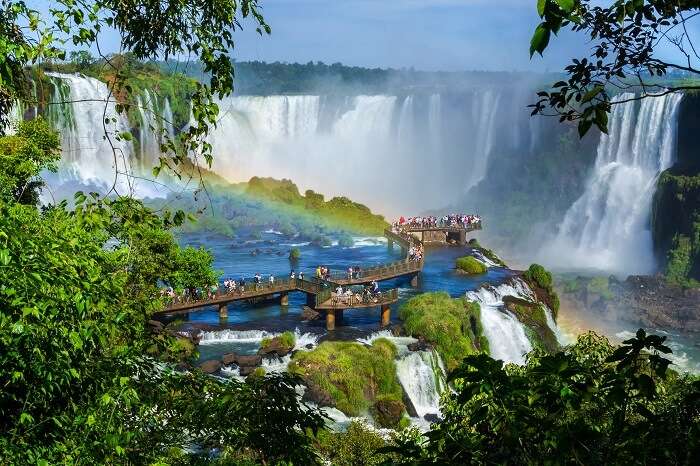 Are borders really just armed guards, barbed wires, high fences, and security checks? Well, I say, let us agree to disagree. Borders are not symbols of war, hatred, or death. What if I were to say that some borders are, in fact, symbols of love, friendship, and beauty! Surprised?

To shatter all stereotypes, we bring you a list of the most amazing borders between countries across the world. Check them out.

Some people across borders simply like to settle things over a round-table conference at the border.

1. Germany, Netherlands, and Belgium: The Dreiländerpunkt near the city of Aachen

2. Austria, Hungary, and Slovakia: A picnic spot in the middle of nowhere

Others fancy a nice fine dining experience at the border.

And for the adventure lovers…

4. Spain and Portugal: Zipline across the nations

5. Norway and Sweden: Tobogganing at the snowy slopes

Because reading has no boundaries…

But should sports be any different?

7. USA and Mexico: Fence at Naco

8. Finland and Sweden: Golf Course at the border

There are also some beautiful manmade wonders at the borders

9. China and Mongolia: At the City of Dinosaurs

10. Netherlands and Germany: Through the Eurode Business Center

There is a police office and a post office each on either side of this border.

And we simply cannot miss these natural wonders

12. Argentina and Brazil: Through the Iguazu Falls

13. Zambia and Zimbabwe: Through the Victoria Falls

14. Germany and Czech Republic: On the Bastei Bridge

16. Nepal and China: Over Mt. Everest

Oh yes! The border between Nepal and China actually passes through the top of the Mt. Everest. Amazing, isn’t it?

The triangular plateau of Mt. Roraima has the three countries on the three sides of the plateau.

18. Slovenia and Austria: At the Kepa Mountain

If you take a walk along the top of the Kepa Mountain, you would, in fact, be walking right along the border of Slovenia and Austria.

19. Russia and United States: At the Diomede Islands

The border between USA (Alaska) and Russia passes through the Bering Strait. The Diomede islands lie in the middle of the strait. On the Russian side lies the Big Diomede Island. On the side of Alaska lies the Little Diomede Island.

But let’s not forget this one…

20. India and Pakistan: The Wagah Border

Yes, it is much like a conventional border. But the matched show of retreating parade on either side is a sight to watch. And let’s not forget the Independence Day celebrations. While Pakistan celebrates its Independence Day on 14th August, India does so on 15th August.

Here, have a look at the Independence Day Celebrations from 15th August 2015.

Must Read: How India And Pakistan Are Not So Different From Each Other

So, which of these borders interest you the more? Let us know and we will help you plan a holiday to these destinations.

10 Local Dishes To Try Around The World This Christmas