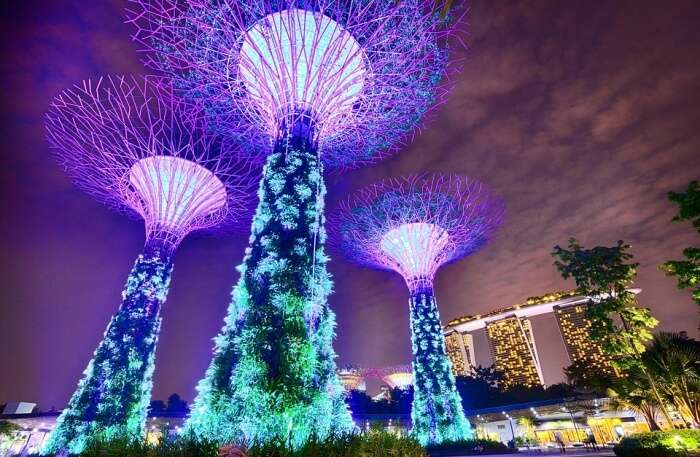 Gardens By The Bay is a marvelous nature park in Singapore and a highly popular place to visit in the country. Established on reclaimed land covering 101 hectares area, this nature park is located next to the Marina Reservoir. Gardens By The Bay has 3 waterfront gardens namely Bay South Garden, Bay East Garden and Bay Central Garden. You would also find some really stunning bridges near Gardens by the Bay Singapore. A striking feature of this Garden is its Supertrees. There are a total of 18 of them in Gardens by the Bay and 12 of them have been installed together, forming the Supertree Grove.

Bridges Near Gardens By The Bay Singapore

Here are the most popular bridges near Gardens by the Bay Singapore that you must surely add to your trip itinerary. These bridges offer astonishing views of the city and are also perfect for clicking pictures.

Located near the Gardens By The Bay, Dragonfly Bridge is a spectacular bridge on the Dragonfly Lake in Singapore. This wonderful bridge links the strip of land between the ECP to the Gardens By The Bay. It is just a minute away from the popular Garden By The Bay and can be reached within a minute walk. The Dragonfly Bridge is a pedestrian bridge which means it is a footbridge and not a vehicular one. The structure of the bridge makes it a rigid frame bridge which stands with the support of red V-shaped metal legs. This Bridge offers a stunning view of the beautiful Dragonfly Lake with the Supertrees at the Silver Garden forming the backdrop. Construction of the Dragonfly Bridge was completed in 2012. On the occasion of the 20th World Orchid Conference’s World Orchid Show, the bridge along with the Dragonfly Lake was opened to the public. The Conference was held from 4th to 23rd November 2011.

The Helix Bridge is the world’s first curved double helix bridge and a remarkable piece of architecture. Its a pedestrian connection across the head of the Singapore river between Central Business District (CBD) and its new Bayfront district. Tourists love to capture this piece of beauty in their cameras. Its also a wonderful place to take a long walk with your love.

Other things you can do on your honeymoon include, star gazing at Science Center Observatory, exploring Haw Par Villa park, having breakfast with Orangutans in Singapore Zoo, and exploring a serene island called Pulau Ubin. You can also check out some really interesting free things to do in Singapore to add some more fun to your honeymoon trip

Read More: Things to do in Singapore on your honeymoon

Are you excited about visiting Gardens By The Bay on your next family trip? Plan a Singapore holiday and explore all the amazing places to visit in the Garden City including this nature park. Also, explore the stunning bridges near Gardens By The Bay to catch the most splendid sights of this island country.

20 Best Beaches For Honeymoon Tailored For Leisurely Romance In 2022