10 Castles In Greece That Testify The Country’s Glorious Past 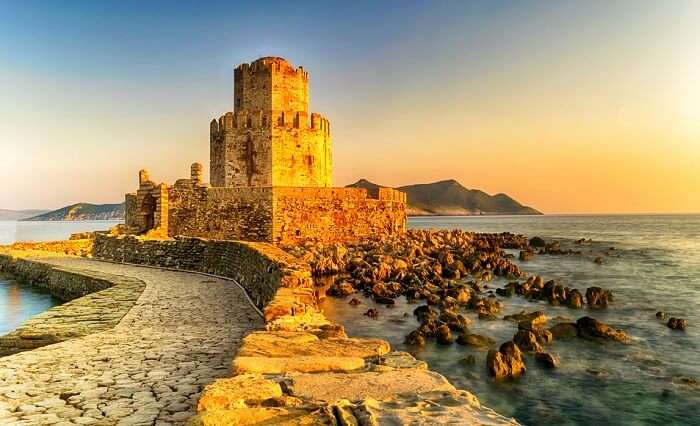 You must be aware of Greece’s rich culture and food, but did you know about some of the most stunning castles in Greece? Believe it or not, there are about 800 majestic castles that will definitely take your breath away. These castles put a charm to the unparalleled beauty of the country. Don’t believe us? Well, we have put together a list of castles in Greece. So, find out yourself and do pay a visit to them during your next Greece holiday!

10 Most Stunning Castles in Greece

Ancient castles have always intrigued us! Their old world charm and majestic vibe take us to a completely different era. The castles in Greece have witnessed so many events in the past and now stand as the story-teller to its visitors. Here is a list of 10 best castles in Greece that you will definitely leave you speechless. Take a look and add them to your itinerary while visiting Greece next time! 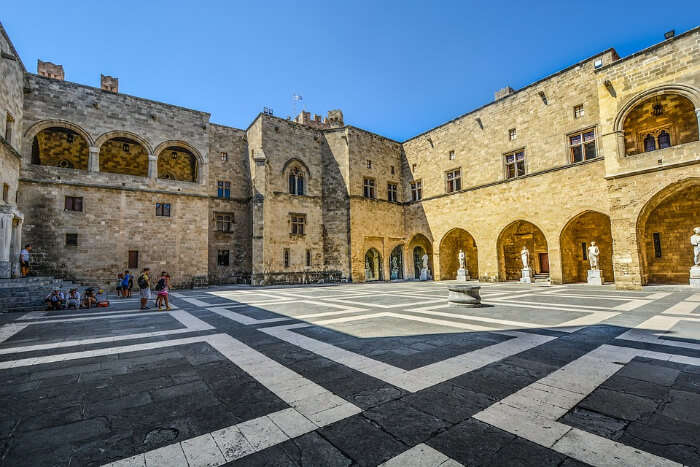 Rhodes was invaded by many civilisations and empires and is home to numerous castles and fortresses. The lovely medieval old town of Rhodes is now recognised as a UNESCO global history site, which consists of the palace of the Grand Master of the Knights of Rhodes – an outstanding medieval citadel built inside the 14th century by the Knights of St John. This structure is one of the most well-preserved castles in Europe, and is an absolute delight to see while you are touring Rhodes. 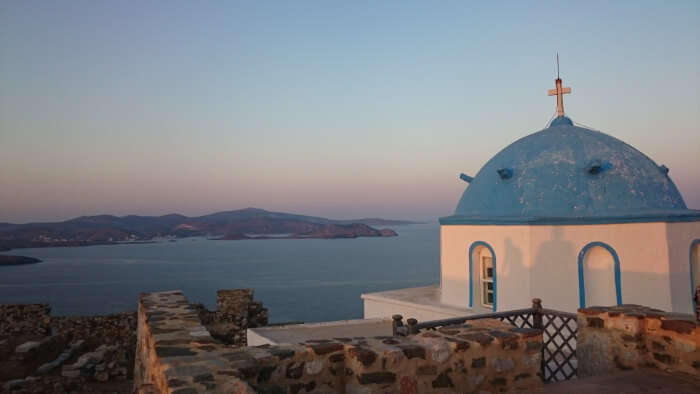 This Venetian fortress of Astypalea, also referred to as the Venetian Castle of Querini, dominates the fantastic Chora (main town) of the island from the pinnacle of the hill. The majestic castle is made from dark stones that add a contrast against whitewashed houses throughout the fortification. The history of this Venetian Castle is affiliated with the struggle of gaining power among the Venetian, Byzantine and Ottoman rulers. This castle definitely has an unforgettable panoramic view which will leave you in awe.

Must Read: Road Trips In Greece 2022: It Is Time To Hit The Roads And See It All! 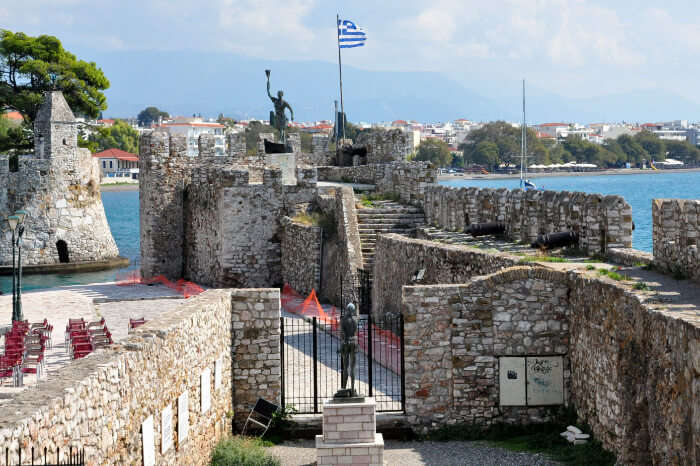 The castle of Lepanto, also known as the Castle of Nafpaktos, is one of the most well-preserved castles in Greece and an ideal example of the Greek architecture. The entrance to the Gulf of Nafpaktos was turned into the battleground of one of the most important battles in history. However, the original walls of the building date back to the ancient times, and what remains till date can be seen on the western region of the castle. The castle has a circular wall which surrounds the hill from both sides and offers a spectacular view! 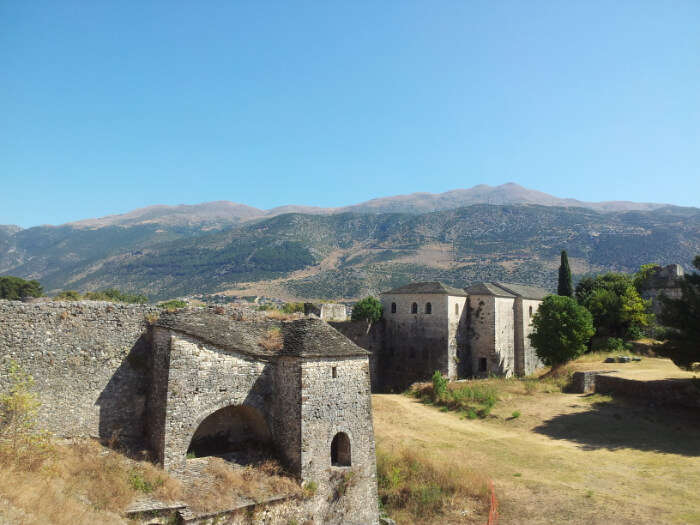 The castle of Ioannina is located on a 480-meter hill in Epirus, overlooking the Pamvotis Lake. The current form of the structure dates back to the Ottoman period, while it also has a few elements which belong to an early Byzantine fortification. You should definitely pay this castle a visit not just for the views from the top of the hill, but also to know the history behind the most beautiful castles in Greece. 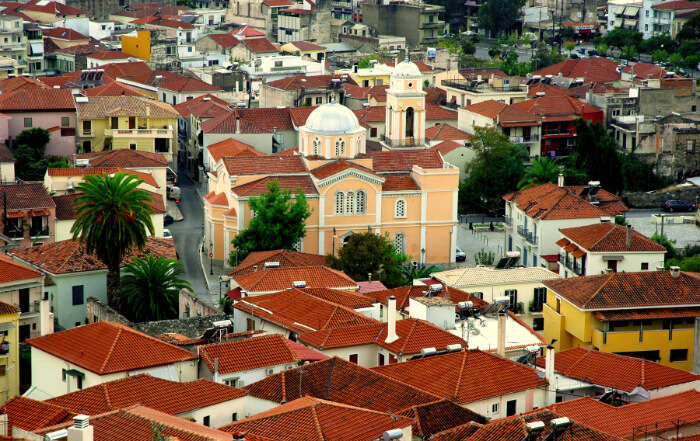 The Castle of Kalamata is located on a rocky hill on the northwest side of the city. Just like the other castles, there is evidence of an ancient acropolis present on the hill. Within the castle, there is also a church dating back to the sixth century AD made to worship Virgin Mary. The idol of the Virgin Mary inside the church became known as Kalomata (which means ‘stunning eyes’), a phrase that later became kalamata, giving the name to the church, the castle and the city. 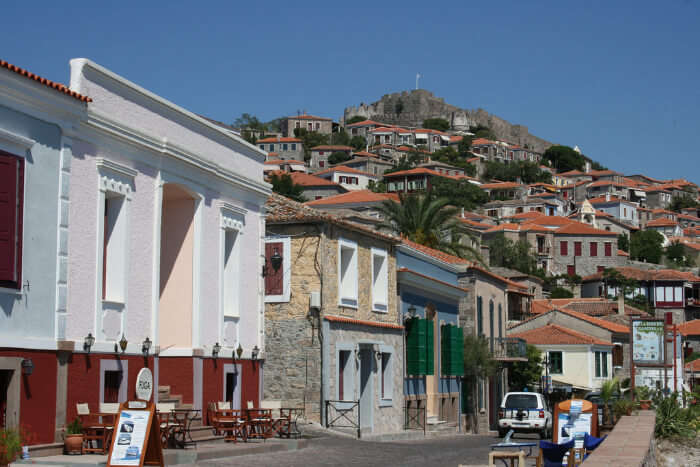 This castle is also known by the name of Castle Mithymna, and it is also the second most renowned and important fortress belonging to the Lesvos island. The current shape of the castle is due to the work that was carried out by the Genoans during the 14th century. This castle sits proudly on a hill, which also is evidence that it sits on an ancient acropolis dating back to 5th century BC. 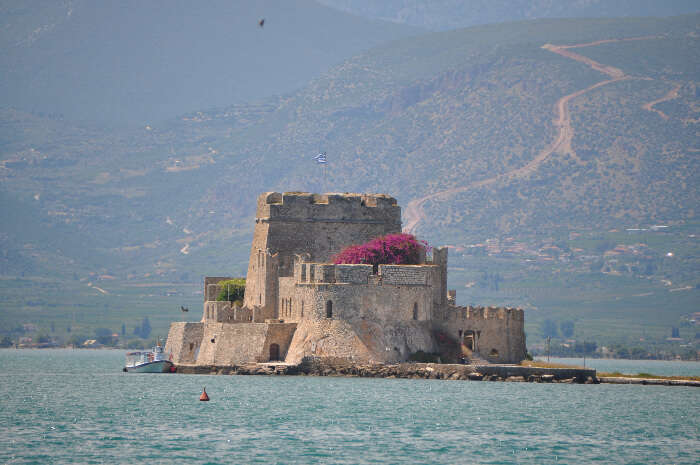 This majestic castle known as Nafplio is one of the most beautiful castles in Greece. It is located in Peloponnese, which belonged to the Venetian period. The Castle of Nafplio is maintained very well, and is an ideal example of the Venetian fortifications found in the country. This Baroque style castle, sits proudly on a 216- meter high hill that has its advantages as the castle governs the city of Nafplion. 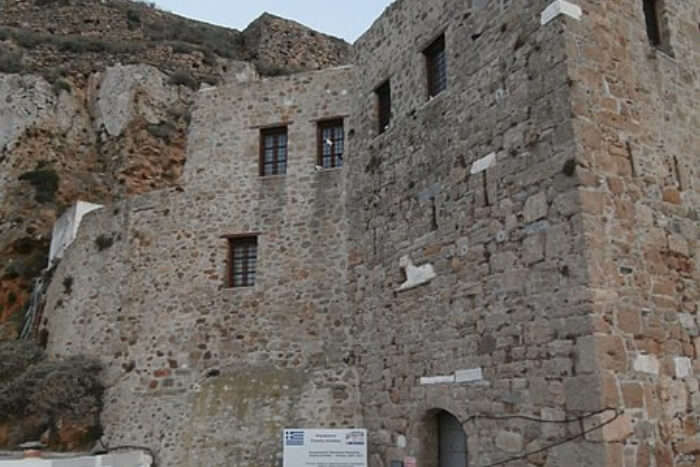 This castle is set on the best point of the Skyros town, presenting perspectives of the land and the sea, the fort of Skyros has a lengthy history which has its roots in the Byzantine period. Even though the structure is simple, unfortunately it is not maintained properly compared to the other castles in Greece. Currently, it has a few ruins of some of the fortifications and includes the monastery of Agios Georgios, found in the tenth century. 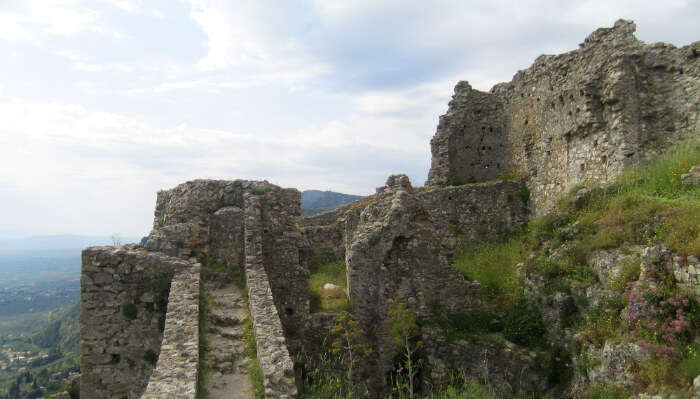 Mystras is an abandoned town located near Sparta, which are at the slopes of Mount Taygetos, in Peloponnese. This city has a medieval castle that was built during 1249 by a Frankish noble named Geoffroi de Villehardouin. He was also famous for conquering Peloponnese but it was quickly reclaimed by the Greeks. This bridged the gap between the Greek and Frankish cultures, giving birth to a unique art which had a fusion of both the societies. Today the city is also listed under the UNESCO – listed monument, adding more prestige to its culture. 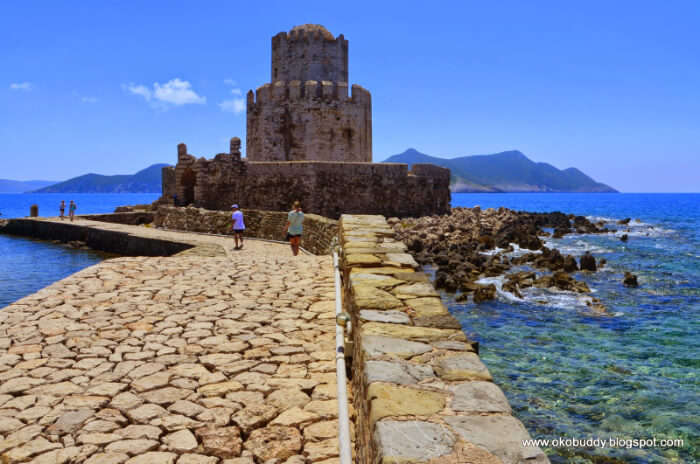 This castle is one of the most beautiful castles in Greece. It was built in the 13th century by the Venetians, and it sits on a rocky peninsula surrounded by water in the picturesque town of Methoni, Messinia. The Methoni Castle Greece by far the most unique castle in greece, it has an arched stone bridge which connects the castle to the shore. This castle should definitely be on the top of your must visit list when you are in Greece.

These castles in Greece offer a different take on the history of the city of Greece. The picturesque views from the castles are just unforgettable, and something which you can enjoy while you are there. If anything, visiting these beautiful castles in Greece will bring you one step closer to history. So, buck up and plan a trip to Greece right away!