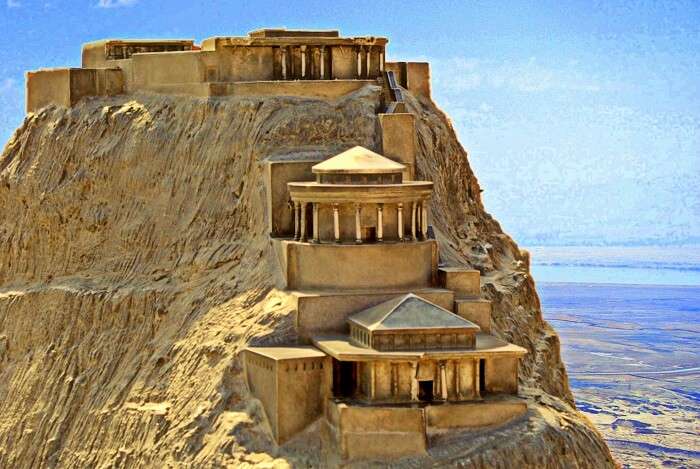 Israel is a home to a number of Crusader castles built mostly by the Roman Catholics during the power struggle between the two religious communities over the Holy Land. The castles were tactically built over the hills near significant trade routes giving them the power to have a control over the state’s economy. The sturdy stone castles built during the violent times of the 12th century still stand strong in Israel. Some of them are major archeological sites where many artifacts from the Byzantine period have been uncovered. Let us have a look at this list of medieval castles in Israel and get a peek into the time of power struggle in the Middle East.

A visit to at least five of these castles in Israel is a must for all fans of history and architecture. So, which of these would you visit first on your holiday?

A few kilometers south of the Sea of Galilee, on the hills of Issachar stands the majestic Belvoir Castle in Israel overlooking the River Jordan. The Belvoir Castle was built by Velos in the early 11th century with two coaxial fortresses, watchtowers and a moat. The castle, with its strategic placement, has proven to be the best defense from the eastern invasion. Though most of the castle walls are in ruins, restoration work in the Belvoir Castle in Israel is under progress and is open for the public to walk through the glorious fortress.

Nimrod Fortress is seen perched on the foothills of the highest snow-capped mountain of Israel-Mount Hermon. It is located near the Banias Nature Reserve in the Hula Valley and is the biggest fortress of Israel. It was built by the king Nimrod in the later years of 12th century. The main attractions of the fortress are the towers, the cistern fountain and the inscription on the western gate. Visitors can opt for a day hike to the fortress where one can even enjoy the beautiful Golan Heights views.

Kerak Castle is a magnificent castle built in the Levant region of the Middle East. It was built by the King of Jerusalem in the early 11th century and is the most well-preserved castle in the region. The castle is being refurbished in parts and the main interest of the Kerak Castle is an archeological museum that showcases the history and triumph of the castle. It is the most visited tourist attraction in the Levant and is a great way to get a glimpse of the Ottoman rule in the country.

The ruins of the 13th century Montfort Castle in Israel can be found in the Nahal Kziv Nature Reserve of the Galilee Valley. The secluded fortress can be reached only on foot. One has to hike through the nature reserve past the River Kziv to reach the castle which takes about an hour. The most interesting part of the Montfort Castle in Israel is the Gothic Hall that was built during the reign of the Teutonic Knights in the area.

Also known as the Arsuf Castle ruins, this Crusader castle in Israel has a history of over a thousand years dating back to the Byzantine era. It is located to the south of Caesarea overlooking the Mediterranean Sea. The ruins have been excavated in the Apollonia National Park where visitors can see the proof of the battle between the Lionheart and King Saladin.

Atlit Fortress is more commonly known as the Chateau Pelerin in north Israel. This ancient Knights Templar Castle was built in the 12th century and is currently under the control of the Israeli Navy. Since it is a defense area, visitors are not allowed entry into the fortress. Instead, one can visit the Knights Templar Castle hall in the city of Akko a few kilometers away.

Caesarea is a major archeological port city in Israel where the remains of the ancient Roman City built by King Herod is found. Excavations by archeologists are still carried on while a few remains such as the Roman amphitheater and the Roman fountain have been refurbished and open to the public. It is also a venue for major public events in the country and the most visited castle in Israel. A Crusader Cathedral, King Herod’s Palace and the Hippodrome are the must-visit attractions in the city.

Masada Fortress is a desert fortress located on a high plateau adjacent to the Dead Sea. Sitting on the hill is the Palace built by the king Herod along with some Roman bathhouses, watch towers and a Synagogue. The palace ruins are ethereal with colorful tiles on the ceiling. It makes a for a perfect day trip from Tel Aviv. One can either hike up to the fortress or ride a gondola. The fortress has also been a venue for many events in the past and continues to hold the visitor’s intrigue through a sound and light show every evening.

Israel has a barbaric history of battles and power struggle and these castles in Israel are the proof of it. It is interesting to learn how Israel got back its independence from the rule of Greeks, Persians, Romans, Ottomans, and the Teutonic Knights. Book your trip today with TravelTriangle to experience the days of the Roman rule in Israel’s archeological castle ruins.

Best Of North India On A Religious Historic Tour To Vrindavan, Mathura, & Agra