10 Stunning Mosques In Israel: A Glimpse Into Its Rich Architecture And Heritage 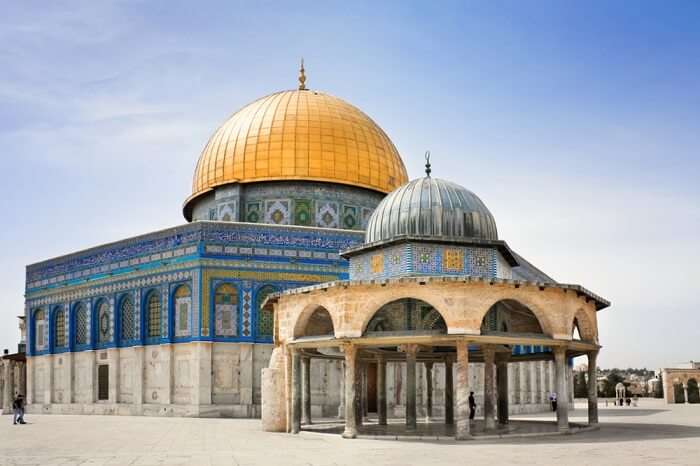 Around the world, there are several mosques which are known for their architectural beauty, their religious practices, or their magical powers. Mosques offer a very serene and calm environment, where one can meditate or just take part in the daily prayers. Each year, these famous mosques receive millions of devotees as well as tourists. When it comes to Israel, the entire country is dotted with over hundreds of mosques. Few cities like Jerusalem, Jaffa, and Acre are known to have some of the best mosques in Israel, and a trip to Israel would be incomplete without seeing these!

There are several famous mosques like the Al-Aqsa Mosque and Dome of the Rock, Mosque of Omar, White Mosque, Hassan Bek Mosque, and more. Here is a list of the mosques in Israel that you must visit:

Al-Aqsa Mosque is also known as the “farthest mosque” in Israel. It is located in the old city of Jerusalem and is the third Holiest site according to Islam. According to the legend, Mohammed was moved from Mecca overnight to this mosque. The mosque has been rebuilt multiple times either due to natural calamities or invasions. It is very closely located to the Holy sites of Jews and Christians, making the area prone to controversy.

Must Read: 10 Best Places To Visit In Israel In 2022 For An Extended Tour Of The Holy Land

This mosque is located in the southern part of Jerusalem, in the Christian quarter. The mosque was built in honor of Caliph Omar, who had traveled to Jerusalem to accept the surrender by Sophronius. It is famous for its intricately designed minaret and the overall architecture of the mosque.

This is the oldest mosque in the city, located cozily in the Old City area of Nazareth. The architecture of this mosque was influenced by the Ottoman style. Most of the buildings in Nazareth have been built as per the Ottomans architectural designs. The mosque offers religious classes to all the young men. They also actively sponsor boys and girls scout tours. Apart from this, they are also famous for the museum inside the mosque complex which showcases the history of Nazareth.

Located near the Al-Aqsa Mosque and Dome of the Rocks, this mosque was built in an area meant for stables. It also happens to be the largest mosque in the whole country. It was originally acquired by the Jerusalem Islamic Waqf for prayers during the rainy season. Later, the prayer hall was turned into a proper mosque which could house over 10,000 people at a time. A lot of historians and critics say that this expansion was done to strengthen the hold over the temple area.

The mosque is built overlooking the Mediterranean Sea and is famously known as the “White Mosque” of Acre. The mosque has been built keeping in the Ottoman style of architecture with a perfect blend of Persian and Byzantine styles. The remarkable minaret, sabil, and the huge courtyard add to the charm of the mosque’s architecture. It is one of the largest mosques in Israel currently. Before the dome was painted green, it used to be silver-white in color. On a full moon night, the dome of the mosque would sparkle from afar. This is why the mosque was also called the “White Mosque”.

Al-Bahr Mosque is one of the oldest standing mosques in Israel. The literal meaning of “Al-Bahr” is The Sea Mosque. It is built on the shore of the Mediterranean Sea and is mainly visited by the local fishermen and sailors. The close proximity to the sea and its wonderful architecture makes this mosque worth visiting. The scenery around is captivating!

Hassan Bek Mosque is named after the Turkish-Arab governor who got the mosque built. The mosque has been a center of controversy for years now. The minarets were once used by the snipers to shoot their targets. The mosque is made of limestone mainly, with the walls being intricately carved and etched. The main courtyard of the mosque is used for prayers. It is a beautifully built mosque and a very famous mosque in Israel.

The mosque was built to honor the second Khalifa, son of the Khalifa who founded the Ahmadiyya Muslim community. The second Khalifa was also known as the “Promised Reformer”. The mosque is famous for its amazing architecture and the way its two, tall minarets adorn the skyline of Haifa. The mosque is situated in a neighborhood which also is home to Mount Carmel, a place of worship for the Jewish community.

Great Mosque of Gaza is also known as the Omari Mosque. It is the oldest and largest standing mosque in Gaza. The mosque was initially a Christian place of worship, which was taken in conquest and converted into a mosque. The mosque is situated in a busy area and to the south is the biggest gold market in Gaza. The main door of the mosque has names of various rulers inscribed on it. The famous minaret of the mosque was built by the Mamluk rulers.

Another mosque quite close to the Al-Aqsa Mosque is one of the famous mosques in Israel. It is the main mosque in the eastern part of Israel, making it the center of all religious activities. The mosque was built in 1939 and thus, the architecture is a mix of old as well as modern styles.

Tips For Visiting Mosques In Israel

If you are planning to visit these mosques while you are in Israel, here are a few things that you must keep in mind:

How To Reach Israel From India

The Isreal international airport is located in Tel Aviv, known as the Ben-Gurion International airport. It is about 40 kilometers from Jerusalem. Local buses, taxis, and trains are available from the airport at reasonable prices.

There are daily flights available to Israel from all major Indian cities. The approximate journey time is about 8 hours, depending on your layovers. The popular airlines for traveling to Israel are Emirates, Jet Airways, Turkish Airlines, and Ethiopian airlines.

The best time to plan a trip to Israel is during April, May, September, and October. During these months the temperatures are moderate. There are hardly any heat waves or rainfall around this time. However, if you are traveling on a budget or would like to get the best deals, then you should plan a trip during the winters. The hotels and flights are quite cheap during the winter season and you will be able to avoid the tourist crowd as well!

Further Read: Do Not Forget To Visit These 10 Incredible Castles In Italy On Your Next Trip!

These Mosques in Israel are an integral part of this amazing country’s rich heritage, religion, and the expert masonry of that time. Travelers from all over the world come to Israel every year to witness the glory of these mosques with their own eyes. For a memorable and hassle-free experience, book your trip to Israel right away before all the great travel deals are gone!

3 Temples Near Merlion Park In Singapore You Must Visit

3 Temples Near Mega Adventure-Singapore You Must Visit