10 Best Castles in Luxembourg That Are Replacements For Sheer Magnificence! 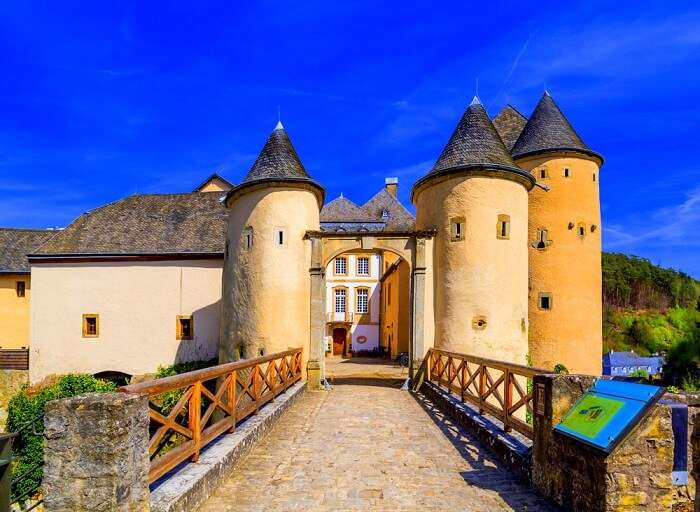 With varying rich history and prominence in its heritage and culture, Luxembourg does have a lot of things you need to venture into. The most important aspect of Luxembourg is the wide range of castles and palaces that litter the entire place around. The close-knit community that resides in this small country further make it one of the most sought-after tourist destinations. The stately palaces and the beautiful castles are the perfect depictions of the beautiful history and architecture of the place around. The archaeological history of the place is also often depicted through the castles in Luxembourg.

In this article, we have compiled a list of the top 10 best castles in Luxembourg that not many people are aware of.

The very first thing to look out for when it comes to the wide range of castles around the place is the Grand Ducal Palace. It was used as a grand base by the Grand Duke to run his official duties. Located in the heart of the Luxembourg Palace itself, the palace is known for its extensive reverent beauty around. It dates back to the time of the Second World War and was the one that didn’t undergo any kind of dilapidation during the Nazi ruling. The exterior of the palace showcases the beautiful imprint of the Flemish Renaissance from the 16th century itself. There are guided tours that are held during the summer months.

Must Read: Luxembourg In Winter: 9 Best Places To Explore This Winter Wonderland

Next on the list is the Bourscheid Castle which is located in Bourscheid itself. It is believed to be one of the oldest castles in Luxembourg, one whose archaeological evidences date back to the Roman times. The entire place is home to a keep, a palace as well as a chapel which is encompassed all around with four different towers. The building was acquired back in 1972 which is believed to have undergone a lot of architectural transformations over the years. The evening view of the castle with the entire area being lit around is believed to be something completely out of a movie.

The Vianden Castle in Luxembourg is one of the most popular castles around the entire country of Luxembourg. It was built between the times of the 11th and the 14th century to commemorate the contributions of the Court of Vianden and has been named after the same as well. It is one of the largest castles West of the Rhine. The castle initially had Romanesque designs but then witnessed some more inscriptions of the Gothic realms in the form of intricate stone carvings, color user etc. The castle recently underwent a complete restoration which has restored it in its former glory.

The Beaufort Castle in Luxembourg is yet another one of the monumental places around the country. It is one of the oldest European medieval castles which stands out from the medieval fortress which was predominantly guarded around by the large moat. The ownership of the castle has been handed down from people to people and now is completely desolate and without any kind of owner. It also was a residence for quite some year altogether. It is considered as the National Monument of Luxembourg even with the kind of desolation it has undergone.

Don’t get deterred by the similarity in the name, the New Castle of Ansembourg is yet another one of the amazing castles around that is a must visit. It was built back in the year of 1639 as a residence and is located in the Valley of Seven Castles. It was primarily known as the “House of the Ironworks” following the first owner who worked as an ironworker. The property was finally inherited by the Marchant family back in the year of 1719 following which is undergoing a number of changes to its outlook. It is also believed to host a wide range of festivals and events the entire year round and the castle garden further add to the beauty of the place. They are open daily.

As hard as it might be hard to pronounce, the Esch-Sur-Sûre Castle gets its name from the town it is located in. The historic value of the place is believed to hold a lot of protective importance around. The river Sûre which furthermore encapsulates the entire place, further adds in a layer of protection. The very first tower of the castle was built back in the year of 927 in a typical Romanesque style with a bit of an addition of Gothic style to it. The castle is preserved as an important historic treasure and is lit up during the evenings.

Don’t be confused because the New castle of Ansembourg and the Ansembourg Castle are two different establishments. It is located about the village of Ansembourg and is home to the Count of the region. While the correct dates behind the establishment are still a bit confusing, it is believed that the first towers date back to the years of 1135. The library in the castle is home to over 6000 books which was retrieved by the Government of Luxembourg. The castle itself is out of bounds for visitations but the lush green gardens around are accessible.

Next, on the list of the castles in Luxembourg include the Larochette castle. It is located in the central part of Luxembourg in Larochette itself. The construction of the castle dates back to the 11th century which was then destroyed because of a fire around 500 years later. Even with the infliction of this tragedy, some of the major aspects of the castle’s architecture was intact. This is what helps the visitors witness the beauty of the place around. The deep well found engraved with the stone walls further add to the beauty of the place. If legends are to be believed, it is said that this is the place a dragon was born. Visit the castle on Good Friday if possible.

The penultimate one on the list of castles in Luxembourg is the Walferdange Castle. It is a new castle in comparison to the prior ones. It was built and completely constructed in the year 1824. The majestic and grand approach of the castle was what attracted the attention of the royals following which they made it into a royal residence. The castle was also renovated by the Prince Henry of Luxembourg and also does host a varying amount of Literary Disciplines.

The last but not the least on the list of castles around Luxembourg is the Château de Septfontaines. It was built in 1783 by popular designers Jean-François and Pierre-Joseph Boch. The castle was used as a family base for these designers who made their own factory a few minutes away from there. The castle was later occupied by the French troops and was later sold out. The castle is not open for public visiting but does host a few conferences and meetings too.

The rich history and heritage of Luxembourg simple add to the grandeur of the country. If you are planning to visit to Europe and heading to Luxembourg any time soon, ensure that the Luxembourg Castles tour definitely make a part of your itinerary.