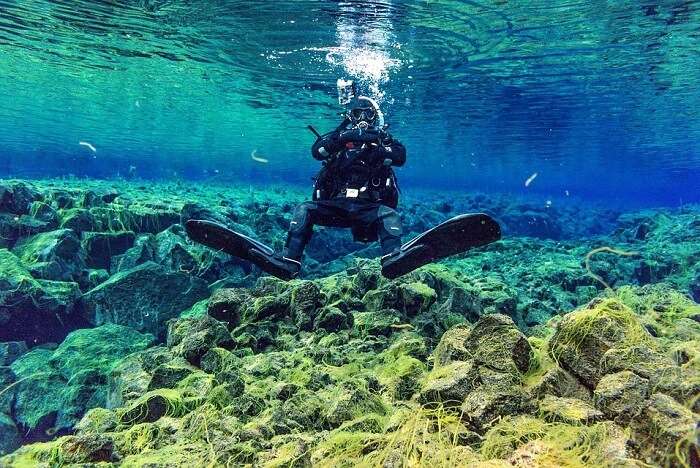 Europe is one of the most visited continents in the world. Millions of tourists go for a holiday to see enthralling cities and architecture. Everyone knows that underwater diving is the best way to experience marine life, but it requires you to purchase some super expensive equipment to be able to experience it.With most of the European countries, surrounded by the Mediterranean, Arctic and Atlantic Oceans, it makes it the prime destination for oceanic adventures. Snorkeling is one such thrilling sport that doesn’t require much equipment or practice to experience the amazing views of marine life in their natural habitat. We’ve prepared a list of 15 of the best destinations to go snorkeling in Europe.

15 Best Spots For Snorkeling In Europe

If you wish to do snorkeling in Europe, then Elafonisi beach is among the top 10 snorkeling spots in Europe. Located on the Crete Island in Greece in the Eastern Mediterranean Region, this place offers a diverse variety of marine life of the Mediterranean to the marine life enthusiasts. The clear blue waters shining like the clear sky let you witness the marine life clearly and allows you to explore the depths of the sea easily.

It is not only the well famed Mediterranean that’s great for snorkeling in Europe. The Black Sea, despite having water with many sediments, can also be a good place to snorkel. One of them is Russalka in Bulgaria, a top snorkeling destination in Europe. Although the marine life here is fairly small, you can see shipwrecks from the Ottoman era.

Image Source
Located just 10 km off the shore from Peniche in Portugal, Reserve Natural da Berlenga is a rocky island. Known for its natural and wild beauty, this place is one of the best places for experiencing great snorkeling in Europe. The areas near around the shoreline are among the greatest for snorkeling in Europe, having visible shipwrecks in the clear deep blue waters and a collection of some of the finest biodiversity known to man, this place is a wonderland for nature lovers.

After snorkeling in France, Italy and Spain, come visit the Adriatic Sea coast in Makarska in Croatia. The species here are completely different and the fresh water springs on the seabed allow the formations of some of the best coral reefs in Europe such as that of the Golden Sponge species. If you are lucky, you might spot a seahorse while snorkeling in Europe at this destination. It is indeed one of the best places to snorkel in Europe.

Best Time To Visit: May and June

Suggested Read: 25 Festivals In Europe That Will Up The Fun Factor Of Your Euro Tour

Maddalena Archipelago National Park is a national park located on the northern part of the Sardegna Island and all of its surrounding areas. Surrounded by the Mediterranean Sea, it is among some of the best snorkeling destinations in Europe. This place is like the best of both worlds and is one of the best places in Europe for snorkeling.

Best Time To Visit: April To May and September To October

Suggested Read: Shopping In Denmark: All About The Places To Shop For Best Danish Goods!

Considered to be among the best destinations for snorkeling holidays in Europe for 2020, Illes Medes is a protected marine reserve. This means that the growth of fishes and plants is natural here. The people here mind their own business, so you won’t be disturbed by those doing adventure activities at the beach. You’ll get the most fulfilling experience of snorkeling in Europe here.

Best Time To Visit: March To May (Spring) & September To November (Autumn)

Image Source
This is another great European place for marine life lovers and also considered to be one of the ideal places for snorkeling in Europe. The clear waters and caves with white sands here make the whole experience wholesome and fun. You can go explore the natural caves which are bustling shelters for fishes, and can also find some great variety of fishes at the sandy beaches. You can even find beautiful reefs in these waters and explore their beauty.

Best Time To Visit: April, May and June

Suggested Read: 11 Best Castles In Denmark To Witness The Unparalleled Beauty Of The Country

Nice has always been an important place for visitors to France, but it is really surprising how such a beautiful and serene place can exist near an industrialized town like this. Although the beach is really busy during the season, the water is crystal clear. Also, there are many diving companies offering dives but if you want to snorkel, then you can explore the less busy coves near the beach but that doesn’t mean you won’t have to look out for Jet Skis and things like that.

Image Source
Lake Silfra is a glacial lake. This means that the water is crystal clear and perfect place for snorkeling in Europe. There are water geysers nearby, which means that the water is fairly warm for snorkeling. You can witness various varieties of freshwater fishes here, and the visibility here is such that you can even see the fissures where the two continental plates meet. There is also a lagoon besides the lake with its shallow bottom which can be visible clearly from the top.

Best Time To Visit: Throughout The Year

Suggested Read: Our Trip To Europe In May Was Nothing Less Than A Dream Come True!

The red rock beaches around the small Mediterranean town of Isola Rossa are a great place to explore biodiversity among the beaches of Europe. This is also considered to be one of the best places to snorkel in Europe. There are a decent number of pools and inlets for exploring fishes and the water is crystal clear with some rare sediments. The reef as well as the beach is sandy and yet, full of life and biodiversity.

Best Time To Visit: April To May and September To October

Image Source
A really beautiful place in the Aegean Islands of Europe, snorkeling here can be a bit difficult because of low visibility due to presence of sediments. Snorkel in the rocky islands with hidden beaches to find some rare and exotic fishes. Some beaches have white sand stretching for miles. The best ones for snorkeling in Europe are the rocky ones.

Best Time To Visit: May To October

Famous for presence of both small as well as big caves, this small town along the eastern coast of Cyprus is amongst the best snorkeling places in Europe. The best places to snorkel here are small and secluded beaches and the area near the lighthouse. You can find all kind of marine animals here – from small unbothered fishes like the pipe fish to big marine animals like octopuses.

Best Time To Visit: May To November

Among the best and the most well-known snorkeling places in UK, Bovisand is situated near the Plymouth harbor. Protected by the bad weather, this place is an ideal snorkeling destination. The shallows in this place are sandy at the bottom but you have a good chance of seeing big fishes here. If you go a little further, you may have a chance of witnessing sharks. Without a doubt this is one of the best places for snorkeling in Europe.

Suggested Read: Europe In August 2019: A Handy Guide To A Relaxing Vacay

Among the smallest of the canary islands of Spain, this place offers some of the most exquisite snorkeling places in the whole of Europe. Located just 2 km away from the Island of Fuerteventura, this place is among the best spots for snorkeling enthusiasts. Now a protected marine reserve, the area remains undisturbed and the fishes and plants grow without any disturbance from the outside world.

Best Time To Visit:  March To May (Spring), September To November (Autumn)

Suggested Read: In Pictures: 35 Most Beautiful Cities In Europe Will Make You Want To Trip There In 2019!

Image Source
Located in the Tyrrhenian Sea, west of the Island of Sicily in Italy, this place is one of the best spots for snorkeling in Europe. You can find lots of fishes and species of marine animals in the clean waters here. Don’t miss this place if you’re visiting Italy. Make sure to wear safety gear while snorkeling in Europe and have a gala time.

Best Time To Visit: May To June And September To October

Suggested Read: 14 Essential Europe Travel Tips For The First-Timers Taking A Euro-cation In 2019!

Tips For Snorkeling In Europe

Q. Is there any good snorkeling in Europe?

A. Some of the best places for snorkeling in Europe are in Spain, Coast Brava, and Illes Medes. You get to witness natural marine plants and fishes while snorkeling.

Q. Where can I snorkel in the Mediterranean?

A. Though there no coral reefs to admire in the Mediterranean Sea one can still explore the marine life in Croatia, Spain, and France.

Q. What is the best time to go snorkeling?

A. The best time to snorkel is either late in the morning or early in the afternoon. This time has been decided according to the tidal waves.

Q. Is Croatia good for snorkeling?

A. Croatia is one of the best places to do snorkeling in Europe. Clear waters adorned with pebbles at the bottom give a good view of underwater life.

A. Snorkeling is comparatively considered easier than other water activities like scuba diving. So, it is not hard to do snorkeling.

Q. Is snorkeling safe for non-swimmers?

A. Yes, snorkeling is absolutely safe for even non-swimmers as it is a surface sport and snorkeling does not require to go deep into the water.

Q. Can you breathe underwater while snorkeling?

A. Yes, you can breathe while snorkeling. A tube is attached to the snorkel face mask that allows you to do normal breathing.

Q. What is the difference between snorkeling and scuba diving?

A. In snorkeling, you don’t go deep inside the water and you perform this activity while on the surface of the water. On the other hand, scuba diving is an intensive sport that requires certification and proper equipment to perform it. Moreover, this activity takes you deep inside the marine water to get a good look at the fishes and coral reefs.

Lithuania In Winter 2020: 10 Best Experiences That You Must Have For A Picture-Perfect Trip

Venice Carnival 2020: An Ultimate Guide For Witnessing The Lavish Extravaganza

Croatia Nightlife: 10 Best Party Places To Dance The Night Away In 2020!