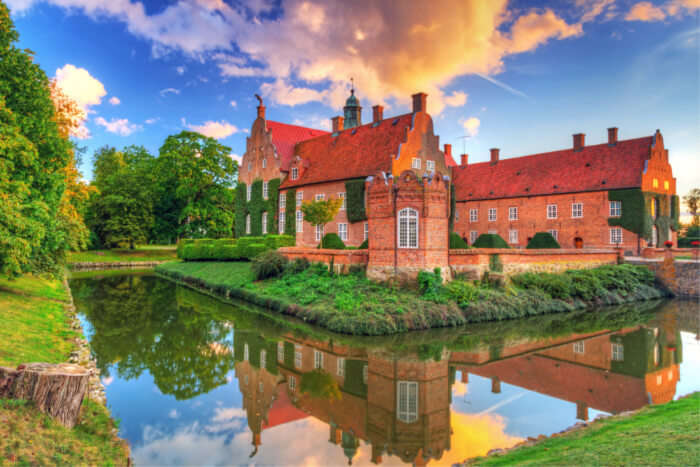 The Scandinavian country of Sweden is known for having an old-world medieval charm that can still be felt when you visit the Swedish cities of Stockholm, Gothenburg, Sigtuna and the likes. Apart from the cities, the famous castles in Sweden are ancient in their architecture as well as in ambiance. The Swedish castles have played a very important role in preserving the power and dignity of the country while standing tall as remarkable architectural structures, promptly reminding visitors of Sweden’s battleships.

Here is the list of the six best castles and palaces in Sweden that will make you want to go back in time and see how the royals lived their best lives.

The Gripsholm Castle in Sweden is one of the most popular castles in the country and is just about 60 kilometers away from the capital city of Stockholm. Lying by Lake Mälaren, the architecture of the castle will remind you of the European architectural designs. The castle houses antique furniture pieces, handicrafts and has suave interiors that date back four centuries. For art lovers, the walls of the castles are furnished with some artistic oil paintings that you will instantly fall in love with while the gardens are the best places to take romantic strolls. Just when you think you are done exploring the castle, you will see a herd of fallow deer walking around the Gripsholm Royal Farm as the castle is also home to a fallow deer reserve.

Getting to the Castle: To reach the Gripsholm castle, you can board the local train and alight at the Läggesta train station which is about three kilometers from the Gripsholm Castle. You can buy a combined ticket for the train which includes the bus ride that will take you to the castle.

The Kalmar Castle displays the history of the Castle that goes back eight centuries and explains the role of the castle as an important fortification as it is located close to the South, which was a Danish territory earlier. The Kalmar Castle still has a reconstructed version of a set table in the Grey Hall of the Castle that depicts the royals’ celebration of Easter. The Agda Chamber in the castle is known to be Duke Erik’s favorite mistress’ abode and is furnished royally, giving onlookers a taste of how the olden day mistresses lived. If your curiosity of the castle is still not satiated, read the texts, anecdotes, and tales about the Castle at the touchscreen installations in the Kalmar Castle itself.

The Trolleholm Castle lies in the southern part of Sweden called Scania. Trolleholm was formerly known as Kattisnabbe and Eriksholm before it came to be known as the Trolleholm Castle. Consisting of 110 houses, the castle is spread over 12300 acres and has beautiful gardens that will take you back to the Victorian Era. The castle is still privately owned by the Trolle-Bonde family who renovated the entire castle in 1887 and gave it the fairytale look that it has even today.

The Bohus Fortress, now a popular location for tours from Gothenburg was erected by Haakon V Magnusson, a Norwegian King in 1308 to protect the territory from Sweden. The Fortress successfully stayed on as a Nordic heritage and warded off a total of fourteen attacks from Sweden, Denmark, and Norway. Previously known as Bagahus, the Fortress was originally just a building constructed out of wood which was then made into a full-fledged stone castle with deep, dark dungeons meant to punish traitors. The Fortress is only about twenty minutes away from Gothenburg and lies on the old Norwegian-Swedish border.

Getting to the Fortress: You can reach the Bohus Fortress from Gothenburg by bus or you could even access the place by boat.

The word Örebro means a bridge over a graveled river as it is constructed on Svartån River, on an island. Primarily constructed to keep an eye on any gold or liquor smuggling along the river, the Örebro Castle is now fully open to the public and also hosts concerts throughout the year. It is nestled in the seventh largest city of Sweden, Örebro, and is a medieval-looking castle made with grey stones and daunting dungeons that became the most dreaded punishments for defaulters and prisoners. The Örebro Castle is easily one of the most beautiful castles Sweden, primarily because of its location.

The Drottningholm Palace is a majestic palace lined with royal gardens that make for the best visit on a sunny afternoon or a pleasant evening. The palace also happens to be a UNESCO World Heritage Site with architecture inspired by the style of the Chateau de Versailles. Visitors can learn about the royal history and witness the lifestyles of the Kings and Queens who lived in the Palace. The Palace is still the permanent abode of King Carl XVI Gustaf and Queen Silvia, residing in the south wing of the palace.

Getting to the Palace: One of the best travel routes to reach the Drottningholm Palace would be to take a cruise from Stadshusborn (Stockholm) through Lake Mälaren. It would take you about one hour to reach the Palace if you take the cruise. If you’re in a hurry and are looking for a more budget-friendly option, take a bus from Stockholm to the Drottningholm Palace, it’ll reach you to your destination in about thirty minutes.

Sweden’s history is full of glorious victories over battles that were fought against militaries from nearing regions that attempted to capture and dominate Sweden. If you’re planning a holiday in Europe soon, you definitely can’t miss a visit to the Castles and Palaces!