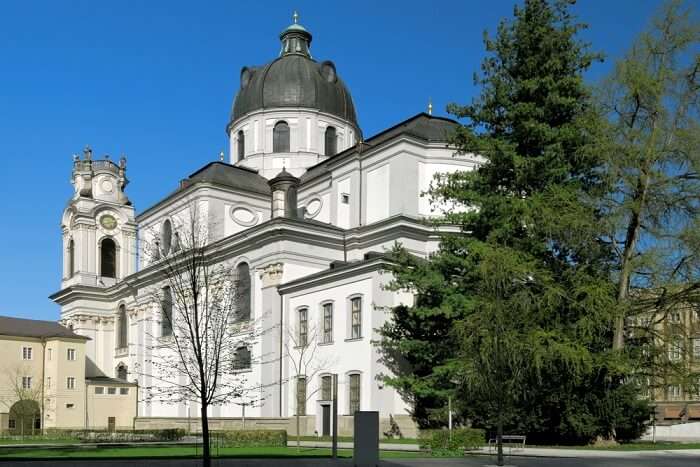 Salzburg has been an independent state for most of history. It is only since the last two hundred years that Salzburg has united with Austria. Before that, Salzburg was ruled by the church, which gives it the present name – the city of the church. Salzburg is quite famous for its architecture, the stunning details of its churches, the soothing holy music, and the local culture. Altogether, a trip to Salzburg is a spiritual one that allows you to take a glimpse into the rich history of this place. Because of the churches in Salzburg, this place has acquired the UNESCO World Heritage Status. The city is filled with churches, has a convent and even has its own catacombs.

At a single glance, you can view innumerable churches in this city. The horizon is lined with domes and old church towers. Salzburg is often called “Rome of the North” because of the omnipresent Baroque. Here is a list of some of the most popular Salzburg churches.

One of the most important churches in Salzburg is the Salzburg cathedral. It has a massive dome and is flanked by two towers on each side. It leaves its own unique mark on the city skyline. The Salzburg Cathedral is home to a lot of historical elements that have shaped this city over time. You can find the art installation called “Vanitas”, the chest that has the relics of Saints Rupert and Vigil, the art and the crypt of the time and more. The church also has a lot of secrets that still remain undiscovered.

This cathedral is the perfect tribute to the early art forms and their intricacies. The façade is constructed from Unterberg marble. You can also see the four monumental statues – the patron Saints Rupert and Vigil, holding a salt vessel and a model of the church itself, and also Apostles Peter and Paul, who hold a key and a sword. The cathedral was initially built back in the year 767. It was under the rule of the bishop Virgil that the first construction happened. Then, it was reconstructed again throughout the ages, in the year 1628 and 1959. You can see the impression of the different times in the architecture.

Must Read: 10 Places To Visit In Salzburg For A Perfect Holiday In The Most Musical City Of Europe!

The Franciscan church in Salzburg has a slender steeple that makes it impossible to miss. The church itself is made from two parts. The original central part has features that resemble the Roman architectural style. The chancel is the other part that features a Gothic style. The church is known for the various architectural styles that it combines together under one roof. This church goes back all the ways to the early days of Christianity in the city. However, it has been through a lot of crisis and has even been ravaged by fire. However, during the 12th century, it was reconstructed and was a symbol of the merchant class. Again, in the 15th century, it was renovated by the middle class of the city.

The Franciscan church is often thought to be older than the Cathedral itself. It houses the famous painting of “Madonna with Child” by Michael Pacher. The interior of the church has been modified several times under the rule of the different archbishops. Presently, it has multiple connecting walkways and has nine different chapels.

The Franciscan church is often thought to be older than the Cathedral itself. It houses the famous painting of “Madonna with Child” by Michael Pacher. The interior of the church has been modified several times under the rule of the different archbishops. Presently, it has multiple connecting walkways and has nine different chapels.

Suggested Read: 10 Super Awesome Things To Do In Salzburg, The Birthplace Of Mozart

St. Peter's Church in Salzburg has been the spiritual heart of the city since the 7th century. Not only is this church famous for the distinctive Christian architecture, but is it is also known for the famous movie “The Sound of Music”. Commonly referred to as the Sound of Music church in Salzburg, this place also comes with its cemetery and catacombs.

The Frankish missionary Rupert founded the church. Till date, it is the oldest monastic order in the German-speaking regions. The church has experienced several fires and has been restored over and over again. The restoration work over the different times gives this church its own distinctive look. You can see the Roman, Renaissance and the Rococo elements in the architecture. The St. Peter’s Abbey is famous for its Long Gallery. It housed the painting collected of Prince-Archbishop Guidobald von Thun. The corridor itself had an Italian style which had windows on one side and paintings on the other. The St. Peter’s Cemetery is one of the oldest and most beautiful in the world. The intricate gravestones and the ambiance of the region contribute to the captivating atmosphere. Many eminent personalities, including Mozart’s sister’s final resting place, was this church.

The Collegiate Church in Salzburg has gained a lot of reputation for being the center of music and arts in the city of Mozart. The Collegiate Church is also known as the University Church. It was constructed by Johann Bernhard Fischer von Erlach and since the beginning, the place has had an exciting history. The church itself has a unique design. Compared to other churches, the décor of this place is much simpler. This makes it a perfect place for art exhibitions and concerts where the intricacies of the church design can take the background. During the ancient times, the church was the place of cultivation of law, theology, medicine, and philosophy. The church lost its original purpose when the city came under the Bavarian rule. However, now, the church has been reopened for concerts and art exhibitions.

Located at one corner of the city, the Maria Plain church has been a popular pilgrimage destination for Christians. The church itself is not as impressive as the ones located in the heart of the city, but it has gained a lot of popularity for its surrounding views of nature. The church itself was founded during the time of the Thirty Years War. The interior is filled with gold, whites and blue. The famous painting by Maria Plain is located in the high altar. The church is now famous for the panoramic views of the Salzburg city.

Further Read: Hohensalzburg Castle: Witness The Glorious Architecture Of Austria The Country Is Proud Of

Salzburg has numerous churches and it is impossible to cover all during a short vacation. However, this list will surely come in handy for those who are looking forward to visiting the most popular ones. So, what are you waiting for? Plan your trip to Austria for a unique holiday experience with your loved ones! Excited already?

How many churches are in Salzburg Austria?

There are 27 churches in Salzburg.

What are the famous churches in Salzburg?

Why is St. Peter’s church famous in Salzburg?

Why should I visit Salzburg?

Salzburg is renowned for being the birthplace of the famous composer Mozart. Salzburg has also become a mecca for classical music. One can feel Mozart’s influence all around here. You would really enjoy the soothing live music here and will also find various talented musicians that can be spotted really easily here.

What is the best time to visit Salzburg?

The most ideal time to visit Salzburg is from September to the month of October, it is the time when the weather is nice and you would be able to make the most of your trip.

What are the best attractions in Salzburg?

How many days in Salzburg is enough?

Though Salzburg is a small city, it is like the size of an average large town. We would recommend you to keep 4 days for a Salzburg trip.