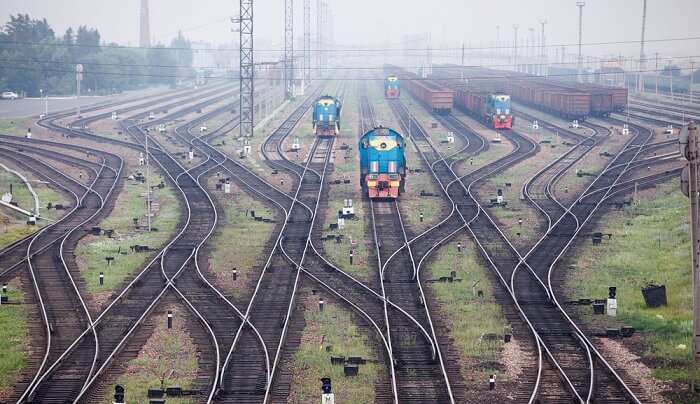 There are two types of people in the world, one who prefers to travel by air and others who love train journeys. If you fall into the latter category, this news is going to be a delight to you. Getting from Delhi to Mumbai in 10 hours is now very much possible as Indian Railways decides to give Rajdhani railway tracks an upgrade.

After approval of the Central Govt, Mumbai – Delhi route will be upgraded to run Rajdhani Express at 160 kmph to cut the travel time to nearly 10 hrs, under #MissionRaftaar pic.twitter.com/hSYFrSAii4

Earlier, Rajdhani Express Mumbai to Delhi (and opposite) used to take 15-16 hours to complete the journey but now it will only take 10 hours to reach Aamchi Mumbai from Dil wali Dilli. This development is a part of #MissionRaftaar launched by Indian railways back in 2017 to upgrade all the long route fast trains and make them faster and better. Delhi-Mumbai Rajdhani Express is one of the 100 trains to get the upgrade.

However, the operation will be completed by the year 2023. Currently, the train runs at a speed of 130 kmph. To reduce the travel time to 10 hours, it should run at a speed of 160 kmph which is only possible if the existing tracks are replaced with heavyweight ones to support the speed.

If Delhi is the heart of this country, then Mumbai is the soul of it. No wonder it is one of the busiest routes in the country. With Mumbai to Delhi Rajdhani travel time significantly reduced, more than one lakh people will benefit.

Indian Railways is also planning to electrify the whole rail network by the year 2022 to decrease the dependency on diesel and reduce the operational cost of locomotives. Good to see Indian Railways headed on a green track.

With Delhi Mumbai Expressway nearing its completion and a faster Rajdhani under pipeline, nothing can stop you from taking that exciting trip to Mumbai. The ‘city of dreams’ is a fascinating place to visit.

Q. Which train is set to reach Mumbai from Delhi in 10 hours?

A. The Rajdhani Express which is already plying between Mumbai and Delhi is all set to reach the destination in 10 hours. This comes as a huge delight to the passengers. This project falls under the Central Government initiative called the Mission Raftar.

Q. What is the usual train journey duration from Delhi to Mumbai?

A. The usual train journey duration between Mumbai and Delhi is 15.5 hours when traveled via Rajdhani Express. Some trains take up to even 30 hours to reach the destination.

Q. When is the completion date of Mission Raftar?

A. The completion date of Mission Raftar is around 2022-23. The duration is because the infrastructure of the railways needs to be increased to facilitate the travel of high-speed trains.

Q. Has the Mission Raftar received wide acclaim from the citizens of India?

A. The Mission Raftar is aimed at increasing the speed of freight and passenger trains on some of the busiest routes in the country. This has received a wide welcome from those who use trains to travel regularly.

Q. How much time can one save by travelling in Rajdhani Express?

Q. Are there any special amenities offered to the travelers who travel using Rajdhani Express?

A. The Rajdhani Express is fully air-conditioned. The passengers are served breakfast, dinner, lunch, snacks and other refreshments depending on the travel time. All these are included in the train fare.

Q. How much is the revised train fare for Rajdhani Express?

A. The minimum price for the Rajdhani Express starts from Rs 2200 and it goes up to Rs. 4000. The revision might increase to Rs. 500 minima to the train fare. This also depends on the AC tier.

Q. Why Rajdhani Express is preferred by those who travel by train regularly?

A. Rajdhani Express provides the best comfort. The maintenance of the train is very good. The train is also known to reach on time usually and is super fast saving a lot of the journey time. The food is provided during the journey. These are some of the reasons why people prefer Rajdhani Express over other trains.

7 Fun Places To Hangout In Mumbai With Friends And Chill Together In 2020!